Manage Your Fire Risk Without Jeopardizing Your Productivity

Steel production is an industry where situations occur every day that can be classified as dangerous. With operations involving heavy equipment and liquid or red-hot steel, the danger of fire is ever present. And fire hazards are often exacerbated when mineral oil-based hydraulic fluids are used.

A fire results in the risk of personal injuries, as well as a likelihood of loss in both capital and production. These losses include not only damage to the building and equipment, but also encompass interruptions in production that can idle production lines for days, or even months.

One cause of fire in a steel production plant is the ignition of mineral oil hydraulic fluids. The highest risk of fire in a steel production plant is the operations where the processed materials reach temperatures +/-1652°F up to >2732°F (+/-900°C up to > 1500°C). In most of these processes, hydraulic units are used to operate the equipment, and in many cases, a mineral oil-based hydraulic fluid is used to fuel the hydraulic unit. While mineral oil has the definite advantage of a good cost-performance ratio, it is a distillate from crude oil and not always the safest choice due to its tendency to catch fire easily. Fortunately, there are alternatives available to manage this risk and reduce the chance of an ignition without jeopardizing the performance or productivity. 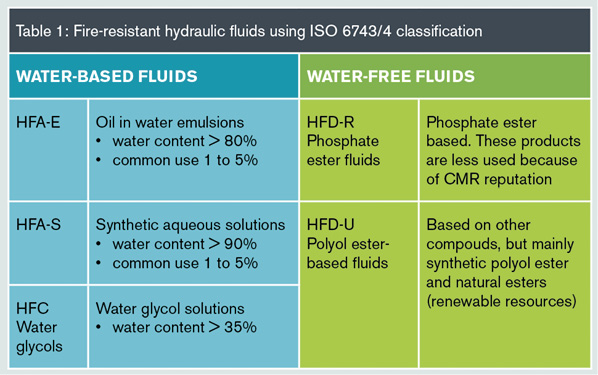 For each fluid type, there are both pros and cons. Table 2 shows a comparison of the performance properties of several hydraulic fluid types. The properties shown are considered important by both maintenance managers, as well as purchasers. 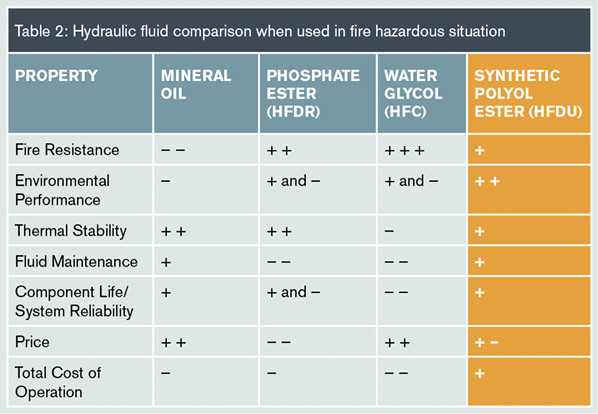 “Fire-resistant” is often misunderstood to be the same as “fire-retardant”—or the ability to suppress a flame. The only hydraulic fluids that can truly be considered fire-retardant are the high water content (HFA) fluids. Almost all fire-resistant hydraulic fluids will burn under certain conditions. HFC fluids will ignite if a certain amount of water evaporates. And while most HFD-U fluids will burn, they will not cause the ignition-like explosion that the mineral oil will, which leads to an uncontrollable situation.

Fluids can be tested to determine their fire resistance. The most common and generally accepted tests are those used by Factory Mutual (FM Global), the testing and approval arm of a major industrial insurance underwriter (www.fmglobal.com). By using an FM Global-approved hydraulic fluid, manufacturers can often reduce their insurance premium. Many other organizations and companies have also developed fire-resistance tests, usually to simulate a certain type of real-world accident.

Polyol ester technology has been in use for about half a century and in many fire-hazardous applications in steel mills—from blast furnaces to hot strip mills. If a manufacturer makes the decision to change to a polyol ester fluid in their hydraulic system, the conversion process is not complicated. Typically, no changes need to be made to the hydraulic unit when converting from a mineral oil or water glycol hydraulic fluid to a polyol ester fluid. That said, the conversion must be done with care because there are several grades and qualities of polyol ester (HFD-U) fluids available on the market.

The important checks that must be performed are not only compatibility evaluations with the existing mineral oil, but also the paint inside the tank, seals, hoses, valves, and pump. In the end, tests will show that the type of paint is critical (single-component paints can be incompatible), as well as pump approvals. It is also important to remember that several different suppliers exist for polyol ester fluids, but most pump builders only approve some suppliers without any restriction on rpm and maximum pressure. Experience teaches that when paint compatibility is good, no changes or restrictions are needed for the hydraulic system. To guarantee the fire resistance of the new fluid, less than 5% residual mineral oil should remain.

1. A customer was operating a billet caster with a standard mineral oil-based hydraulic fluid. In this specific application, there were frequent hose ruptures that caused the oil to be splashed on the recently still-hot casted billets. Each time a rupture occurred, the fluid ignited into a massive fire with vapor clouds forming into fire balls. The fires were difficult to get under control, and each one caused hours of production lost due to downtime. After the customer switched to a fire-resistant hydraulic fluid, while the hose ruptures still took place (as it is induced by the surrounding environment), no more explosions of vapors took place and the situation was quickly under control.

3. Although seen as a relative cold area, many fires take place at the pickling line, specifically the hydraulic welder. Several accidents have been reported where hydraulic hoses ruptured and mineral oil-based hydraulic fluid came as a jet stream, landing on the just-generated weld or welding sparks, and set the whole area on fire. This not only caused severe damage in the surrounding area, but also idled the production line for several months. By switching to a fire-resistant hydraulic fluid, the risk of fire spreading to other areas of the plant was strongly reduced, as was long, costly downtime.

4. A steel customer was using mobile equipment to transport hot slag from its steel-making facility when an accident took place. The equipment’s mineral oil-based hydraulic fluid caught fire, and the mobile equipment was burned beyond repair. All the customer’s mobile units were immediately converted to a water-free, fire-resistant hydraulic fluid.