The nozzle/flapper servo valve was invented and developed by Bill Moog shortly after World War II and was quickly incorporated into military applications. In the decades since then, the performance, reliability, and cost of these motion-control components have made them stand the test of time and endure an onslaught of new technologies. While many new servo actuation systems use electromechanical (EM) and electrohydrostatic (EHA) technology, electrohydraulic (EH) servo controls remain prevalent because pre-existing component designs and mature supply chains result in costs and development times that electrified systems often can’t match.

EH servo systems are highly modular and have development costs that can be a fraction of equivalent EM or EHA solutions in certain applications. Commercial EH hardware that is designed and suited for aerospace and defense applications, such as pumps, accumulators, cylinders, and plumbing, are readily available in various sizes and performance ranges. These elements are easily pieced together with lightly customized components, such as manifolds and valves, to create a system that balances cost and performance. A practical EH servo system can be compiled from these components to meet the needs of a unique application in as quickly as a few days. While other technologies are still being designed, an EH system may already be available for delivery. EH servo systems often offer performance comparable to EM or EHA counterparts while shedding many of their cost and lead-time downsides, offering project management benefits critical in today’s fast-paced, cost-sensitive environment. The Moog servo valve is at the heart of these systems and is one of the most easily modified components to yield significant performance improvements. While an EH solution is not always the best approach for an application, overlooking this proven technology without consideration is ill advised.

Every theater of military operation continues to use and develop EH servo valve systems. Servo valves can be found in difficult air, sea, and land applications ranging from missile and torpedo steering to motion control of vehicle-mounted weapons.

Bill Moog’s innovative servo valve remains a relevant technology in missile applications today.  The first application of Moog’s invention was the Bumblebee Missile Program, which resulted in the U.S. Navy’s 3-T missiles – Talos, Terrier, and Tartar. They are today’s Standard Missile family. In the 1950s, the newly developed servo valve unlocked the ability to accurately position a control surface under high loads with fast dynamic response, all inside the small tail section of a fast-moving missile. As control actuation needs evolved and missiles continuously grew smaller, pneumatic actuation became widely used. This is largely because the actuation media – gas – can be dramatically compressed into high-pressure reservoirs, reducing the size and weight of the power source for the actuation system. Pneumatics are well-suited for single-use actuation or short-duration proportional control. The drive for longer flight times, among other requirements, pushed missile steering control toward EM actuation systems. As electrical power storage capabilities improved, EM actuation systems became a viable missile steering control methodology.

In recent years, the maturation of additive manufacturing capabilities has affected the trade between hydraulic, pneumatic, and electric control actuation solutions. Additively manufactured components naturally align with hydraulic systems, as flow paths for the fluids can be dramatically optimized when compared to traditional subtractively machined designs. This manufacturing capability allows hydraulic solutions, along with their servo valve “brains,” to be integrated into almost any envelope or configuration, as the additive manufacturing design can effectively use whatever space is available inside a volume-constrained missile.

With heritage applications and new opportunities unlocked by complementary technology, servo valves remain relevant to the missile-steering market today. Moog is actively manufacturing and delivering servo valves to provide proportional steering control to missile control surfaces on various platforms around the world. Servo valves represent a mature and well-understood solution in the control-systems world and remain a viable method to solve many control-actuation needs. 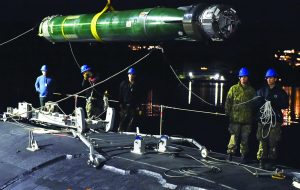 For the U.S. Navy, servo valves are key to both survivability and lethality. Servo valves have been entrusted with catching planes on the decks of aircraft carriers for more than half a century and managing turbine controls on nuclear-powered ships and submarines. However, they’ve also been critically employed on one of the most lethal maritime weapons in history, the Mark 48 heavyweight torpedo.

At 19 feet (6 meters) long and 21 inches (53 cm) in diameter, the Mark 48 carries a 1,000-pound (453-kg)
high-explosive warhead. It weighs between 3,400 and 3,700 pounds (1,542 and 1,678 kg)
and travels at speeds greater than 32 mph.
It’s capable of destroying a large enemy combatant by detonating underneath and severing the keel of an enemy ship or rupturing the pressure hull of an enemy submarine. With stealthy acoustic improvements, upgraded sensor platforms, and advanced guidance and control systems, the Mark 48 is arguably the most feared and regarded antiship and antisubmarine weapon in existence.

The Mark 48 was developed in the 1950s and ’60s for effectiveness against the Soviet Union’s rapidly advancing submarine technology. Officially operational in 1972, the Mark 48 became the principle weapon of U.S. Navy submarines. The Mark 48 is also employed by NATO allies such as Canada, Australia, and the Netherlands.

Consistently and accurately steering the Mark 48
under the ice of the Arctic and through the open oceans proved challenging. Temperature, salinity, current, and thermocline variations are unique environmental challenges not found in many actuation applications. With fluid power, the torpedo actuates linear cylinders that use crank arms to rotate each of the four control surfaces, or fins. These fins give full steering and depth control to the torpedo, allowing it to track its target and circle back should it miss its initial mark. The original servo valve that controls those linear steering actuators has remained largely unchanged, a testament to its enduring design and performance.

Power density was a critical requirement in the design phase of the Mark 48, as each ounce shed in the design allowed the torpedo to carry more fuel for greater stand-off ranges. Hydraulic steering control gave the highest performance and greatest power density, and servo valves ensured weapon accuracy. With the compact, lightweight design of the Moog 30 Series valve, additional fuel storage extended the torpedo’s range beyond five miles. Multiple iterations of the steering fin control system were designed and tested for optimization, and thanks to the modularity of the servo valve design, various performance characteristics were quickly and cheaply tuned through various valve modifications. Null cut changes on the bushing and spool assembly allowed the control system to reduce unwanted movements within the torpedo’s flight path. Adjusting flow gains on the servo valves helped optimize steering response, improving accuracy, and ensuring an “on-target” hit. Improving pressure compensation capabilities of the servo valve helped the Mark 48 reach greater depths than any previous torpedo and ensured that it reached even the most advanced subs at their depth limits.

While submarines and surface combatants have undergone revolutionary design changes over the past half-century, the servo valve has remained largely unchanged across all platforms. 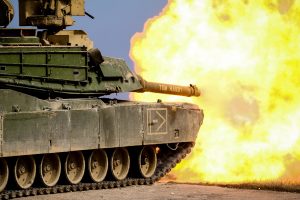 On military ground vehicles, servo valves provide precision motion control of stabilized turreted weapon systems and critical positioning of missile launch platforms. Moog technology is used extensively to control elevation and traverse motion in both applications. Stabilized motion control is an essential capability in modern military fighting vehicles. Servo valves keep turreted weapons on target while the vehicle is traversing rough terrain and reacting to the recoil caused by firing the cannon. Hydraulic drives are the solution of choice for large-caliber platforms like main battle tanks and mobile artillery, and Moog servo valves are at the heart of those systems. These turrets, often wielding barrels with bore diameters ranging from 120 to 155 mm (5 to 6 inches), require the power density and high bandwidth of Moog servo valves to achieve performance under often high unbalanced loads. Missile-launching platforms differ from turreted weapons in that they typically execute their mission from a stationary position. As a result, missile launchers rarely require stabilized motion control. The job for these servo valves is to move a launcher payload weighing several tons from rest at one position to rest at the farthest extreme in a matter of a few seconds. This application requires high rates of acceleration and hydraulic braking, which are profiled carefully to meet the mission objective without overturning the platform or damaging sensitive equipment.

Over time, systems are saddled with new mission equipment to help maintain readiness. However, those new capabilities come at a cost to the performance of the hydraulic drive systems because they have to overcome the increased weight and inertia of the system. In these cases, servo valves employed in conjunction with increased system pressure restore and even increase performance beyond the original design points. These cost-effective modernization efforts allow technology insertion to the current force and extend the service life of the platforms. λ