Fourteen years ago I had vision for a global racing league that would pit multiple world-class athletes in head-to-head competitions through complex technical obstacle courses wearing giant powered exoskeletons, or mech suits.

At that point, such machines were only ever depicted in science fiction, such as the legendary power loader in the timeless 1986 James Cameron classic “Aliens.” Cameron came back with a much more agile and aggressive mech suit when we saw the advanced mobility platform suit in 2009’s “Avatar.” While these were both inspirational pieces of technology, they had one key thing in common that limited their utility: they were not real. This would make using them to develop a large-scale mech racing league fairly challenging. There appeared to be only one solution: I had to develop the technology myself.

The first thing to do was to define a mech and then establish the qualities of a sports mech. We had many design constraints and criteria.

It should be fun. That’s what makes it a sport. Fun can involve serious engineering that translates to comfortable, learnable, stable, and responsive. If it has automation, that’s not fun. If it is an untameable beast, that is also not fun. Achieving that balance between challenging and rewarding is at the heart of what defines a good sport.

It had to be lightweight, which is not something that usually figures heavily in off-highway hydraulic equipment. But in a sport machine, dynamic loads become more significant and weight is king. It needed to be 100% electric powered. It required high efficiency. Solving inefficiency by adding more radiators and power would add weight, particularly when batteries are used, offering diminishing returns.

The machine needed to be simple, which should be a criterion for any design. But when it comes to learning to walk, we knew we’d already be challenged, so the fewer degrees of freedom the better. We had to make sure it was safe. Anyone who’s ever learned a new sport knows that falling is an inevitable part of the learning process. The machine had to be able to fall over with zero damage and injury to the pilot. Finally, it had to be an all-terrain machine capable of covering ground that a similarly sized 4×4 or tracked vehicle could not.

With the basic design parameters established, we began developing the hydraulics and motion controls. Over the course of 10 years I assembled a community of volunteers, students, and industry sponsors who believed in the project. We were based in the lab space of the Energy Awareness Through ART (eatART) Foundation, an educational charity I cofounded in 2007. The foundation supports the creation of large-scale, technically sophisticated projects used to educate people about the role of energy and to raise questions about its social and environmental impact. Within the creative crucible of the eatART laboratory, our team was able to develop a fully functional, ridable 2:3 scale prototype leg mounted on a tower. It was called the Alpha Leg. This prototype validated the core assumption that a pilot could control a giant limb with an exoskeletal interface while being hurled around by that same limb. It also yielded a first-generation exoskeletal control system, electrohydraulic power plant, and leg architecture that would become the foundation for the full-sized mech.

It is often said that we make great steps forward in technology standing on the shoulders of giants. The giants were the millennia of technological innovation that brought us to the current state of the art. Perhaps more literally, the giants in this case are giant excavators and other large-scale articulated hydraulic machinery. But the giants on whose shoulders you stand must be headed in the right direction. When it came time to scale the technology in the Alpha Leg and put it on a mobile, dynamically balancing, untethered mech and create a hydraulic sports machine, we still needed to make substantial upgrades.

From Alpha Leg to sports mech 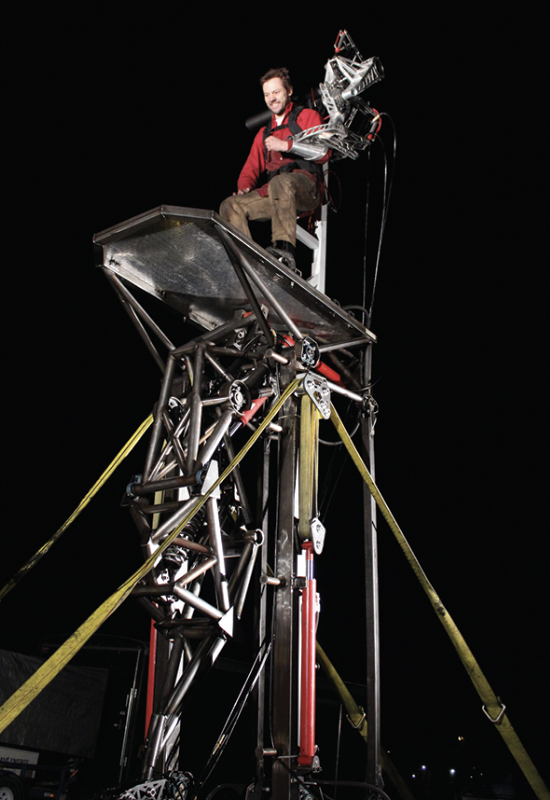 The next stage was designing the mech itself, which was done from the pilot outward. It started with an ergonomic exoskeletal control system on the pilot’s body to pick up the movements of his limbs. That exoframe was then suspended on a three-degree-of-freedom suspension system to cushion the pilot from any impacts. Around that, a robust, CrMo steel cage and chassis were designed to hold the pilot, batteries, and hydraulic power plant. The chassis sported four massive, impact-absorbing bumper bars, two at the front and two at the rear, mounted on dual air shocks to soak up the impact when the machine fell over. The legs came next. They were simple and identical for ease of manufacture. The knee joint was placed halfway up the limb, incorporating multiple high-end King racing shocks to provide 50 cm (19 in.) of suspension travel. The four legs pivoted on a shared hip axis. The legs were sized proportionally with the chassis, which allowed for a 4.3-m (14-foot) stride. To move the 400-kg (1,000-pound) steel limbs and make this behemoth walk, we custom engineered a 96-volt battery pack that used 350 kg (770 pounds) of lithium ion batteries to run twin AC electric motors. The motors drove two hydraulic pumps for a total power output of approximately 200 hp.

With core technology in place and a mech design based on 10 years of development and testing, we attracted investment from global technology leader Furrion and in 2016 formed Furrion Exo-Bionics, which provided the resources to build our flagship prototype mech, Prosthesis: The Anti-Robot. The result was a 4,000-kg (8,818-pound), all-terrain mech suit capable of stepping onto objects as high as 1.2 m (4 feet). In fact, it was so large it was named the world’s largest quadrupedal exoskeleton and appears in the 2020 “Guinness World Records.”

One of the differences between the Alpha Leg and the full-sized mech was it had to carry its power plant. Carried on a two-story experimental waking machine operated by a rookie pilot, it was thrown around a lot. The mech would regularly go from face-plant to face-up in seconds. A conventional, rigid, vented fluid-reservoir tank was out of the question; keeping the outlet under the oil line was by no means a sure thing. The solution was a pair of Smart Reservoirs. This ingenious device uses an expandable bladder to account for the volume changes produced by cylinder movements and thermal expansion, allowing a sealed hydraulic system with no air to be pulled into pump inlets. It had the additional advantage of providing 1-5 psi positive inlet pressure to the pumps, allowing them to run at max flow without risk of cavitation.

With the pumps well fed and the pilot safely strapped in, the process of learning to walk began. This was the crux of the whole project. Prosthesis has no autonomy or gyro stabilization; it relies entirely on the pilot’s movements. 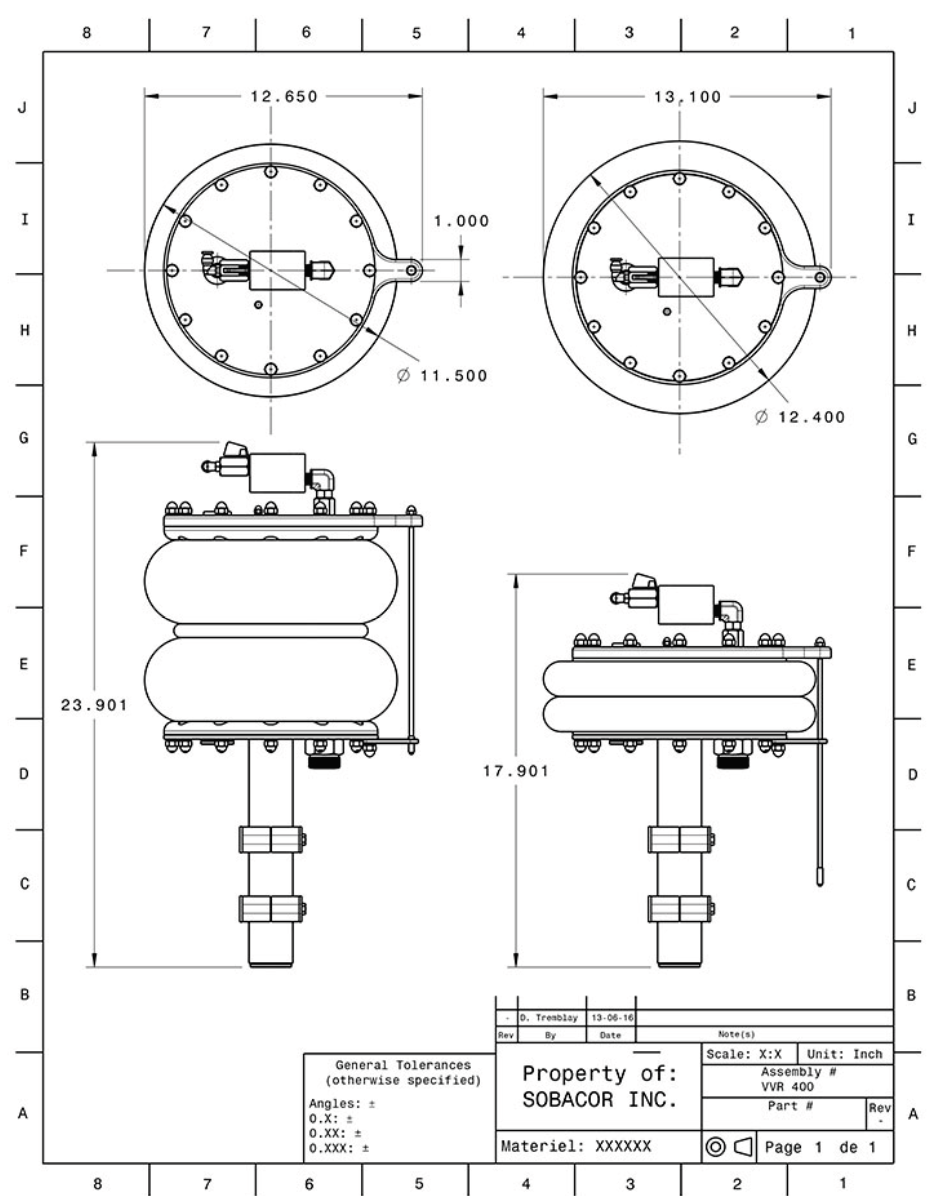 The first thing that became apparent was that walking produced a wildly varying duty cycle for the pumps. One solution would be larger variable-flow axial piston pumps, which would have created an upgrade cascade effect through the powertrain resulting in substantial weight increases. A more weight-efficient solution to meeting spikes in power demand was accumulators, but standard steel accumulators are also heavy.

So we found ultra-lightweight carbon-fiber accumulators made by a company called Steelhead Composites that were one-quarter the weight of their traditional steel counterparts.

After about two years of intensive field trials that were equal parts engineering and pilot training, we had a reliable machine that followed the pilot’s movements accurately. But we were still having difficulty achieving a smooth, dynamic gait. The hydraulic circuit we were using to control cylinder movement was developed with valuable input from the applications team at Hydraforce and drew on decades of knowledge and leading valve technology. It took hundreds of hours in the pilot seat, however, to realize that the state of the art was not going to work for this new breed of machine. Traditional heavy-duty hydraulic circuits favor strength and precision, with an emphasis on minimizing operator fatigue. 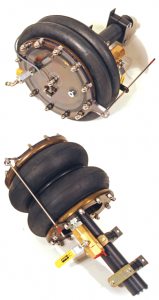 Sports machines are different. They have a more visceral relationship to their operators. Rather than the operator just moving the machine where he wants it, an athlete wants to feel the machine more directly and appreciate the momentum and kinematics of the machine. This allows the pilot and the machine system to benefit from the human nervous system, one of the most sophisticated motion-control systems around.

Through some bold and unconventional innovations, we eventually developed a proprietary valve circuit and motion-control code that, at first, seemed to turn the mech into a wild animal. It was so wild, in fact, that the first time we tried it we wrote it off as unusable and returned to our original technology. It wasn’t until I had gained many more hours of piloting experience that I was able to harness intense and immediate control over the machine. To new pilots it still seems wild and at times alarming, but to me it just feels like a sporty mech suit.

With 200 hp, ultraresponsive controls, and a 4,082-kg (9,000-pound) mech to balance, the massive legs started making fast moves. We were seeing linear motions in 50-mm (2-in.) bore cylinders on the order of 254cm/sec (100 in./sec). The basic utility cylinders we used up to this point were heating up and being torn in half on a regular basis. The speeds and forces at play were substantial. If we had mechanical-limit stops on our joints, the mass of the structures would have been excessive, and even the most skilled pilot could not be relied on to bring each of the eight joints to a gentle stop in both directions all the time. We needed a smarter machine, something that would let the pilot focus on speed and agility without holding back.

This brings us to the next chapter in the evolution of the sports mech – smart cylinders. We chose internal MTS sensors because we needed the 100 μm accuracy and durability they provide, and we had new hip and knee cylinders custom engineered by Edmonton-based RHK Hydraulic Cylinder Services. Not only do the new cylinders incorporate the MTS sensors, but they have massively oversized ports placed to optimize hose routing and minimize flow restrictions. They also have integrated hydraulic cushions at the extension limit to mitigate the shock loading as the pilot pushes the limits of the leg travel in a quest for more speed. 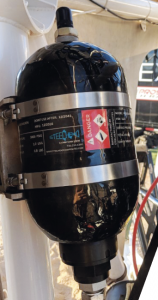 These cylinders represent a major step forward in the evolution of mech technology. High-accuracy positional awareness will open up a spectrum of performance improvements, such as cylinder travel limit endpoint control and nonlinear pilot input mapping that takes into account mech position to produce a more consistent piloting experience throughout the full range of motion. It will also enable the gathering of valuable data for the calculation of joint velocities, joint-specific duty cycles, efficiency, and the development of a simulator for training or even remote operation.

Despite mech suits being fantasized about for decades, Prosthesis is the first and only mech suit of this scale and with this level of power and agility. But it is just the beginning. It is essentially the Kitty Hawk of mech development, and the potential for this technology is just beginning to be appreciated. There is still a long journey ahead, and there is still lots of room for improvement, particularly with lightweight higher-efficiency components and systems. 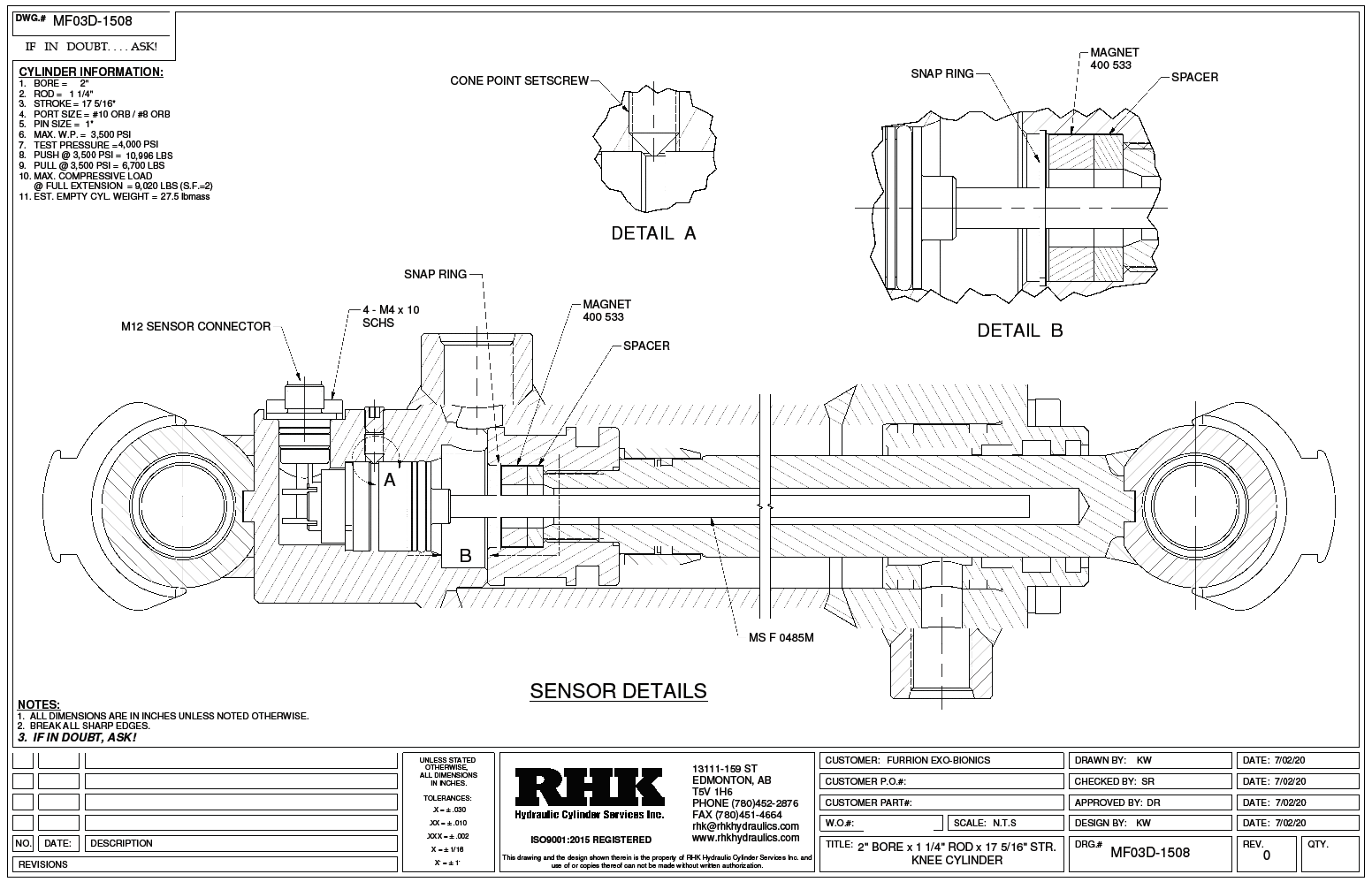