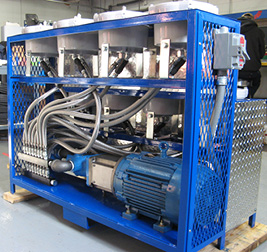 Doctors call hypertension, or high blood pressure, the “silent killer.” According to the CDC, one in three adults in the U.S. suffer from hypertension, which increases the risk of heart disease and stroke, and costs us almost $48 billion annually in medical costs. The CDC estimates that 20% of Americans who have hypertension are not aware of their condition and its associated risks.1

Hydraulic, gear lube, diesel fuel, and engine oil systems have their own “silent killer”: particle contamination. A three-year independent study run by Caterpillar found that “some hydraulic components lasted up to 10 times longer with proper contamination control.”2 An SAE study found that adding bypass filtration “can reduce the [engine] wear rate to less than half.”3 It is a safe bet that a huge percentage of bulk fluid storage tanks suffer from the “silent killer” of contamination and that a tremendous amount of money is spent to repair the resulting problems.

Bulk fluid storage tanks often have no filtration system whatsoever. As the tank is continually refilled with new fluid, which is already dirty, contamination that has collected from the many transfers from refinery to customer builds up in the tank and is conveyed to fluid systems serviced by the tank. Like viruses transferred by a contaminated hypodermic needle, hard particles (read: “mini-rocks”) are transferred from the tank to system components at 3,000 – 5,000 psi. The result? Accelerated wear on pumps, valves, seals, fuel injectors, and other high-cost components.

PIRTEK in Chicago was confronted by the issue of bulk tank contamination when a major railroad company approached them with a huge challenge: a 7,000-gallon lube oil top-off tank for their locomotives. This tank had no filtration system and was delivering dirty oil to massive diesel engines, causing component failure known to be associated with contamination. A 300,000-gallon diesel fuel top-off tank at the same location, also without a filtration system, was similarly causing accelerated fuel injector failure.

The Precision Filtration Systems PFS100 filtration unit is an ideal solution for this application. Each PFS100 cartridge can hold 5,000 grams of material (40-50x the capacity of a spin-on filter) and removes 99.95% of water, ultimately slowing the buildup of sulfuric acid and extending alkaline reserves in engine oil. With the inlet and outlet holes bored out to a larger diameter, the PFS100 can deliver over two gallons per minute of flow, enabling it to handle the demanding requirements of bulk tank filtration.

PIRTEK in Chicago found that a solution to filtering the customer’s extremely large bulk tanks was the PFS800XD, a unit featuring 8x PFS100 units, an integrated 5-hp motor and 20-gpm pump, electronic load monitor with auto-shutoff, and a custom rack and mounting system.

The PFS800XD will clean the bulk tank fluids 24/7, providing constant protection against contamination buildup – the “silent killer” – and preventing failure of high-cost components.