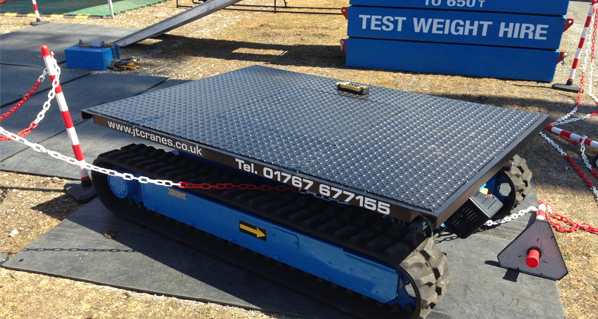 As a family firm of crane specialists, John Taylor Crane Services of Bedfordshire, U.K., developed an innovative tracked platform intended to reduce the need for manual handling. This tracked carrier platform was designed to operate where forklifts and other machinery could not maneuver. 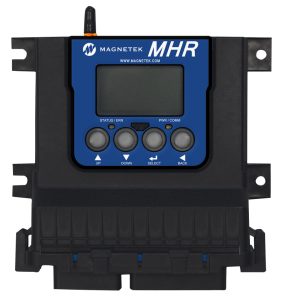 Magnetek, a brand of Columbus McKinnon, was challenged by JT Cranes to provide a flexible wireless solution that had the capacity for future enhancements. This wireless solution needed to increase maneuverability and safety for lifted loads, allow operators better control of carrier speed, and decrease the footprint of existing controls.

Magnetek, working in concert with JT Cranes, designed a custom eight-button handheld wireless control system that improved directional accuracy by using buttons configured with proportional control and incorporated four modes of adjustable speed settings for precision control. The system’s transmitter and receiver occupied limited space on the carrier platform, which left a smaller footprint than traditional crane systems and could not handle a large control package.

Mounted on continuous tracks and positioned low to the ground, the tracked carrier platform can easily move across rough indoor or outdoor terrain and traverse ramps of up to 40°. It is able to carry loads up to four tons despite its compact design. Its load carrying platform can rotate 360°, allowing for enhanced maneuverability as compared to standard crane systems. JT Cranes looked to incorporate flexible and precise wireless controls into these carrier systems to enhance their versatility. The tracked carrier platform required the highest levels of maneuverability for lifting in small spaces, moving forward and backward, and getting around tight corners and through standard doorways.

While JT Cranes originally considered a larger belly-box transmitter for the application, they discovered a more compact, versatile option better suited to their requirements: the Magnetek eight-button Flex Pro transmitter. Flex Pro offers precise management and smooth control of all functions. Smooth movements are essential for successful carrier operation, particularly when moving fragile loads, such as art pieces. Any uneven lifts or unwanted movement while the carrier platform traverses an area or during a lift could mean dropped loads or damaged material. 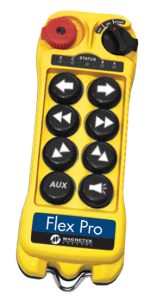 The Flex Pro transmitter was customized by Magnetek to meet the carrier’s exact needs, providing adjustable speed control in a four-mode setting to deliver 25, 50, 75, or 100% output for precise machine movement. Additionally, the stepless variable speed control ensures that operators have an enhanced level of control over the carrier while it is in motion. With its tough nylon housing and NEMA 4 (IP66) rating, the Flex Pro is made to withstand shock and sealed to operate in a variety of harsh, industrial environments.

The Flex Pro transmitter is paired with Magnetek’s patented MHR radio controller, which combines the components of a radio receiver and up to 16 hydraulic proportional valve controllers into a single convenient unit, reducing costs and freeing up valuable space on the equipment. The MHR utilizes an informative graphic display to easily view system settings and machine functions. Two-way feedback provides operators with precise information about equipment performance. The MHR’s rugged, waterproof design makes it ideal for outdoor use and harsh environments. Magnetek’s transmitter and receiver system improved the level of control operators had over the tracked carrier. Proportional control provided smooth movements for the safety of lifted loads and greater spatial control for maneuvering the D40 in tight spaces.

The Flex Pro and MHR integrated so easily with the D40 that JT Cranes plans to install the system on additional tracked carriers. The systems’ flexibility also makes future enhancements, such as engine start-up buttons, a simple modification.