According to the U.S. Department of Energy, some 10% of all the energy consumed by industrial plants is used to power air compressors. A startling fact is that much of this energy is wasted due to inefficient compressor controls. The problem is that many compressors are controlled locally, either by mechanical valves and pressure switches or by electrical controls at the compressor. When controlled in this manner, it is not unusual to have multiple compressors running at partial load. In addition to using energy inefficiently, this situation results in unnecessary component wear and compressors fighting each other in an attempt to maintain pressure and airflow at different levels. The waste and extra cost as a result of operating compressors in this way can be greatly reduced or eliminated by installing a central control unit to manage the compressors.

Fig. 1 shows a typical scenario that was uncovered during an energy audit of Ball Corp.’s aluminum container plant in Springdale, Ark. As the plot shows, each of the plant’s five air compressors was in continuous operation with the load fluctuating significantly from time to time on several of the compressors. In order to compensate for inefficient controls, pressure set points were set higher than needed so that the minimum air requirements of the plant were met at all times.
All of these factors combined to waste a significant amount of electrical energy. Across the industry, with proper central control systems in place, as much as 40% of the energy previously used to power a plant’s compressors could be saved.

One of the first types of central controllers to be developed some 20 years ago was the sequencer. A sequencer activates compressors according to a pre-determined order as the controller works to achieve a pressure range or target pressure. At most, one compressor is allowed to run at partial output, while others are configured to run at full load or they are turned off completely. The result is a marked reduction in energy usage. For example, when a PL1000 target sequencing controller manufactured by Pneu-Logic Corp. (Portland, Ore.) was installed at the Ball manufacturing plant mentioned above, rather than all five compressors running virtually all the time, the compressed air needs of the plant were met by at most just three compressors: one or two compressors at full load and a third compressor (a new variable-speed trim compressor) running at partial load as required. Fig. 2 shows the result of an energy audit made after the plant upgrade. 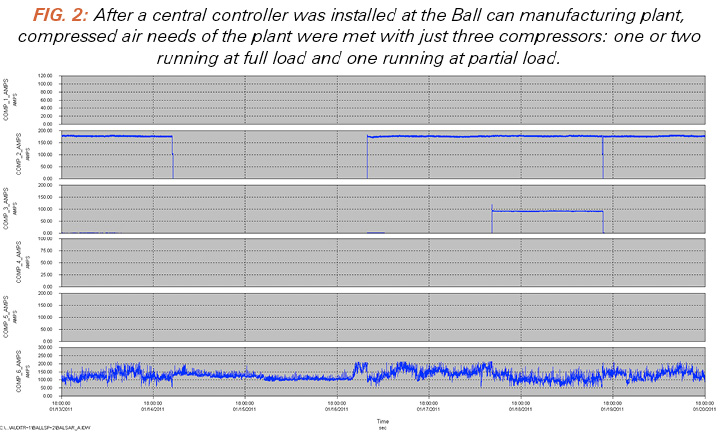 With the new controls, the pressure at the plant is more stable (+/- approximately 3 psi) compared to the old scheme whereby the pressure was being maintained +/-12 psi, allowing Ball to reduce the average discharge pressure by 10 psi, thereby further reducing energy use. The average savings in horsepower achieved by the upgrade was more than 20% of the total horsepower used by the compressor network. The post-upgrade audit revealed that the system pressure could be reduced by an additional 6 psi due to the precise control implemented by the sequencer. With this level of savings, payback on the control system investment was achieved very quickly.

GO WITH THE FLOW AND IMPROVE RESULTS

Most compressed air control methodologies rely on pressure. This is the basic concept behind sequencers, which control solely on pressure. While this methodology can effectively and efficiently control compressors, it is not intelligent in selecting exactly which compressors to run at a given load to maximize efficiency. In order to pick the best compressor configuration, the solution is to monitor the flow of air, not just the pressure. With this additional data, the control system can select which compressors best meet the demand.

Flow can be calculated based on a number of parameters or measured directly. Transducers can be placed at critical locations throughout the plant (Fig. 3). A central controller can then work directly with data collected from the transducers. 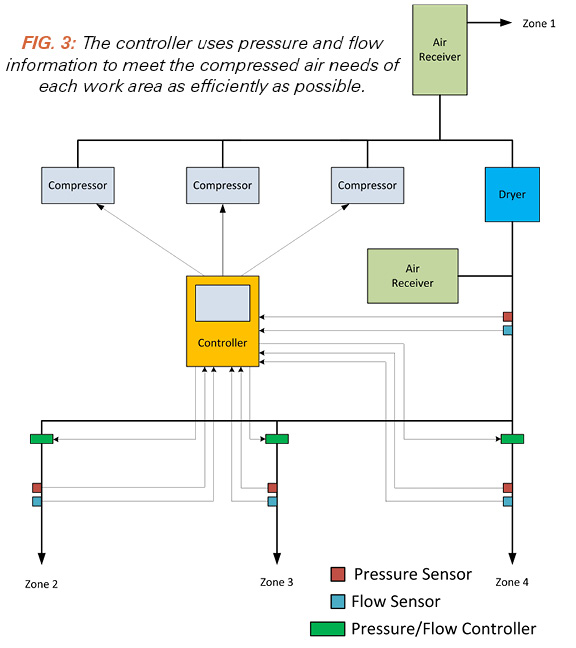 Though effective in implementing basic control functions, a limitation of some sequencers is the lack of flexibility in implementing different control strategies, whereas some applications can benefit from more sophisticated control systems. An improvement over a controller that employs a fixed set of rules for selecting which compressor to run next is a unit that uses scoring. With scoring, the central controller makes decisions on which compressor to run based on the availability of compressors and a score that is assigned to each compressor (which serves as a measure of a compressor’s “readiness”). When environmental factors change or preventive maintenance milestones are reached for a particular compressor, the controller can automatically respond with a new set of decision rules. 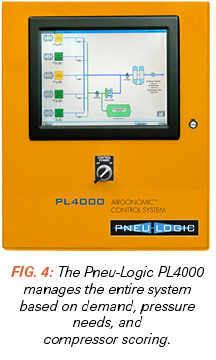 An example of a controller that uses scoring is the Pneu-Logic PL4000 (Fig. 4). This unit gives users continuous real-time control of all compressors, regardless of manufacturer, compressor type, age, size, or efficiency. It assigns each compressor a run-time score that changes with time as the compressor runs and as air demand changes. Run-time scoring enables the controller to predict when operating compressors should be turned off and replaced with compressors in reserve. When a compressor hits a threshold, the control system can give it a break and turns on another from the same group, with a similar capability, to replace it. The up-to-date decision space is reflected in the controller’s staging table (Fig. 5), which is displayed on the system’s operator screen, and which can be monitored and further interrogated to verify that the system is operating correctly.

To take into account other external control factors that should be worked into the mix, the control system should accept user-defined inputs. For example, by incorporating production forecasts or production rates, the control system can accommodate compressor maintenance during slack periods, or it can flag when the system will be called upon to operate in a specific way to best serve production. The ability to incorporate user-defined inputs into the mix can also be used by plant engineers to test out different control strategies or allow for additional factors to be rolled into the control equation. Or, the strategies for selecting specific compressors to run can be changed over time as a factory’s production mix changes, proactively selecting a “recipe” that describes the compressed air resource that is required to serve a particular production run. Alternately, the mix of compressors needed to serve a particular work shift can be set up to support a specific maintenance strategy that decreases maintenance costs. 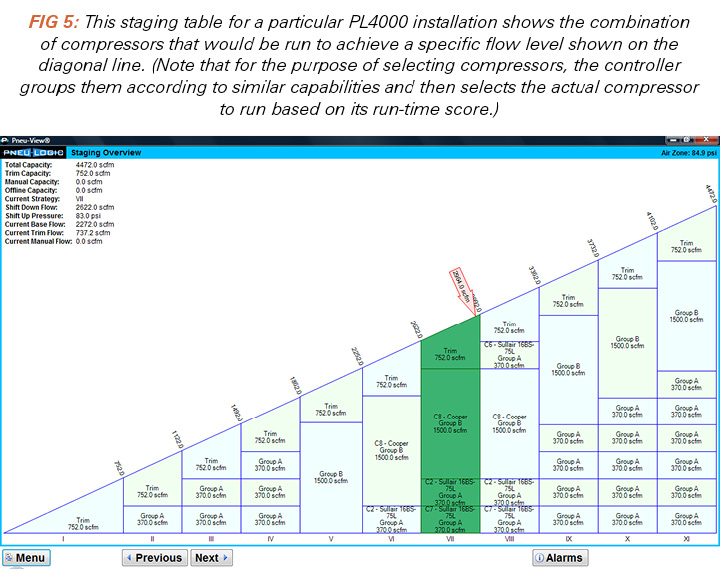 With the ability to monitor and respond to multiple air pressure and flow sensors comes the ability to also manage different pressure levels throughout a plant. As Fig. 3 shows, a factory’s compressors and compressed air delivery systems can be organized into networks that may be optimized to use energy most efficiently and to provide backup air sources when needed. The control system can take inputs from certain zones of the plant, certain pieces of equipment, and production lines or machine centers, and then provide just the right amount of air at just the right time to meet those needs. Zones supporting inactive production lines can be closed off as well, thereby reducing the overall leak load.
With active controls at their fingertips, plant managers should no longer regard the cost of compressed air to be an issue that affects facilities managers only. In fact, plant air supply has a variable cost like any resource used in the manufacturing process, and it can be controlled to maximize productivity and minimize waste. In recognition of this, we refer to all of the functions that a controller performs to actively manage compressor resources to meet air demand while minimizing costs by the name Airgonomics™.

By using a flexible controller, such as one of the Pneu-Logic units described above, plant operators can be assured another industry “best practice” is in place and is contributing to overall air system efficiency. Along with effective controls come the monitoring, trending, and reporting tools necessary to fully understand and effectively manage/optimize plant-wide compressed air systems.