Sometimes it’s not enough to simply close the control loop. Traditional control algorithms rely on eliminating an error between what is happening (as indicated by feedback from sensors in the system) and what you want to have happen. High-speed motion controllers have become good at doing this quickly. But what if, for reasons of product quality, there can be no striking errors in the first place—for example, if a metal car part is being stamped and the risk of making the impression too quickly or too heavily must be avoided? The stamping press could be moved more slowly, but the productivity of the machine would be limited. To perform the process as quickly as possible requires some innovation in how the control algorithm is set up. Dayton Die Cushions of Eden Prairie, Minn., is doing just such innovation. 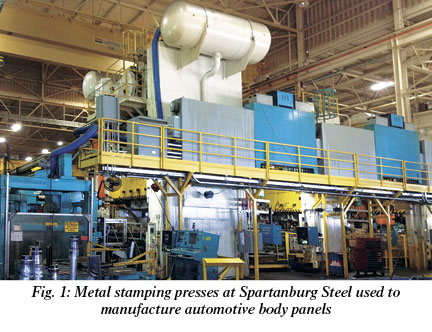 Die cushions are hydraulically operated platforms that reside under the die in a stamping machine and move to cushion and oppose the motion of the main press ram (Fig. 1). A die cushion typically pinches the periphery of a work piece (which starts out as a flat metal blank) with various pad pressures in order to control the rate at which the work piece is pressed into the die by the main ram. Use of die cushion devices enables automotive components, such as body panels, to be manufactured to tighter tolerances and with features, such as bends, that would not be attainable with press-only stamping operations.

Fig. 2 shows a CAD drawing of a die cushion manufactured by Dayton Die Cushions to retrofit a stamping machine in use by Spartanburg Steel Products of Spartanburg, S.C. The Spartanburg machine wasn’t initially designed with a die cushion, but plant managers understood that in order to supply more of the new-generation body panels to the car companies, they would need the capabilities and precision that a die cushion could give them. So they contacted Dayton Die Cushions and asked them to perform the retrofit.

Challenges that needed to be met in the course of the retrofit project included fitting the new machine components within the physical constraints of the existing machine. “We had to take the motion of the existing ram into account in order to make sure that the new cushion could work with it,” said Tom Pedersen, manager of Dayton Die Cushions. “The old press had a distorted bed, and we needed to align the structure before we would add our hardware. We reconstituted the bed with adjustable guides that were aligned with a 3D laser to within 0.001 inch.”

The new die cushion needed to come into contact with the work piece as the press ram was already in motion and moving at a very high velocity, which in turn required the hydraulics to come alive before the die was actually contacted by the ram. This is in contrast to traditional presses, which wait until the ram hits the cushion before the cushion moves. The contact causes the hydraulic pressure to spike and generates an error in the closed-loop algorithm, which produces a response according to the algorithm. But that method wouldn’t work in this application. 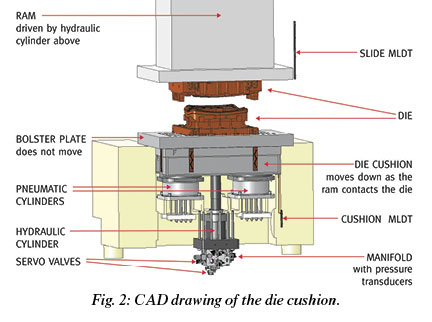 “We couldn’t tolerate the collision,” said Pedersen. “Instead, we looked for a way of predicting the collision and beginning to take action before the ram hits the work piece.” Another problem issue was the responsiveness of the valve. If the cushion’s hydraulic controller waits too long to begin increasing oil flow to the valve, the time lag could cause damage to the work piece. The oil needs to get moving in time to move the cushion just as the ram is about to make contact.

The solution that Dayton Die Cushion worked out was to use a programmable motion controller that was capable of setting up a virtual motion axis that a physical axis could be geared to. “Gearing” refers to the ability for the motion of a slave axis to follow a master axis, which can be another physical axis or a virtual one that exists only inside the motion controller. “We create a virtual closure of the die cushion control loop before the ram hits the cushion,” said Pedersen. “No one had ever done this before.” With the virtual control loop closed, the oil flow is initiated before the die cushion comes into contact with the ram, so the two hydraulic systems come together smoothly, even though the ram is moving quickly with tremendous kinetic energy.

To get high dynamics, the Dayton Die Cushions team selected a servo valve that had high flow but very low mass. Another design objective was to minimize the volume of oil flow, reduce the size of the HPU, and reduce oil conditioning (cooling, filtering, etc.). If the die cushion application was done entirely with hydraulics, it would be difficult to get enough fluid moving in the volume and time required (the cushion in the Spartanburg press measures 125 inches x 69 inches and must be capable of providing 250 tons of maximum holding force), so Dayton Die Cushions incorporated two passive pneumatic cylinders beside the hydraulic cylinder to reduce the amount of hydraulic oil that must be moved (the cylinders are shown in Fig. 2). The pneumatic cylinders provide the base tonnage of the cushion, and the variable tonnage that assists in shaping the work piece is provided by the hydraulic cylinder. 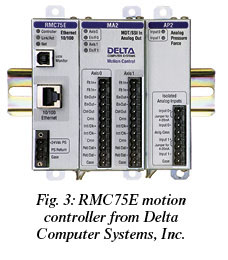 To implement the hydraulic controls, Aleksandra Spiess, an engineer at Dayton Die Cushions, selected the RMC75 electro-hydraulic motion controller (Fig. 3) from Delta Computer Systems, Inc., Battle Ground, Wash. “The RMC75 can run four separate task execution engines simultaneously,” said Pedersen. Within Delta’s RMCTools software, each task can also run any of several user programs, one at a time. “We assigned one of the tasks to be a dedicated computation engine working in the background. A PLC wouldn’t have been fast enough to do what the RMC does.”

The motion controller connects to two servo valves, which can be controlled independently. Each valve is assigned to a separate control axis of the RMC75 (the RMC75 can control up to two axes at the same time). “We want to be able to move extra oil to the tank when we need to move the die cushion very quickly,” said Pedersen. “The ram moves very fast when the cushion first hits and then slows down as the compression operation completes.”

The new die cushion uses two Balluff magnetostrictive linear displacement transducers (MLDTs) with synchronous serial interface (SSI) inputs to the Delta motion controller and Hydac high-speed pressure sensors. One LDT measures the position of the ram and the other measures the position of the cushion. Just before the ram contacts the cushion, the RMC75 opens the valves and starts moving oil through the manifold. Then, at ram contact, the RMC75 runs a pressure control loop as the cushion moves down. At the bottom of the stroke, as the ram reverses direction and goes back up, the RMC is programmed to switch to position control mode, causing the die cushion to quickly rise, just in time to meet a robotic arm that picks the finished part out of the die.

“The cushion needs to be up in a certain time window, repeatably, to meet the transfer arm,” said Pedersen. “This required adaptive closed-loop control since the temperature and hence the flow properties of the oil are changing dynamically.” Another challenge that was met by the Delta controller was being able to work with existing off-the-shelf valves, which Dayton had to use since the lead times for any new-valve manufacturing were too long to meet the goals of the project.

The Dayton Die Cushions team took three iterations to complete the motion control program for the Delta controller. The last one was in conjunction with the plant’s own controls engineers. “As we went through the iterations, we had a tremendous amount of help from Delta’s engineers,” said Pedersen. “For example, they taught us how to use the RMC-75’s S-curve instruction, which initiates a smooth acceleration and deceleration to avoid hydraulic shock.  They also helped to incorporate feed-forward parameters into the control loop, predictive terms that help speed up the response of the control algorithm.” The team used Delta’s RMCTools Plot Manager software to prove the functionality of the system graphically and optimally tune the control-loop gains. Saving time in completing the design was important because Dayton’s customer, Spartanburg Steel, was in a hurry to put tooling in place to support the new automotive model year.

The die cushion design by Dayton Die Cushions is an example of how hydraulic control systems are getting smarter in order to meet the increasing productivity and quality demands of modern automotive manufacturing. A key component of the new machines that makes this possible is the programmable electro-hydraulic motion controller.