Because air is a compressible fluid, controlling the speed of actuators is a unique problem. A pressurized air cylinder that is not under load will extend and/or return suddenly if the exhaust air is not controlled. This is often the case and is not likely to cause damage since most air cylinders are engineered with shock pads or incorporate external stops on the cylinder rod to prevent the piston from bottoming internally against the head and cap ends. Unlike hydraulics, most pneumatic applications require full extension or full retraction without an intermediate position.

It is necessary to understand the load dynamics that are present and to calculate the load ratio (LR) to achieve accurate speed control. This extra force, beyond the load force requirements, determines how fast the load can accelerate.

Energy tip: While increasing the supply pressure may cause the acceleration rate to increase, it is done at a higher energy cost. Acceleration requirements need to be evaluated. When slower acceleration will work, doing so will save energy costs.

A positive speed control is obtained by throttling the inlet or exhaust air of the cylinder by means of a speed controller, which is a combination of a check valve, to allow free flow towards the cylinder, and an adjustable throttle (needle valve).

Metering out is a common method for controlling double-acting cylinders. This is not to say that air cannot be metered into a cylinder to control velocity. However, unless a constant restrictive load is being moved, the cylinder will lurch as air pressure builds to the requirement of the load. Then the air expands suddenly in the cylinder, dropping the pressure, only to repeat the process and lurch again.

Safety tip: Because oil mist is a potential hazard to personnel and OSHA mandates allowable exposure limits, the use of a coalescing muffler after the quick exhaust valve may be necessary.

The rpm of air motors, on the other hand, is commonly controlled by the pressure at the inlet. Many air motors power constant loads, so it is as effective to regulate the inlet pressure as it is to provide a restriction at the inlet or outlet that wastes power needlessly.

The figure illustrates a double-acting cylinder mounted vertically with a load hanging on the cylinder rod. If the flow controls were to be reversed for meter-in control, the load would drop suddenly when the solenoid valve is signalled to lower the load. Meter-in flow control would cause uncontrollable lowering and a hazardous condition. 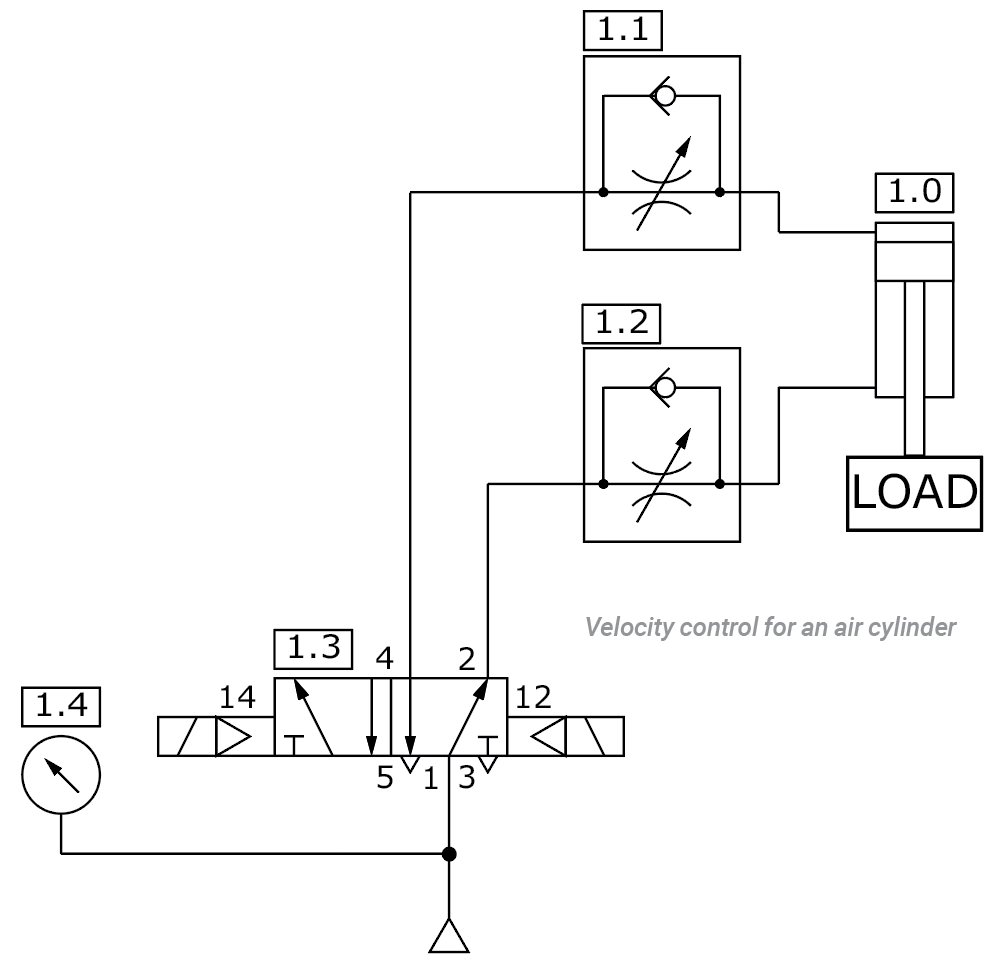 Referring to the figure, which valve configuration would require the lowest pressure while the load is being lifted?

a. Remove the flow control at valve 1.2.