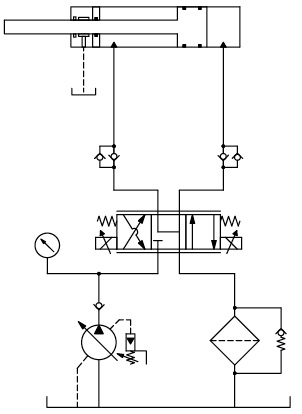 In the food and pharmaceutical processing industries, leaking actuators can contaminate products and increase waste, not to mention the possibility of contaminated product getting out to the public. Generally, food-grade hydraulic oil is utilized, but this could affect the taste, and some consumers could be allergic to the oil.

Hydraulic cylinders in these industries are installed with an additional outboard rod-cap seal as an additional safety measure in case the main rod seal starts to leak. This is commonly referred to as “drain-back.” In effect, it makes two rod seals, in series, with a clear plastic tube draining the area between the two caps. The clear plastic tubing would drain any leaking oil back to tank before it had a chance to drip on the product. Drain lines like these are one of the rare examples where terminating drain lines above the fluid level should be used. These drain tubes are routinely checked for signs of oil leakage so the maintenance technician could schedule a cylinder replacement at a shutdown.

The cylinder in question was located approximately 40 ft. above the hydraulic power unit (HPU). The unusual drain line with 5-psi checks would ensure fresh, clean oil migrating to the cylinders and return oil making it back to the tank. The D05 (NG10) proportional directional valve was mounted on the HPU.

The food industry is very sensitive about intellectual property and system designs. When I was asked to troubleshoot a problem that developed with one of the cylinders used on a new meatball manufacturing process, they had large covers around the process so that the only thing I could see when I arrived was the HPU unit. I was not allowed to see the complete circuit design, just the attached part of the circuit (see illustration).

The problem was two-fold. If the line stopped for more than 15 to 20 seconds, the cylinder would drift in the retract direction and trip a fault sensor. Moreover, every time they shifted the proportional valve, it would cause the cylinder to “jump” as if there were air in the system. They felt they cycled the system sufficiently to remove the air, but it continued to jump and lurch when actuated. They unplugged the electrical signal to the proportional valve in an attempt to stop the drifting, but the cylinder would still drift.

Drifting: The problem causing the cylinder to drift and retract was the weight of the 40-ft columns of oil, which opened the return checks and created a vacuum on both sides of the cylinder.

The return 5-psi checks needed stronger springs to keep them from opening. Oil weight is approximately 0.4 psi per foot times 40 ft, or 16 psi, or approximately 30″Hg vacuum. The larger cap-end area of the cylinder with a vacuum caused it to drift.

Lurching: Proportional coil armatures will jump if air is in the coils. Many proportional valves have coil air bleed screws. A lot of designs would install 5-psi checks in the tank line before the filter to help facilitate the removal of the trapped air.

One thought on “Drifting and Lurching Cylinder on Food-Processing Equipment”