The Effect of High Temperature on Sealing Material

As the oil and gas industry moves to recover more challenging reserves and enters the development of High Pressure High Temperature (HPHT) fields, it is imperative that operators understand the effects of high-temperature exposure of sealing materials within water-based hydraulic fluids. Until now, these two materials have not been thoroughly tested together at high temperatures.

Water glycol fluids consist of a solution of water, ethylene, or diethylene glycol, usually a high molecular weight polyglycol and an additive package. The water-to-glycol mixture typically contains 38% to 45% water. These fluids usually contain red, pink, or other colored dye to aid in their identification.

With water in the formulation, evaporation is ongoing, and upper operating temperature limits must be considered. Water loss can cause an imbalance relative to the additives and adversely affect viscosity, pH, and lubrication quality. Periodic checks of the water content must be made and water added to the system if required. Added water must be distilled or soft de-ionized because the calcium and magnesium present in potable water will react with additives, causing them to precipitate out of the fluid and compromise fluid performance. Ideally, operating temperatures should be kept below 65°C to minimize evaporation, though in practice they can be significantly higher.

Why Use Water-based Hydraulic Fluids?

Water-based hydraulic fluids are widely used in oil and gas, mining, hot-rolling mills, and similar applications where the potential for fire could cause catastrophic consequences. They are also replacing traditional oil-based HLP fluids in applications where environmental regulations must be observed. As a result, they have become more prevalent in many applications within offshore energy production as a means of protecting people, the environment, and resources. Low- viscosity versions operate more effectively than do oil-based HLP fluids over long distances, and the low compressibility of water gives faster response times.

HFC fluids are the most common hydrous, fire-resistant hydraulic fluids because they have the best fire resistance and hydraulic properties. They are also used wherever hydraulic fluid escaping under high pressure can ignite on contact with hot materials. At temperatures above 600°C, these fluids should not ignite or continue to burn. They can be used at ambient temperatures of -20°C to +65°C and up to working pressures of 250 bar.

The fire resistant and environmentally friendly qualities of HFC fluids make them ideal for use in offshore installations, whether on surface equipment, such as motion compensation cylinders, or on subsea equipment when used as a control fluid to operate valves and blow-out preventers. The fire-resistant properties mean greater fire safety, offering more time to initiate fire-fighting measures and bring people to safety in the event of an accident.

Other Considerations with HFC Fluids

It’s critical that the hydraulic fluid does not negatively affect the materials used in the components within any system that uses HFC fluids. Compatibility with coatings, seals, hoses, metals, and plastics should be observed to prolong the service life and integrity of equipment.

Oil and gas hydraulic applications often involve demanding dynamic movements. For instance, sealing systems in offshore motion compensation cylinders can be subjected to significant wear due to long strokes. Compared to oil-based HLP media, the water base of HFC fluids typically produces different reactions within the traditional sealing materials used in these applications. The different reactions can range from lower lubricity relative to dynamic sealing elements, to corrosion concerns of supporting metal hardware, to compatibly with sealing polymers. 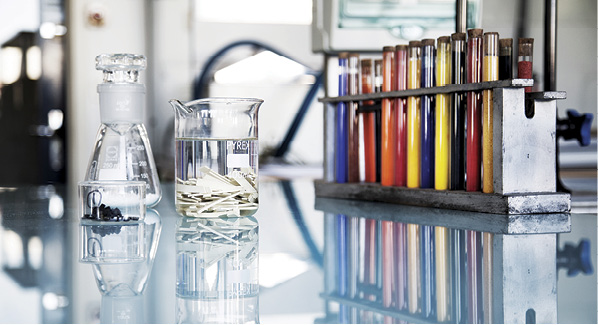 The tests took place over a 90-day period in 2016 in three Trelleborg labs: Stuttgart, Germany; Tewksbury, England; Fort Wayne, Indiana. Each seal and fluid combination was tested for hardness change, tensile strength change, strain change, and volume change. Each seal was photographed before and after the test to document all physical changes.

Trelleborg undertook a series of tests on a number of elastomeric and thermoplastic sealing materials to investigate the effect of immersion in HFC fluids at a range of elevated temperatures up to +200°C.

Relative to elastomer materials, the testing highlighted that while HNBR (XploR® H9T20 & H9T21) exhibits relatively small changes in hardness, volume, and strain with Oceanic HW 740 R (and other HFC fluids) up to +70°C, there is a more pronounced change in these properties when the test is performed at temperatures of +135°C. The HNBR property change from +70°C to +135°C is expected and typical because rubber materials generally lose properties as temperature increases. Therefore, the test results for HNBR are well within acceptable seal performance and operational limits and suggest the best combination of compatibility and material property retention at temperatures up to +135°C.

In applications where temperatures are above +135°C, industry professionals would typically look to FKM (Fluoropolymer) materials to provide a solution. However, our testing illustrates that water-based HFC fluids create a significant change to the properties of FKM at both +70°C and +135°C. As a result, FKM would not typically be recommended for any applications involving these fluids.

By comparison, we see relatively small changes in the properties of perfluoroelastomer Isolast® J9513 and Turcon® PTFE materials. At temperatures above +135°C, these materials offer a potential solution when dealing with high temperature applications that involve HFC fluids. More and more deep sea wells are reaching temperatures up to +200°C and additional testing within Trelleborg has shown Isolast® J9513 and Turcon® materials retain a significant portion of their material properties in the high temperature water glycol fluids, such as MacDermid Oceanic XT900.

The testing reveals the importance of fluid type and seal material choice in ensuring optimum seal performance and service life. Traditional sealing materials, such as FKM, often inert in most fluids, are exhibiting disadvantageous behavior in HFC fluids.

The material compatibilities mentioned here may not automatically result in success. Offshore operators are free to add extra additives to suit their particular application, and the extra additives were not included in the Trelleborg test. The extra additives may lead to seal material incompatibilities and could have dramatic adverse effects on sealing materials. Material incompatibilities may lead to an accelerated aging process in the hydraulic fluid and to increased wear and degradation of the sealing components. Each application must be reviewed uniquely to optimize the seal materials with the HFC fluid. It is important that seals are proved in specific applications with specific fluids and under actual operating conditions to ensure seal performance and life.

For more information about the test, visit: www.tss-static.com/remotemedia/media/globalformastercontent/servicetools/technical_library/whitepapers_1/whitepapers/white-paper-water-glycol-fluids.pdf