Part 7: Getting Engaged with the U.S. Council of Competitiveness

This article is seventh in a series of articles describing NFPA’s actions focused on the development of a program within the U.S. Department of Energy (DOE) that can fund and focus on energy-efficiency improvements using fluid power technology. The envisioned program would be partly research-focused, helping to develop new energy-efficient fluid power technologies, and partly education-focused, helping to improve the design and maintenance of existing fluid power systems with current technologies and techniques.

The U.S. Council of Competitiveness is a non-partisan, non-governmental organization, composed of peer corporate CEOs, university presidents, labor leaders, and national laboratory directors. It works to set an action agenda to drive U.S. competitiveness while generating innovative public policy solutions for a more prosperous America. One of its core principles identifies sustainable energy—exploiting domestic resources and using energy efficiently—as foundational to U.S. prosperity, and under that principle the Council has entered into a partnership with the U.S. DOE. The partnership is called the American Energy & Manufacturing Competitiveness Partnership (AEMC), and its focus is currently on something the DOE is calling the Clean Energy Manufacturing Initiative (CEMI). Together, the AEMC and the CEMI aim to increase U.S. manufacturing competitiveness across the board by increasing energy productivity and by investing in technologies and practices to enable U.S. manufacturers to increase their competitiveness through energy efficiency. There’s a lot of acronym soup going on here, I know, but this is where fluid power could possibly come in—as one of the technologies that will enable U.S. manufacturers to increase their competitiveness through energy efficiency. 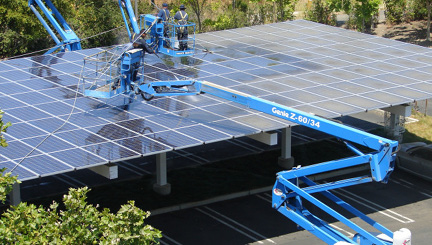 To begin exploring that possibility, NFPA and other fluid power representatives participated in a series of regional summits where the AEMC sought input on how the CEMI could best achieve its aims. At the October 2013 summit I attended in Santa Clara, Calif., the focus was on some proposed public-private partnership models that could be carried out to increase the competitive production of clean-energy, energy-efficient, and advanced manufacturing products in the United States. One of those proposed models was focused on facilitating the transition of prototypes to deployable products, and I was able to participate in the dialogue around it and propose fluid power as one of the technology zones that could be ripe for that kind of investment.

As most NFPA members know, the Center for Compact and Efficient Fluid Power (CCEFP) has been working for eight years now to explore pre-competitive research projects in fluid power and connect talented bachelor, masters, and Ph.D. students to our industry. In doing so, the seven universities that make up the CCEFP have made some pre-competitive research discoveries that could be translated into energy-efficient fluid power products for our many end-use industries, including manufacturing. However, pursuing product development work is out of scope for the CCEFP, and the discoveries, although promising, are a long way from commercial deployment. Connecting fluid power and the CCEFP to a new public-private partnership model, where government money would be used to ease the risk and burden associated with start-up or established companies pursuing the development of these new technologies could dramatically accelerate the impact fluid power could make on energy efficiency and U.S. competitiveness.

It’s an exciting idea, and one of many that was offered and discussed at these regional summits. The AEMC’s plan was to take all of the input received at the summits and use it to develop an action plan that they would present at a national summit held in Washington, DC in December 2013. I attended that event as well, and I’ll provide a description of what happened there in my next post.

The intent of this series is to keep NFPA members better informed about efforts in this regard and also to seek their help in advocating for the envisioned program. Please watch this space for more background on this issue, as well as regular updates on the NFPA’s progress. If you would like to become more involved, please contact Eric Lanke directly at (414) 778-3351 or elanke@nfpa.com. Getting industry leaders engaged in this effort will be critical to its ultimate success.