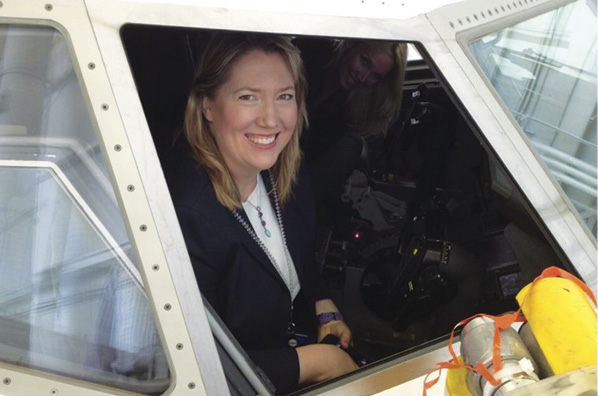 Jeanne Deaver’s life was changed her senior year of high school when a teacher offered her advice on college choices. Today, the mechanical engineer and Alaska Airlines pilot credits mentors and teachers for pushing her toward her dreams, even when things seemed bleak. Now she does the same for the next generation of aspiring STEM students. She took time to share her fascinating story with NEF.

Q: What or who inspired you to pursue an engineering degree?

Growing up, my favorite subjects were math and science. Right before I started my senior year of high school, my family moved to South Dakota. I was still undecided about what college to attend or what kind of career to pursue. Then one day after class, my math and physics teacher, Larry Hines, suggested that the local engineering university, South Dakota School of Mines and Technology (SDSM&T) might be a good fit for me. His suggestion shaped the course of my life. I attended and earned a BS in Mechanical Engineering.

Q: You’ve said flying is your dream job, but it wasn’t your first career. What did you do when you graduated from college, and how did you make the transition?

Prior to graduation, I did a college internship at The Boeing Company in Seattle. During the internship program, engineers (from both Commercial and Defense & Space) met with us to discuss career opportunities available at Boeing. During one of these sessions, I learned that some of the Boeing pilots had originally began working at the company as engineers. I was hired into the internship program by a chief engineer named Marlene Nelson. One weekend during the summer, she took me up on my first flight on a small airplane. I was hooked! Additionally, I was introduced to Boeing Test Pilot Captain Suzanna Darcy-Hennemann, who inspired and encouraged me to look into pursuing flying as a career.

My final year at SDSM&T, I took flying lessons and earned my Private Pilot’s License. After graduation, I returned to Seattle for a full-time position at Boeing. My career started where my internship left off—in Payloads Engineering. During my time at Boeing, I also worked in Flight Test Instrumentation on basic certification for 737/757 and 777 aircraft. My final rotation at Boeing was in Service Engineering, supporting narrow body customers (707/727/737/757) in Southeast Asia. I was really enjoying my engineering career, and I also really enjoyed flying as a hobby. 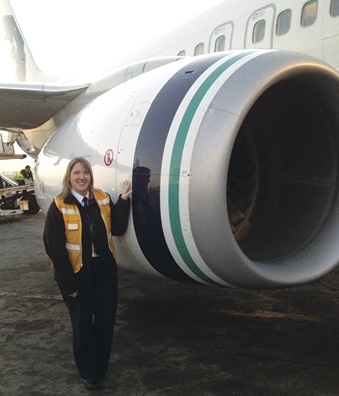 Pilots who are building their time and “paying their dues” do not make a lot of money. Leaving a promising and profitable career to take a step into the unknown was not easy. I had very little time to doubt my decision, though, because I had so much encouragement. Every time I saw Captain Suzanna or Marlene, they would ask how much flight time I had and what I planned to do next. At the age of 28, it was time to make the transition. My husband, Darren (also a Boeing engineer and incredibly supportive of my career change), was working on a project in Phoenix. I took a leave of absence from my engineering job and met him in the desert. Because of the optimal weather, I quickly finished my training and began flight instructing. When Darren’s project ended, we returned to Seattle, and I instructed at Galvin Flying Service. The tragic events of 9/11 significantly reduced the need for pilots at the airlines. I was discouraged, but fortunately, I saw Captain Suzanna at an event at the Museum of Flight. She told me to keep going because this was just a temporary setback. I took her advice, instructed a couple more years at Galvin, and became chief flight instructor. When the economy improved, I flew Embraer Brasilias and Canadair Regional Jets at SkyWest Airlines. And finally, in the summer of 2012, I started my dream job of flying Boeing 737s for the hometown favorite…Alaska Airlines.

Q: How does having an engineering degree and your previous experience at Boeing help you as a pilot?

In the modern age of flying, the systems on airplanes are very complex. Understanding how each system functions is an integral part of being a safe pilot. It is so important that airlines will allocate approximately two weeks of the curriculum to focus on aircraft systems. Many people say that learning a new airplane is like drinking from a firehose. Luckily for me, most of this information was obtained while working on the 737NGs at Boeing. I used the time in ground school to refresh, fill in the gaps, and then focus on other aspects of flying the airplane safely.

An engineering degree is also a safety net. The airline industry is cyclical, and pilots are required to pass a medical examination as often as every six months. A well-educated pilot with an engineering degree will have more options if they lose their medical or are furloughed than someone who just obtained a basic degree to meet the requirement for the job.

In my short time at Alaska Airlines, I have been surprised to learn how many of my pilot co-workers have an engineering degree. Becoming an airline pilot is a difficult process. But I believe that the difficult curriculum in an engineering program fully prepares a person for this task. Additionally, a few of my college classmates have continued their education after engineering and pursued careers in patent law, bio-engineering, and finance. I believe the engineering degree was as helpful to them in their new careers as it was for me becoming a pilot.

Q: Please tell us about the importance of mentoring in your life and why it is important for professionals in stem-related fields to reach out to the next generation.

When I was a little girl growing up in western Nebraska, there were very few women in STEM. There were even fewer flying Boeing airplanes at a major airline. I believe the reason I was successful is because of my mentors who provided the guidance and encouragement necessary to help me stay focused. Their words helped shape my inner dialog when things become difficult. I am so thankful to all of them for helping me succeed.

This generation has a lot more opportunities to pursue STEM careers. But they must be aware of their options to know that they exist. That is why it is important for all of us, as professionals, to look back and offer a hand up to the generation behind us. I give back as a mentor at Raisbeck Aviation High School, through Amelia’s Aero Club, at Seattle’s Museum of Flight, and by taking the opportunity to show my workplace to every enthusiastic child who is on my flight.

The information above was published with permission from NEF, which brings together leaders concerned about the sustainability of engineering in the United States and the impact on the nation’s security and prosperity. NEF involves industry executives, academics, policymakers, media, engineering societies, and nonprofits to develop solutions to the challenges facing the U.S. engineering enterprise. For more information, contact by phone: 202-969-3410, by email: info@nationalengineeringforum.com, or on the web: www.nationalengineeringforum.com. Follow NEF on Twitter at @NatEngForum to see new content every week.