Figure It Out: Extractor Motor Reverse Speed Rises to an Unexpected Creep 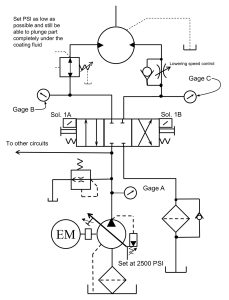 A hydraulic system drives a vertical ball screw that slowly lowers product into a vat. The company found it was important that the force of lowering the part be limited in case the new part encounters a previous part that had not moved out of the way. They installed a pressure-reducing valve to control the lowering force, and it worked well.

They experienced a leak coming from one of the swash-plate bearing covers and replaced the pump with a new one they had in stock. They primed the pump and set the pressure, ran several cycles, and turned the machine over to production.

Production called maintenance back to the machine complaining about a problem with the reversing speed of the hydraulic motor. Every two or three cycles, the motor would act like it had a flow control adjusted to low speed when the motor reversed. After inspecting for a contaminate in the lines and inspecting the pressure reducer and directional valve, they could not find the problem.

What could be the issue?

Pressure-reducing valves that pass flow in the reverse direction without a separate bypass check keep the spool in the normal open position, allowing flow in either direction. However, the signal line looks at the oil coming from the motor, and if there is a pressure spike due to higher flows, it causes the pressure reducing valve to close, creating a restriction. They found that the original pump’s volume adjustment reduced the flow about 5%. Reducing the new pump’s flow solved the spike problem.