Figure It Out: Compactor Loses Pressure to All Circuits 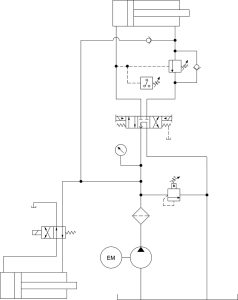 I was called in to help with a compactor that bails scrap paper leftover after trimming paper sheets for paper grocery bags. As the circuit on the right shows, the system is simple. However, the customer did not have a circuit to use for troubleshooting, and his first instinct was to replace the pump. After installing the new pump, they removed the visibly dirty pressure filter element and reinstalled the housing canister without an element, as they did not have a spare. They started up and still could not get any system pressure. Then they removed the main spool for inspection by removing an end cap on the main stage of the valve. It seemed in good condition. Next, they thought the pilot valve on the directional control valve was not shifting the main spool, so they replaced it with one they had in stock. Still no pressure.

When I arrived, I sketched out the circuit but was convinced that the pilot orifice in the pilot-operated relief was plugged. They examined the orifice, and to my surprise, it was clear of any contaminant. Both the main ram and door cylinders checked out OK.

Solution to the October 2022 problem:
Compactor Loses Pressure to All Circuits

After checking most of the normal causes for lack of pressure, I thought that the pilot orifice in the main pilot operated directional valve was plugged. When I removed the main stage of the directional valve, I found it had a check valve insert in the pressure port. This creates enough pilot pressure to shift the main spool and requires about 75 psi minimum. A piece of plastic was holding the check valve fully open. Removing the obstacle solved the lack of main system pressure. Further inspection then found that the bypass check in the pressure filter had failed and generated the plastic piece. We installed a new filter housing.