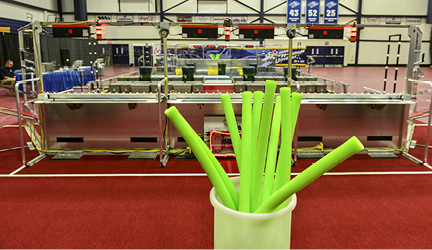 Inventor and FIRST® Founder Dean Kamen launched the 2015 FIRST® Robotics Competition (FRC) season with the kickoff of a new robotics game called RECYCLE RUSHSM before a crowd of more than 800 people at Southern New Hampshire University in Manchester, N.H., hometown of FIRST headquarters. Nearly 75,000 high school students on approximately 3,000 teams at 107 venues around the globe joined the 2015 kickoff via live Comcast NBCUniversal broadcast.

RECYCLE RUSHSM is a recycling-themed game played by two Alliances of three robots each. Robots score points by stacking totes on scoring platforms, capping those stacks with recycling containers, and properly disposing of pool noodles, representing litter. In keeping with the recycling theme of the game, all game pieces used are reusable or recyclable by teams in their home locations or by FIRST at the end of the season.

At the kickoff event, FIRST Robotics Competition teams were shown the playing field and received a kit of parts made up of motors, batteries, a control system, a PC, and a mix of automation components worth tens of thousands of dollars—and only limited instruction. Working with adult mentors, students have six weeks to design, build, program, and test their robots to meet the season’s engineering challenge. Once these young inventors build a robot, their teams will participate in one or more of the 105 regional and district events that measure the effectiveness of each robot, the power of collaboration, and the determination of students.

NASA Administrator Charles Boden said, “I get excited about the start of another FIRST competition season, and I get inspired watching you work as teams building and operating robots that perform incredible feats. Before we send humans to Mars and beyond, robots will lead the way. Your work will be a vital contribution to space exploration.”

Sponsored by NASA, Comcast NBCUniversal, and Massachusetts-based PTC, the 2015 FIRST Robotics Competition Kickoff event is an opportunity for teams from all over the world to come together as a community to share in the excitement of seeing the new game unveiled. Teams at local kickoffs in Australia, Brazil, Canada, Israel, Mexico, and the U.S. watched the proceedings via live broadcast.

To find FIRST Robotics Competition events and/or teams in your area, visit www.usfirst.org/whats-going-on.