Have you ever had a conversation about pressure in a fluid power system only to realize that the person with whom you are engaged has a completely different understanding on what pressure you were discussing? Not surprising, since there are 17 different pressure levels in a system as shown in Fig. 1.

Fig. 1 is taken from ISO 5598:2008 and represents the consensus reached by fluid power experts from several countries. They struggled to find a way to show, in a picture, the several pressures that exist in a system. 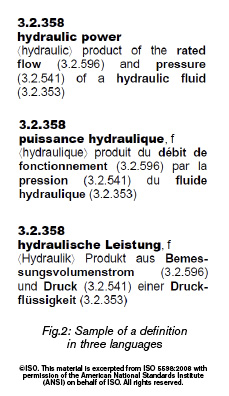 ISO 5598 not only describes pressures, but it has 781 definitions for many of the terms used in fluid power systems – in three languages (English, French, and German; see Fig. 2). This massive number did not come about all at one time. Earlier documents in the U.S. included ANSI/B93.2 published in the 1970s and updated in the 1980s, just as the first edition of ISO 5598 was published in 1985. These documents included many of the initial definitions that were eventually included in the present edition of ISO 5598. But, there are additional definitions in individual standards that are specific to the science of that standard (e.g. sonic conductance of a pneumatic valve in ISO 6358-1:2013). Also, the ISO 8625 series is another group of standards for terms in aerospace fluid systems.

Defining terms for the fluid power industry is not easy. It requires considerable discussion among the experts before adoption because interpretation into other languages must maintain the intended meaning. Even the intended meaning has to be first agreed upon, and that is often a matter of diverse opinions. During the development of the 2008 edition, over 500 comments from the experts had to be reviewed at one meeting (over several days). Given the ISO regulations for development of standards, with several levels of voting, there were many meetings to resolve comments on ballots at each level.

Sometimes the definition of a term can be amplified with a supplementary sketch, as shown in Fig. 3.

Two other features are pointed out in Fig. 3:

ISO 5598 is a very important standard because it defines the terms used in the fluid power industry. We depend on these definitions in order to understand one another, especially across global languages. This ISO standard provides definitions for sales orders, instruction manuals, legal documents, and everyday conversations.