A hydraulic distributor hired a sales engineer for a new territory they were moving into. The first customer the engineer visited requested a quote on a hydraulic system. The customer provided the following requirements to press two large forgings together:

The sales engineer designed the circuit and quoted the customer a price to deliver all of the components. The customer installed the parts using the circuit supplied. The sales engineer then got a call from the customer stating that the gear pump was overheating. It also seemed as if the load sense worked when retracting, but when extending at no load, was always at 2450-psi system pressure. The return line screw-on filter element was coming loose, and the customer had to keep tightening it. 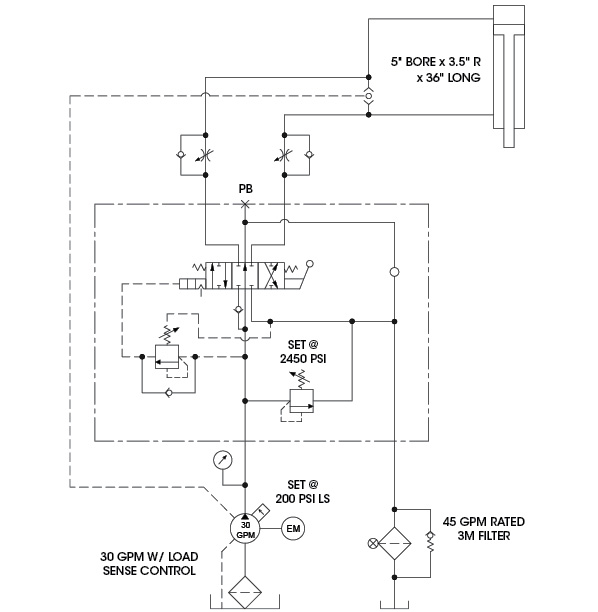 Any idea what’s causing the problems?

When using load-sense circuits, it’s important to locate the sensing line where it will always sense the load pressure required to move the cylinder. The shuttle valve location on the circuit should have been between the DCV and the flow controls. When the cylinder is extending, the rod pressure can be twice the cap pressure due to the meter-out flow control causing the load sense to go above the main relief setting. Also, the filter was undersized, since a 2-to-1 ratio cylinder will return twice the pump flow at full speed when retracting, causing the element’s thread stud to stretch and eventually blow off.