History of the ISO 3601 Series of Standards for O-Rings

In 1939, Niels A. Christensen was granted a U.S. Patent for “new and useful improvements in packings and the like for power cylinders,” which were improved packing rings made of “solid rubber or rubber composition very dense and yet possessive of great liveliness and compressibility” suitable for use as packings for fluid medium pistons (liquid or air). The improved packing ring is the modern O-ring. The principle behind the successful sealing of fluid with an O-ring is that it deforms when compressed in its groove and “it has slight freedom of movement to be worked or kneaded during the piston reciprocation in order to maintain the rubber in a live state” and acts as a barrier, resisting leakage.

Christensen did not provide equations to determine the size needed for the circular cross section or the ID of the “improved packing” or for the groove. He found that the compression should not be too high as to prohibit the packing from moving, that it needed to have “slight freedom of movement to be worked or kneaded during the piston reciprocation in order to maintain the rubber in a live state and to prolong its serviceable life” but not so little compression or too wide of a groove that would allow it too much freedom of movement and “permit complete turning of the ring out upon its axis as would be caused by a wider groove permitting the ring to twist through 360 degrees.”

In his patent application, Christensen mentions finding that a cross section diameter of 3/16 inches worked well when compressed about 1/16 inch when installed in a “groove having a flat bottom portion spaced from the cylinder wall a distance less than the normal radial dimension of the ring.”

Proper compression (squeeze) was key in the O-ring’s performance and life per Christensen; however, with no clear or exact guidelines on seal fit given by Christensen, different philosophies of seal fit and hence O-ring and gland design emerged. This created the problem that there were no universal standards for O-ring sizes or housings (glands). If one purchased an O-ring from Sweden, it might not work in equipment designed in France or even in similar equipment designed in Sweden. Because of this, it became obvious that O-ring and hardware size standards were needed. This need was satisfied nationally by creating standards for O-rings used in equipment manufactured in that specific country. Standards such as AS568, BS 1806, DIN 3771, JIS B2401, NF T47-501, and SMS 1586 were developed by national standards organizations to satisfy the needs of their national industries. In the 1970s, as companies became more international, it became obvious that an international O-ring standard was required.

In 1978, ISO 3601-1 was first released. This original release of ISO 3601-1 included sizes of O-rings for General Purpose applications. It was essentially DIN 3771 converted to an ISO Standard. This did give sizes for O-rings, but no hardware dimensions to use with these seal sizes. Also by this time, AS568 O-ring sizes were being used all over the world. Of all the O-ring size specifications, AS568 was (and is) the most widely used one internationally—not DIN 3771. 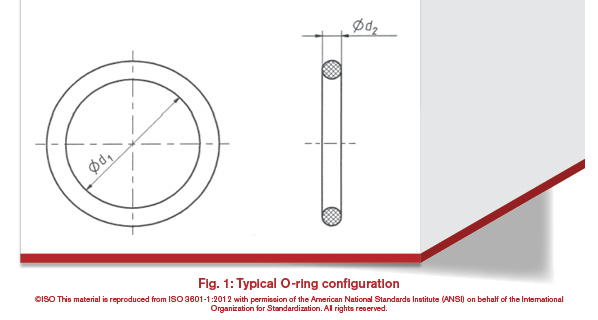 Ten years later, in 1988, the first revision of ISO 3601-1 was released. This included some new sizes for aerospace metric O-rings. This was followed by another revision in 2002 with only a few changes, most of which were corrections on sizes. The major issue with these standards was that they still did not address those sizes listed in AS568 that were internationally used. It was not until the revision released in 2008 that the AS568 sizes, converted to metric, finally made it into this specification, replacing the former, general-purpose-use, metric sizes from the old DIN standard.

2008 was a significant year for the ISO 3601 series. This was not only the year that the most internationally used O-ring sizes made it in to Part 1 (ISO 3601-1), but it also was the first time hardware dimensions and O-ring fit guidelines for general purpose fluid power applications were standardized and published in an international specification: ISO 3601-2.

ISO 3601-2 specifies the hardware dimensions for the O-rings identified in ISO 3601-1, with the exception of the special sizes used only in aerospace. It also includes O-ring fit guidelines for squeeze (compression) and stretch, along with equations to determine O-ring fit and help with determining the best size O-ring—even a custom size—for a given application and/or set of hardware. The hardware and gland dimensions are based upon requirements that are universally accepted for optimum sealing conditions.

These requirements differ for piston and rod applications, as well as for face seal applications. The differences have to do with seal squeeze, seal stretch, and occupancy of the gland. There are charts included in the document that provide the acceptable squeeze range for different cross-section O-rings in different applications. Seal stretch was overlooked by Christensen and earlier users of O-rings, but has been found to be a significant factor in seal life and performance for dynamic applications. Hardware dimensions in ISO 3601-2 were developed in consideration of optimal stretch, squeeze, and gland occupancy to provide good seal performance and longevity.

In 1987, ISO 3601-3, the specification covering quality requirements (surface defects) of O-rings, was first released. This has been revised several times, mainly to reflect the range of sizes in ISO 3601-1 and clarify requirements. ISO 3601-3 defines and classifies surface imperfections on O-rings and specifies maximum acceptable limits for these imperfections. Originally, this standard was developed for general-purpose O-rings, but has been revised and refined over the years to include three classes (N, S, CS) of defects depending upon application. Class N is the standard of acceptance for general-purpose O-rings. Class S addresses the quality requirements for optimum performance industrial applications and aerospace applications. Class CS is for special and critical sealing applications, such as very special aerospace applications and critical oxygen service applications. Because the standard is so comprehensive, it has readily been accepted by all industries, including aerospace where it has been written into specialty O-ring standards.

Finally, what would an O-ring standard be without addressing the composition of the O-ring? Each application, each fluid, and each environmental exposure requires unique polymer materials compounded into formulations to provide optimum performance and resistance to chemical attack. Enter ISO 3601-5, which was initially released in 2002 and has been revised since then to provide the material requirements for O-rings used in general-purpose applications. It lists the basic material properties required for O-ring materials for many general-purpose applications. It is limited to general purpose, however, because specialized applications require specialty materials and/or different requirements for compatibility and performance. 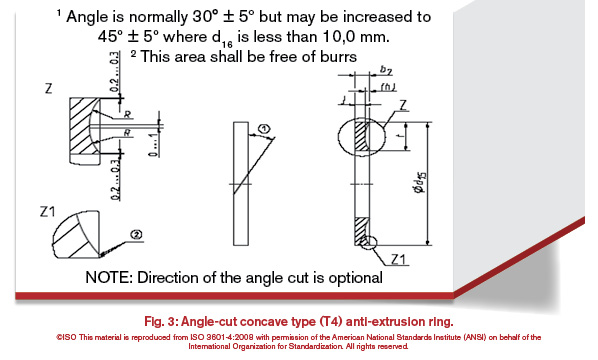