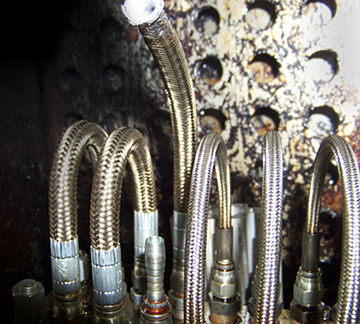 Predicting the life of a hose and determining the source of a failure can be difficult. Understanding how or when a failure occurs is time, temperature, and stress dependent. Service conditions and fault situations often vary from product to product, and without testing, failure modes are most often unknown before initial use under normal operating conditions. For complex applications, it’s impossible to fully replicate service conditions in an accelerated test. Failure mechanisms are not always progressive, but a stepwise change in properties can occur.

Hose failure can be caused by several common conditions. Flexing, twisting, or pulling a hose to a degree that is smaller than the specified bend radius are typical failure modes. If an insufficient amount of pressure is applied during the crimping process, it can cause the hose to break loose from the crimp, while too much pressure can cause internal tears in the hose. Improper assembly, such as incompatible hoses and connectors or a lack of fittings and clamps, can lead to leaks and losses. Additionally, abrasion or hoses that rub against other surfaces can cause changes in the surrounding operating system, resulting in incompatibility with existing designs.

Throughout the product development lifecycle, there are key opportunities to assess how a product will perform in its final application. Material testing allows you to understand how polymers behave in specific applications and measures the effect of different environmental factors under isolated conditions. Data can be carried over to new applications and can aid in the initial selection of candidate materials. Product testing more effectively replicates the service conditions and only relates to the specific product being tested. Common industry standard test methods include FMVSS 106, SAE J1610, SAE J2260, SAE J2044/J2045, GMW 16153, and GMW 14785 for automotive, and SAE J343, SAE J517 for industrial. In addition, both material and product testing can bring to light compatibility issues that may exist in the various reinforcing materials and components that can go into a hose. 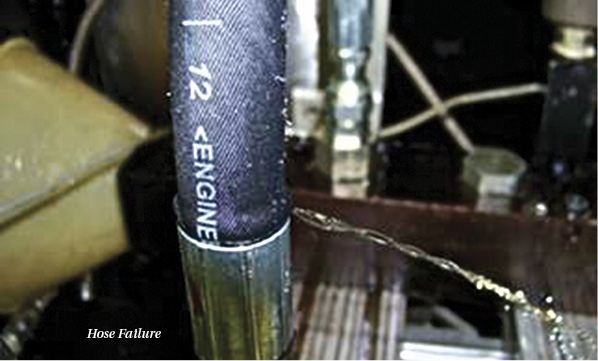 Before beginning the test process, determine the property that should be measured, the critical function for the application, and the key attributes that must be replicated to achieve true, comparable results. Ask: what is the end of life or threshold criterion? A 50% loss in property is commonly used, but an absolute value may be more appropriate. Consider the thickness of the test sample, as it influences the rate of diffusion of a gas or liquid into the material. Thinner parts are more susceptible to short-term degradation, while the bulk properties of very large components may remain almost unaffected. Developing a test to evaluate a product after a specified period of time is easier than testing to failure, so also consider the duration, working temperature, fluid exposure, mounting, and any other moving parts.

The Value of External Testing

Smithers Rapra has created a tool for businesses to compare the value of internal testing versus external testing according to their individually unique circumstances. It provides an accurate prediction of potential revenue gains and losses based on the estimated retail market price of the final product, the forecasted monthly volume sold, the projected delays for internal testing, the adjusted delay for external testing, and the cost for external testing. To learn more about comparing testing costs, visit www.smithersrapra.com/costcalculator. 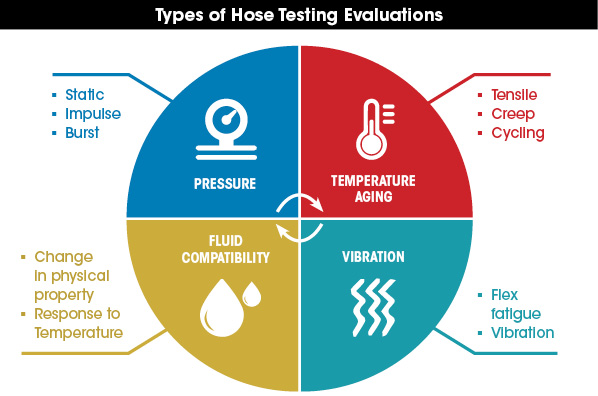 Every hose has a Maximum Allowable Working Pressure (MAWP). There are three common pressure tests used to verify the hose and house assembly’s pressure range:

Under accelerated aging evaluations, temperature is used to accelerate a test, producing greater energy for reactions to occur in a shorter timeframe. High temperatures can cause varying reactions, though, so material must not undergo any transitions over an accelerated temperature range. Remain below the recommended upper operating temperature for optimal results.

When testing tensile strength, failure always occurs in the center, so it’s easy to measure the failure point in the product. Polymer behavior informs how the tensile strength, hardness, and elongation change; ductile-to-brittle behavior can be seen over sudden transitions.

Temperature cycling is used to evaluate the behavior of the product when exposed to varying temperature extremes. An environmental chamber capable of cycling temperature is used during this test.

Fluid compatibility testing is usually conducted on the finished material. Studies need to be performed to confirm that the hose’s composition can withstand prolonged exposure with the fluid; typical testing protocol for fluid compatibility is ASTM D471. Evaluate material compatibility with fluids by measuring the change in physical properties, such as tensile strength, elongation, hardness, and volume swell, or its reaction to the elevated temperature of fluids, such as fuels, oils, coolants, brake fluid, and cleaning agents.

About the author: Jeff Andrasik is the product-testing manager for Smithers Rapra North America.