How the forming of an in-house Study Group led to a significant rise in certifications. 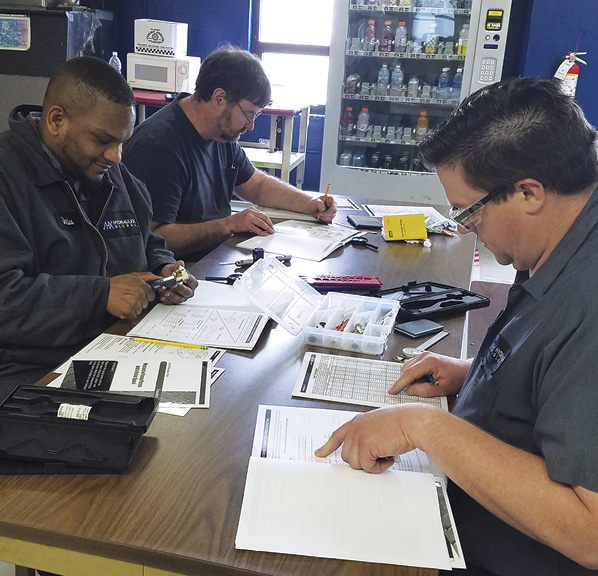 The Hydraulex Study Group meets at the plant after work hours.

Ten years ago, the Hydraulex plant in Detroit, Michigan had a total of three International Fluid Power Society (IFPS) certifications earned by employees across their shop floor. Today, through the actions of an in-house, employee-led Study Group movement, that number is now 22 and growing.

This remarkable rise in Hydraulex employee IFPS certifications began three years ago when a 30-year Hydraulex veteran, Steve Downey, was looking for his own path of self-improvement. He toyed with the notion of taking a few college-level classes after work so he could ultimately teach, however in the end he decided to focus on earning more IFPS certifications. Downey asked others around the plant if they were interested too, and it was from this initial search for educational opportunities that Downey came up with the idea for an in-house Study Group.

“I wanted to avoid study procrastination,” said Downey. “I believed there would be strength-in-numbers if I could convince some of my colleagues to go for their certifications as well. I started recruiting friends around the plant to see if they were interested in forming a small after-hours study group to prepare for the certification test.”

When the company got wind of Downey’s idea, they were eager to help and asked if he would open up the Study Group to the entire plant. In turn, they offered assistance in the form of providing the meeting space and study guide materials needed to prepare. Up until this time, Hydraulex had only reimbursed employees for the cost of the test after completion; the study location, training materials and travel to training and test sites, all rested on the employee’s shoulders.

When the first Study Group was formed, over 30 employees signed up. The group met once a week, after work at the plant, to work together through the IFPS study guide. After three months, they took the written test. The group didn’t do as well as they had hoped when they took the first test, however they did have some success, and more importantly, they had the enthusiasm and commitment from Hydraulex to help them achieve success in the future. Now after three years of in-house Study Groups, and with the support of the company and IFPS, the pass rate on the last written test was 100% for the eight employees who took the exam. 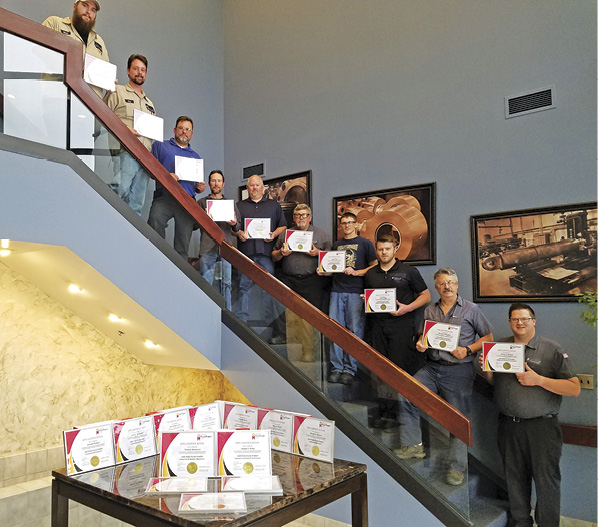 Employees who earned certifications by participating in the Study Group

This remarkable journey over the past three years has seen the Study Group evolve in several ways. The location for the written and hands-on portions of the tests is more assessable for employees as the company now arranges for the IFPS-supplied proctors to administer the written test on the plant site. The company also pays for the test before the employee takes it and Downey has become IFPS-certified to administer the hands-on portion of the test at the plant. This added accessibility and company support gives employees more time to focus on the test portion with less travel and up-front, out-of-pocket expenses.

IFPS took notice of the Study Group and became involved in helping them. Dan Helgerson (Technical Editor for the Fluid Power Journal), Robert Sheaf (CFC Industrial Training), Ken Dulinski (Fluid Power Instructor Macomb Community College) and Thomas Blansett (IFPS Technical Director) have supported the Study Group with answers to questions from the study guides, testing and grading support, as well as guidance for using the study manuals and access to other study materials. Making themselves accessible to the Study Groups has made a big difference in helping to keep the study momentum going.

As a result, Hydraulex is beaming with pride. According to Plant Manager Derek Weyand, “I was blown away at the amount of participation. Even though the company knocked down barriers to achieving the certifications, it still took a great deal of a person’s personal time and we are very proud of the team and honored to have played a role in their success.”

Weyand continued, “Our people are making personal accommodations to do this because they can see the success it is bringing. When the person right next to someone achieves their certifications, it shows others that they can do it too.”

Both Weyand and Downey credit three important factors to this success. First, the overall support and participation of the employees in the Study Group is a fundamental factor. They give big credit to mentorship within the ranks. While Downey initially coordinated getting the group started, he now takes on the role of mentor during the study sessions to steer the group. He concedes he doesn’t have all the answers and has learned from other participants during the sessions. Each employee has a different knowledge set, and they draw on each other to learn and take turns leading the discussion topics.

The second factor for success is company participation. Having Hydraulex commit to employees seeking certifications on the front end has made a significant difference. From paying for study materials and the test to coordinating with IFPS for the exam to be conducted at the plant, the company has eased both the financial burden and the amount of personal time required from employees.

Lastly, Hydraulex employees understand the importance of obtaining the IFPS certifications. Employees can see first-hand that their co-workers who have acquired the certifications receive opportunity for advancement within the company. They also know that an IFPS certification is portable; it is an achievement that travels with a person regardless of what company they work for.

Of course, Derek Weyand hopes the employees stay at Hydraulex. “Our company relies heavily on the knowledge of our hydraulic technicians and specialists. Our people are building and repairing complex hydraulic equipment, and they are our number one asset. They are achieving these credentials in the same manner as they repair equipment for customers, with skill, attention to detail, and determination. As a company, we are doing our best to knock down barriers for employees to obtain their certifications.”

Weyand continued, “This is a big win for both the company and the employees. We are a growing company and it is easier for a company to grow when employees develop as ours have and can easily transition into positions that didn’t exist six months ago.”

About Hydraulex: Hydraulex repairs and provides remanufactured, aftermarket, and OEM hydraulic units and components. Hydraulex is a family of brands including Attica Hydraulic Exchange, Flint Hydrostatics, Hydraulic Repair and Design, and Metaris Hydraulics.