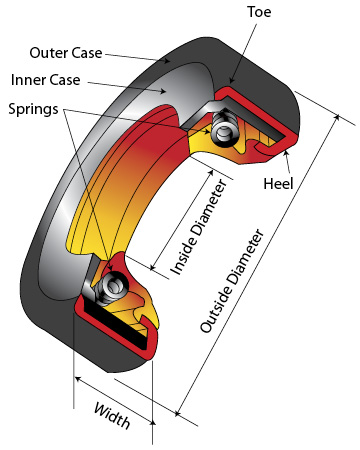 In a perfect world, our bodies would be able to rehydrate with either fresh or salt water, our skin would not be affected by UV rays, and “Mexican Monday” would not always result in “Terrible Tuesday.” Unfortunately, this is not an ideal world, and our bodies are not compatible with everything that surrounds us. Just as too many enchiladas can cause a violent reaction in our digestive tract, the improper hydraulic fluid can spell disaster for your entire hydraulic assembly, and correcting this issue will require much more work than taking a couple anti-acid tablets and drinking Ginger Ale. When designing and/or servicing your hydraulic equipment, it is vital that you keep “compatibility” in the forefront of your mind.

Approximately 200 million gallons of hydraulic oils are used in the U.S. annually; roughly 165 million gallons of that volume are mineral-based fluids. These standard mineral-based oils operate between the temperatures of -40°C to 150°C with a few exceptions. In addition to the mineral-based fluids, there are also specialty fire-resistant hydraulic fluids as well as environmentally friendly, biodegradable fluids. The International Organization for Standardization (ISO) currently recognizes four major groups of fire-resistant hydraulic fluids. These four groups include high-water containing fluids (HFA), invert emulsions (HFB), water glycols (HFC), and water-free fluids including synthetics (HFD).

HFA fluids share almost identical chemical characteristics of plain water, and while these fluids are extremely fire resistant, they require equipment that has been designed for use with water. The most common uses for these HFA fluids are in steel mills and coal mines where they are often subjected to open flame.  HFB fluids are emulsions of water in oil with 60% oil content. These HFB fluids can perform almost as well as petroleum oil in some cases.  The water glycols (HFC) are the most popular fire-resistant hydraulic fluid. They are comprised of 35-45% water and include special viscosity-boosting thickeners. These fluids can operate most equipment that has been designed for oil, however the speeds, temperatures, and pressures of the system may need to be adjusted in order to adhere to the HFC’s temperatures range of -30° to 60°C. The final type of fire resistant fluid, HFD, is considered synthetic because it does not contain either petroleum oil or water. Polyesters are the most widely used HFD fluids and are based on organic esters. Beyond being fire resistant, these high-performing fluids are also biodegradable and display very low levels of aquatic toxicity. The major drawback is that these fluids can be more than twice as expensive as petroleum oil.

With a constant emphasis on being “green conscious,” biodegradable environmental fluids have been developed. In order to be considered an “Environmentally Acceptable Fluid,” 60% of the fluid must decompose within 28 days of exposure as well as being non-toxic (must pass aquatic toxicity tests on specific species of fish). Vegetable oil, more particularly grapeseed oil, is the most common base for these environmental fluids. The lubrication and anti-wear properties of these fluids are extremely similar to those of petroleum oil (the single most commonly used hydraulic oil). The drawbacks from using these fluids is that they are very susceptible to oxidation and also perform very poorly in cold weather, where it is not uncommon for the fluid to congeal and prevent your equipment from “cold-starting.” Vegetable oil suppliers have begun using genetic engineering to boost fluid stability, and the market is experiencing constant improvements in the area of these biodegradable hydraulic fluids.

If the decision is made to change the hydraulic fluid in your assembly, bear in mind the notion of “compatibility” and how this change will directly affect various internal components of the system. For the purposes of our discussion, the focus is on the selection of the proper seal lip material that will be compatible with the application media. These materials range from standard Nitrile Buna Rubber (NBR), Viton® (FKM), and Ethylene Propylene Diene Monomer Rubber (EPDM) to Polytetrafluoroethylene (PTFE otherwise known as Teflon®). Fortunately, matching the proper fluid and material is not as difficult as pronouncing the full name of the material when you understand the relationship between the two.

Viscosity and temperature are the two most vital factors to consider in regards to your hydraulic oil. Regardless of how high of a quality the hydraulic fluid may be, if the viscosity grade is not correctly matched with the operating temperature of the hydraulic system, then there is the possibility of premature internal component failure. For example, if the operating temperature of your system is below the recommended level for your viscosity grade, it is possible that your fluid will begin to congeal. This solidifying of your oil will not allow it to flow freely within the system resulting in possible component seizures. Another adverse effect of this solidifying is that the media will lose the ability to continue lubricating your hydraulic piston, increasing the coefficient of friction (Mu) experienced by the seal lip. If this continues, the increased heat and wear will cause the seal lip to rapidly deteriorate, possibly resulting in complete system failure.

Recently, one of our customers was wondering why the hydraulic seals in his system had suddenly started to fail prior to the expected “seal life” and if we had mistakenly sent him the wrong seal or the incorrect seal lip material. Upon further investigation, it was discovered that the customer had recently changed to a fire-resistant hydraulic fluid in order to ensure a safer working environment without considering the impact that this change would have on other component parts of the system, including the seal. As a result, the EPDM seal lip was not compatible with the new fire-resistant hydraulic fluid and had started to absorb the fluid at an accelerated rate, causing the lip to “swell.” This swelling caused increased wear on the seal, resulting in decreased seal life and subsequent unacceptable leakage.

Unfortunately, there is not an online matchmaking service yet established where one can enter a specific fluid and in return receive five compatible material matches based on the fluid’s “personality.” However, the use of compatibility charts will assist the design engineer with the proper selection of hydraulic fluid media that will function effectively with component parts, including seal lip material. For an electronic copy of a comprehensive hydraulic fluid compatibility chart, please refer to the Colonial Seal Web site. To make a decision in regards to your hydraulic system without first understanding the full impact it will have on each part of the assembly is similar to ordering the Fiesta Feast at 9:00 on Monday night. Initially everything seems to be moving along, but after some time passes, you may discover that your brash decision wound up having serious internal compatibility issues resulting in an overall breakdown in the system.