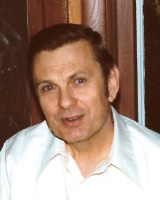 After a long battle with Alzheimer’s, Russell “Russ” Henke died at the age of 91 on November 2, 2015. Russ is described by his wife of 68 years, Constance, as a man who loved life with a devotion to the fluid power industry. He graduated from Wauwatosa High School in 1942. He joined the U.S. Navy at age 19, and trained for flight school, where he traveled to various states, and served in the Pacific on an aircraft carrier during World War II. After the war, Russ graduated from UW-Madison with a degree in Mechanical Engineering.

Within Russ’s professional legacy were active roles in education, as well as in numerous committees and professional associations. Russ was the founding director of the Fluid Power Institute at Milwaukee School of Engineering (MSOE), a role that carried with it the rank of Professor of Mechanical Engineering. He served on many committees and on the Board of Directors for the International Fluid Power Society, serving as president from 1966-67. After gaining an impressive amount of engineering and manufacturing experience working for companies including Racine Hydraulics Co., American Marietta Corp., Badger Meter Mfg. Co., and The Heil Co., Russ focused his skills and time at his own consulting firm, Russ Henke Associates. His business consisted of consulting, conducting educational seminars, and serving as an expert witness.

Russ loved to write about fluid power, particularly hydraulics. He authored over 100 published articles, papers, etc., on a range of technical, marketing, and management topics. He also wrote six technical books. Russ was the recipient of many fluid power awards, including the Pascal Medal from the International Fluid Power Society in 1970.

Russ enjoyed many hobbies in his life, including photography, gardening, and travel. He enjoyed taking pictures of lighthouses around the world. Russ is survived by his wife, Constance, and his children, Christopher and Pamela. His life was celebrated in a private ceremony.