Formal standardization of hydraulic and pneumatic systems best practices began in the early 1950s through the efforts of the Joint Industrial Council (JIC) made up of automotive manufacturing experts (Fig. 1). ISO TC131/SC9 addressed this subject in the 1970s, resulting in the release of ISO 4413 and 4414 standards for stationary hydraulic and pneumatic equipment. The JIC was dissolved as an organization in 1981. It reached an agreement with the National Fluid Power Association (NFPA) to have the JIC fluid power standards updated and issued as ANSI/NFPA standards.

The NFPA Systems Technical Committee released national standards around 1990 to comply with the JIC agreement, with much of that work later incorporated into updates of the ISO standards in 1998. To that point, the scope of the hydraulic standard was restricted to guidelines for stationary equipment. In 2010, the ISO standards were significantly updated to their current level.

In between this activity, the European Committee for Standardization (CEN) issued EN 982 and EN 983 in 1995 for hydraulic and pneumatic systems standards to satisfy the requirements of the EU Machinery Directive. CEN used those first ISO standards as models, but incorporated provisions specifically needed by the directives. These standards were eventually withdrawn when ISO 4413 and 4414 were updated in 2010 to include many of the safety-related provisions in the EN standards.

This standards progression for hydraulics is depicted in Fig. 2. Pneumatics followed a similar path, culminating in the 2010 revision of ISO 4414. 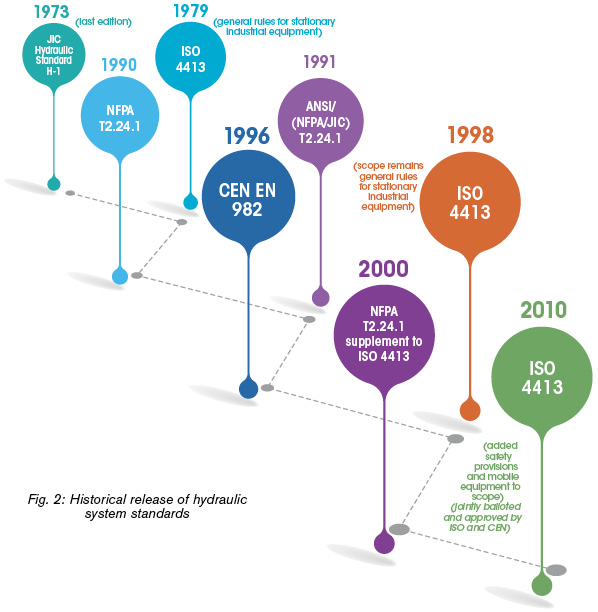 The current revisions of ISO 4413 and 4414 incorporate many significant additions. Four primary goals were established and achieved by ISO TC131/SC9 for this revision effort:

Since the ISO hydraulic and pneumatic systems standards now contain safety provisions from the CEN standards and allow compliance with the Machinery Directive, it is important to understand how they fit in the overall hierarchy of machinery safety standards. ISO machinery safety standards are grouped into the three general types listed in Fig 3. Provisions of a Type C standard take precedence over those of a Type B standard such as ISO 4413 or 4414 when there are conflicts or differences.

One of the first steps in a fluid power system safety evaluation is completion of a risk assessment, per ISO 14121-1 or other approved process. ISO 4413 and 4414 help facilitate this process by providing a list of hazards, as well as many other suggestions and rules. The risk-elimination hierarchy prescribed in ISO 12100-1 must be followed, considering all intended modes of system operation and anticipating any foreseeable misuse. Conformance with ISO 13849-1 satisfies the risk assessment, but is not mandatory; other means to comply with ISO 14121-1 are possible. (ISO 13849-1 is utilized to design safety related control systems – see Fig. 4.)

In addition to their focus on safety, ISO 4413 and 4414 contain component and system guidance for improved system efficiency. While the standards do not deal with efficiency determination directly, they contain provisions to facilitate an understanding and communication of the environment, and the system and component requirements.  The viewpoints of both the purchaser and the supplier are considered, and 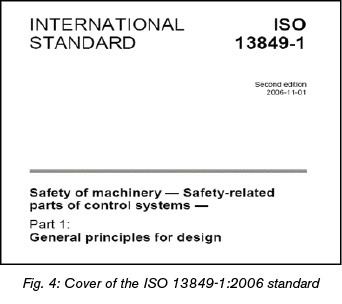 agreement between those parties is stressed. The complete system life cycle is covered from design, assembly, and installation to maintenance and disposal.

Hydraulic and pneumatic systems serve a multitude of different applications that vary widely in function, complexity, and criticality. However, ISO 4413 and 4414 promote component standardization and are extremely useful tools to aid in optimizing any system for safety and efficiency.

One thought on “ISO Standards for Hydraulic Systems and Pneumatic Systems”