In the fast-paced automobile industry, a stoppage on the production line can make any CFO sweat over the cost. The same holds true for the part manufacturers, who could lose thousands for every hour an asset is down.

For Southern Fluidpower (SFP) of Nashville, Tenn., keeping its customers operational is key to its business. The company offers fluid power and motion control sales, design, and services, such as hose assembly kitting, and hydraulic power unit builds and training. Recently, SFP was tasked with plumbing a new 400-ton standing press and getting it ready for the shop floor for one of its customers.

SFP’s customer manufactures transmission parts for the auto industry at its plant in Antioch, Tenn. SFP’s job was to outfit and replace the new press’ hose assemblies, which include about 70 individual hoses altogether, all of varying size, length, and pressure.

Those differences make plumbing and replacing the hoses a challenge. SFP produces up to 400 hose assemblies daily, so the processes of identifying the hoses and assembling the kits to spec must be efficient.

While SFP receives guidance from the press manufacturer on the hydraulic hoses used, workers must still go to the customer’s plant to inspect the press, says SFP’s vice president of operations, Nick Beason. A complete rework of a press could mean a few days of downtime for a customer, he says.

“We basically have to remove every single hose, put each into a container, and drive them to our corporate office in Chattanooga,” Beason says. “There, our technicians measure each hose, identify each end attachment, and figure out which hoses and fittings to replace them with. That could take two to three days alone, if not more.”

SFP technicians go through their catalogs to determine which replacement hoses and parts will be compatible with the asset, which takes additional time, he says. Without any asset-specific information for the hose assembly, installation can sometimes be a trial-and-error process, increasing the plumbing time by days.

A lack of asset-specific information also makes preventive maintenance difficult, Beason says. In the event of a hose failure, SFP would have to inspect the entire hose assembly on-site to identify the needed hoses. Having that information immediately available helps maintenance technicians better plan a replacement strategy to avoid equipment failure, and it ensures their safety during inspection and operation.

To minimize downtime and keep its customer’s costs down, SFP recommended outfitting the new 400-ton press with PTS – an asset-tracking solution developed by Parker Hannifin, a leading developer and manufacturer of motion and control technologies and systems.

PTS generates scannable tags that provide all vital information for each hose. Technicians were able to safely scan the tags with their mobile device to order the replacement hose or assembly without requiring SFP technicians on-site. The system got SFP the information they needed to immediately start building the hose assembly for the new press, says account manager, Tyler Cordell. SFP had the assembly built and shipped in three days.

“[Our customer was] thrilled with that, because that’s a press where the hoses can be difficult to get to; you can’t get to hardly any of them safely with the press running,” Cordell says. “Now that they know they can scan it and get the hose assembly back to the plant and ready to install has helped them tremendously.”

PTS also benefits SFP by helping workers build an informational database for each asset, says its president, Donny Davidson. Calling up the specs for each hose assembly on the computer eliminates the need to physically inspect the asset, reducing the identification process to hours instead of days, he says.

“Normally, we would have to go out and visually inspect the hose assembly and identify on-site what hoses are needed, but PTS helps eliminate that,” Davidson says. “Now, when the hose bursts or breaks, they can call us with the PTS ID number, or scan it with their smartphone. That’s very valuable to the customer, because it’s saving them downtime and lowers the chances of inaccuracy or incorrect parts.” 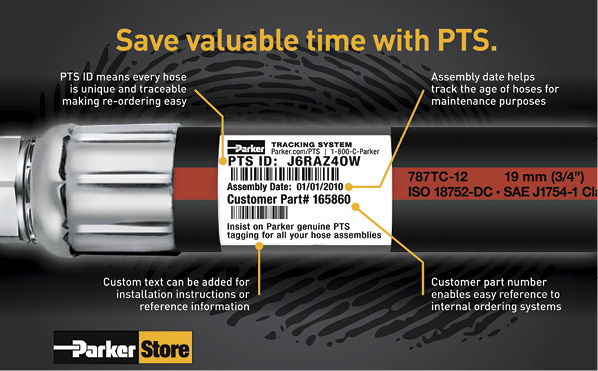 “When you have a customer that’s building trucks and construction equipment, sending them a hose kit that has 30 hoses in it with a PTS tag for each hose expedites the plumbing process tremendously,” he says. “Mechanics and laborers can now pull that hose assembly out of the kit and there’s no more trial and error. What used to take four days to plumb a vehicle now takes about four hours.”

SFP also uses PTS to help improve the aesthetics and efficiency of some hose assemblies. Having the spec data for each hydraulic hose and fitting in the assembly allows the company to cross-reference existing components for more efficient options that work seamlessly with the assembly.

“One of our customers that puts out 15 excavators a month can leave one with us for a few days and let our people go through it,” he says. “We change the hose assembly, take out some fittings to reduce leak points, and add or shorten the hoses for better routing. When we’re done, we have a better-looking and more efficient system. And all of those new components are tagged with PTS, so we can replicate the assembly quickly for our customer.”

To meet demand for this service, SFP expanded its Chattanooga plant to include a 4,000-square-foot area dedicated to reworking customer equipment, Beason adds. The expansion features two drive-in bays for customer equipment.

“We have a waiting list of customers who are eager to take advantage of this service,” Beason says. “They’re excited and have been waiting for us to complete this expansion.”