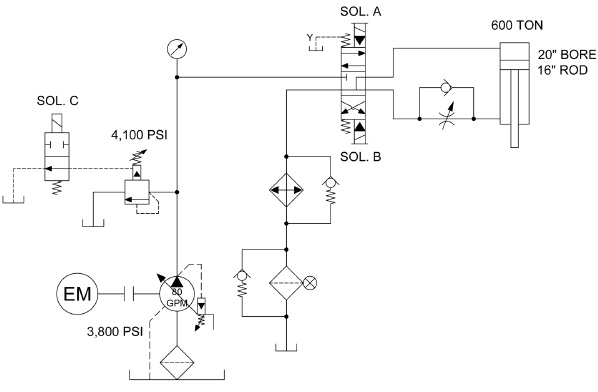 An OEM had a hydraulic distributor design an HPU for a punch press he wanted modified to punch large stainless-steel discs that were then sent to a forming press. The final product was the end caps for cylindrical air compressor tanks.

After the used press was mechanically upgraded they installed the new hydraulic power unit, and during commissioning, they experienced a problem with the ram stuttering on the downward extension, but working just fine on retraction. They could get the desired tonnage at the bottom of the stroke. They also told me the reason for the meter-in flow control on the rod was to slow the cylinders retraction rate due to the high flow going back to tank and that there was dwell time moving the plate stock into its next position.

Another problem was the spool center position needed to be changed so the press could be stopped without the ram wanting to fall to the lower extended position.

The stutter problem with the 600-ton cylinder on extension was caused by loss of pilot pressure needed to keep the pilot-operated directional valve shifted. The ram would fall fast enough to almost “run-a-way from the pump” supply flow. The spool would unshift allowing pressure to build up, then the spool would fully shift starting the spool cycle to repeat. They added a counterbalance valve on the rod side with an external pilot and 4:1 pilot ratio and it solved the stutter problem. They also changed the directional valve spool to a blocked “P” and “B” with “A” port connected to the tank to hold the ram in the up position when stopped.