Actuation by hydraulic fluid power is simply the best way to efficiently move things with force. Around the world, wherever motion by machine has to accomplish the hard jobs, hydraulic fluid power makes it happen. Given all of this, however, there still is radical change afoot in hydraulic actuation, and it has nothing to do with how actuators move things but rather the way that movement is controlled and, in non-passive damping applications, the speed of movement.

A hydraulic actuator, or more commonly a hydraulic cylinder, is a motor—a device that, in this case, converts the energy of hydraulic pressure into mechanical energy, causing or damping motion. Traditionally, control of the hydraulic cylinder motion has been embodied in the human at the controls. Over the past several years, however, computers have begun to replace human operators, or in situations where a human is still involved, the control is being expressed to the actuator via electronic signal (action-by-wire, such as “fly-by-wire”). In either case, there is a new requirement for the cylinder to accurately relay back to the controller the extension or position of the cylinder rod along its stroke in real time.
For years, cylinders have had limit switches to indicate if the cylinder has reached the maximum and minimum points of stroke. To do “real” motion control with a cylinder, as in action-by-wire or with servo-type closed-loop systems, the cylinder must be equipped with some sort of proportional output linear position sensor to indicate to the control system the cylinder’s extension and sometimes its velocity as a derivative of position over time. The radical change in hydraulic actuation is represented in the demand for so-called “smart cylinders”—cylinders that can tell you where they are in their strokes and sometimes how fast they are going with great accuracy and reliability. 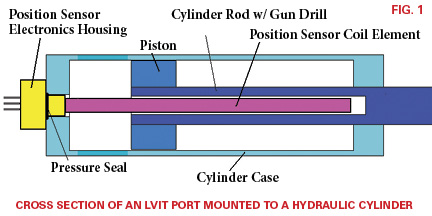 As the demand for more and better linear position feedback from hydraulic cylinders has increased, one technology for providing that feedback has emerged: magnetostrictive sensing.

Magnetostrictive sensing has earned its place of prominence for good reason: despite its complexity, up until now it has met most users’ requirements for resolution, measurement tolerance, measurement range, temperature coefficient, susceptibility to environmental conditions, ability to physically integrate into the cylinder, and overall economy. Also, it is contactless, which means it relies on a magnetic field to actuate its function and thus cannot wear out like a potentiometer or resistive position sensor. Contactless sensors like magnetostrictives are often referred to as “infinite-life sensors.” (Not to say other things can’t go wrong in the meantime).

Magnetostrictive sensing uses “time-of-flight” measurement to indicate distance just as radar or ultrasonic sensing does, but the time of flight measured is of a current pulse going down a very special wire called a “waveguide.” A torque or twist in the waveguide occurs when the pulse encounters a magnetic field at the measured point. This twist at the target point produces a sonic wave that propagates back to a pickup that ultimately translates it into a voltage pulse. The whole process is timed so the amount of time it takes for the current pulse to go out and the sonic pulse to come back and generate a voltage pulse is directly proportional to the linear position of the object being sensed. To allow all of this to happen in a hydraulic cylinder, a gun-drilled hole is run down the center of the cylinder rod to accommodate the length of the wave guide, which is encased in a stainless steel tube that extends from the sensor’s electronics housing. A ring magnet is placed into the piston end of the cylinder rod at the head of the gun-drill hole to actuate the sensor as the cylinder rod extends and retracts. 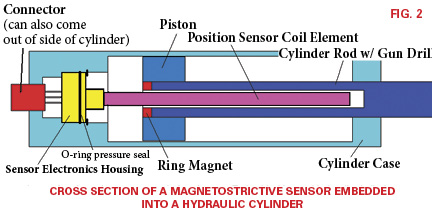 There are several other ways that position sensing can be done within the physical context of a hydraulic cylinder, including magnetoresistive sensing, resistive (potentiometric) sensing, Hall effect sensing, and sensing using linear variable differential transformers (LVDTs), but none come close to the volume of application of magnetostrictive sensing. Despite its popularity, in recent years it has become evident that there are certain drawbacks to magnetostrictive linear position sensing in certain broad and not-so-broad swaths of hydraulic cylinder applications. This has engendered a new look at a late 20th-century position sensing technology first commercialized at Schaevitz Engineering in conjunction with David Fiori, Jr. (whose patents were crucial to its development): the linear variable inductance transducer (LVIT).

The LVIT is the simplest of magnetic field-based position sensors. Mechanically, the sensor is nothing more than a single coil of wire wrapped on a fiberglass rod with the two electrical connections to the coil used to simultaneously excite and then measure the magnetic field variation that corresponds to the position of a moving conductive target. It is an eddy current device based on high frequency alternating magnetic field physics that depends only on the effect of the conductivity of the moving target. Since only the conductivity of the moving target is important, it is capable of working over an extremely broad range of temperatures without the use of magnets or exotic and expensive materials.

Electronically, the eddy current effect results in a change in self-inductance of the sensor element. This inductance determines the resonant frequency of an oscillator circuit, and it is this frequency that provides the position information interpreted and conveyed to the device’s output by the built-in microcomputer interface. The target does not contact the coil, thus making it a contactless, so-called “infinite-life” sensor.

When one compares the simplicity and robustness of construction of the LVIT with the complexity and delicacy of construction of the magnetostrictive sensor, a primary advantage of the LVIT comes quickly to light. Linear sensor-equipped hydraulic cylinders are increasingly being employed in heavy-duty industrial and mobile applications where significant shock and vibration conditions are the norm. The inherently fragile nature of the magnetostrictive sensor is a major cause of concern in such applications, whereas the LVIT can be considered virtually indestructible over time. The internal physical robustness of the LVIT is particularly important to the emerging active and semi-active hydraulic shock damping systems that are in development primarily for defense-wheeled, track-tactical, and logistical vehicles. Here the linear sensor provides the vital shock deflection feedback that allows the damping system to react to road and vehicle conditions in real time (you can imagine the punishment they take). 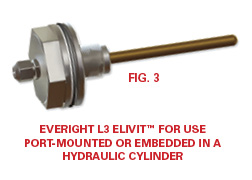 Another LVIT attribute that takes up where the magnetostrictive sensor leaves off is in maximum operating temperature. There are increasing numbers of smart cylinder applications (particularly in mobile hydraulics) where operating temperatures are at least 125°C and as much as 150°C due to the operating environment of the cylinder and/or the rapid movement of fluid into and out of the cylinder via small orifices that causes heating. The waveguide material of a magnetostrictive sensor begins to lose its requisite operating properties above about 100°C, thus causing a marked deterioration in the output quality of the magnetostrictive sensor above 100°C, making it useless for high-temperature applications. Given the right electronics, an LVIT has no problem operating up to 150°C, again making it suitable for the advanced vehicle shock damping systems mentioned above that routinely operate in that temperature range.

LVITs generally have an approximate total measurement tolerance of < +/-0.15% of full-scale output, which is certainly not as good as magnetostrictive linear sensors but more than adequate for most industrial and mobile applications. Magnetostrictives can also go to much longer measuring ranges (20 feet or more) than LVITs. Other notable attributes of the LVIT include the following:

As the need for proportional linear position feedback from hydraulic cylinders grows with the increasing prevalence of remote or “by-wire” motion control functionality in industry, more is demanded of the linear sensor integrated into the cylinder. While dominated by the magnetostrictive sensor, the market for linear position sensors is now demanding a more robust solution that can also operate at higher temperatures in many industrial and mobile applications. The LVIT appears to be that solution.