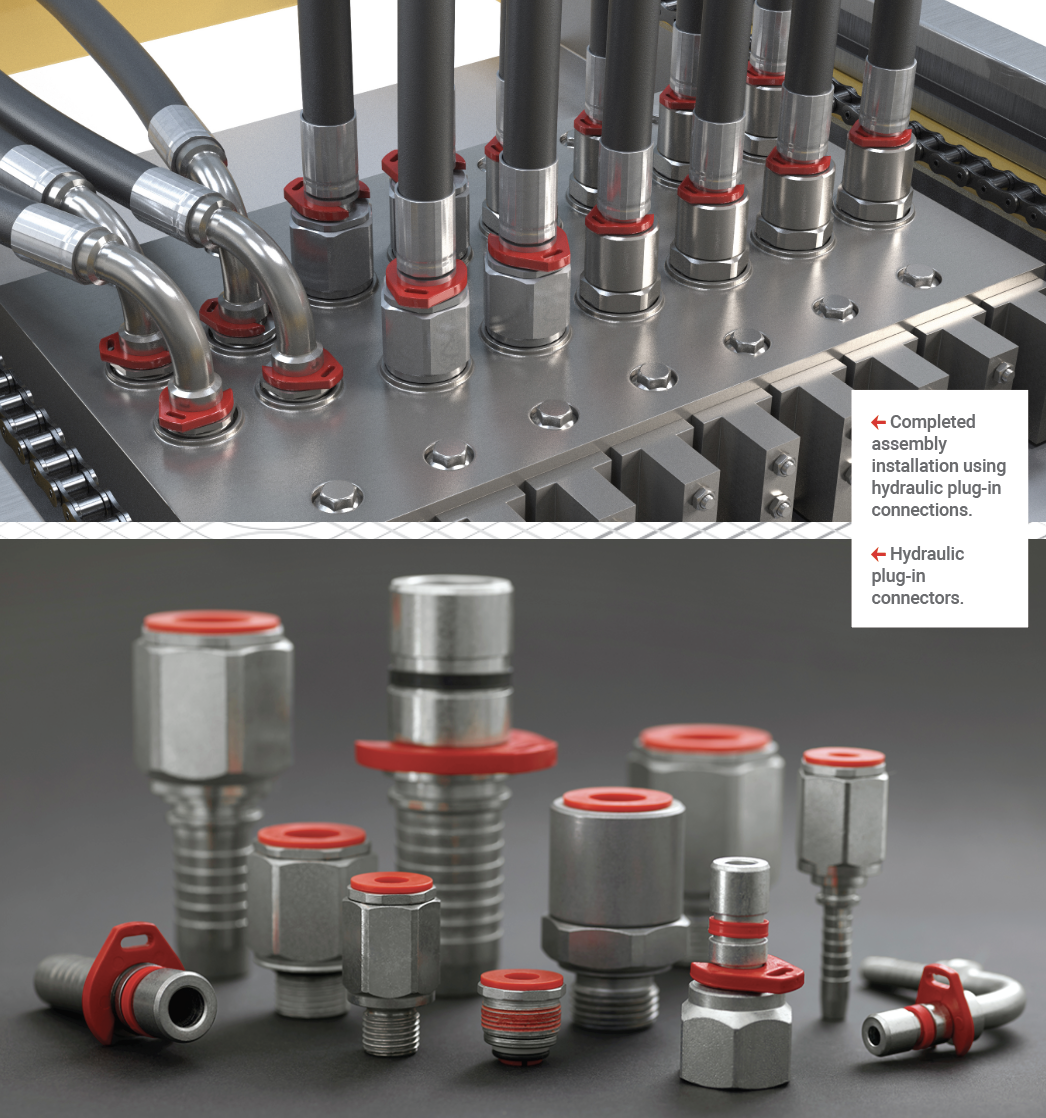 Before a production employee installs hydraulic components, the OEM’s engineer team completes quite a bit of design work. During overall machine review, engineers focus on the hydraulic hose and tube assemblies for a particular machine build. The engineers identify system needs and calculate component demands. Once a parameter is set on the hose and tube assemblies, they use the STAMPED formula as a guideline: 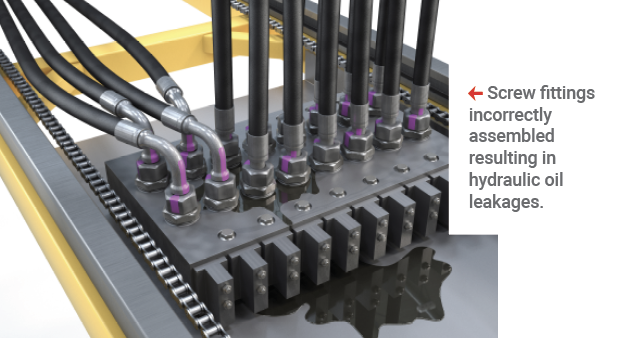 Multiple hydraulic hose and tube assemblies in a series with little distance between the end connection fittings, allowing a connection to be incorrectly torqued (under or over).

In an ideal installation setting, the production employee first reviews the installation instructions. Each connection point is properly marked, and the assembler has the right tools and the needed installation values. The assembler begins installing in a series (logically from left to right when using a typical right-handed thread). The equipment then continues to the next steps of production and eventually arrives for quality testing and inspections. If one or more of the hydraulic assemblies in the series is leaking hydraulic oil due to incorrect torque values, the equipment is tagged for rework. The problem and major frustrater is when a hose or tube assembly leaks within the series, especially when it is near the middle of the series. This requires removing all installed assemblies within the confined series prior to this leakage point, essentially reversing the work completed in the installation process. Once the corrections are made, the technician must reinstall the remaining hydraulic assemblies. Quality testing and inspections are performed again, and the passed equipment proceeds further in the production process. Additional failure situations would repeat the above process.

As in scenario 1, the production employee reviews instructions and has the proper tools and installation values. In this case, the assembler is installing hose and tube assemblies with little clearance for both the installer and the required tools. In areas of confinement – e.g., a front-loader cab being positioned and installed over the chassis – when the worker is ready to move forward, the installer uses the available space and mates up the appropriate assemblies to begin the installation process. This limited space causes time delays as the installer adjusts to gain better positioning and leverage to achieve a good connection fit. Eventually, the installer completes the work, allowing the equipment to progress further down the production line, including quality testing and reviews.

Hydraulic plug-in connection technology has been in use for more than 25 years with millions of units in the field. There are several versions of the connections produced by a handful of major manufacturers. While each version is slightly different, the core operational concept is the same. Instead of relying on an operator to wrench together two threaded connection ends at final assembly, a hydraulic plug-in connector allows the installation of components at subassembly points, eliminating problems experienced later in the assembly process. An installer plugs in the components at final assembly and then validates a complete connection with a simple pull test. No extra tools are required.

To better understand the operation of the connections, let’s review an example, the WEO Plug-In system. As with all hydraulic plug-in connections, these consist of a male half (nipple/plug) and a female half (coupling/socket). The male half is predominately crimped onto the hydraulic hose assembly while the female half is installed on the connecting hydraulic components (i.e., valves, manifolds, and so on). Both halves are also available in common thread options to allow integration benefits without the need to modify an existing core system. Additionally, they are designed to offer the greatest flow values for each respective size and are acceptable for most pressure rating demands in OEM equipment, considering necessary safety factors.

It is simple for a production line operator to install a hydraulic plug-in connection once the engineer implements it within the equipment design. The WEO nipple and WEO coupling (or WEO cartridge) are individually installed to their respective hydraulic subcomponents. Logically, this is completed at a production step where there is more room for an operator to work. 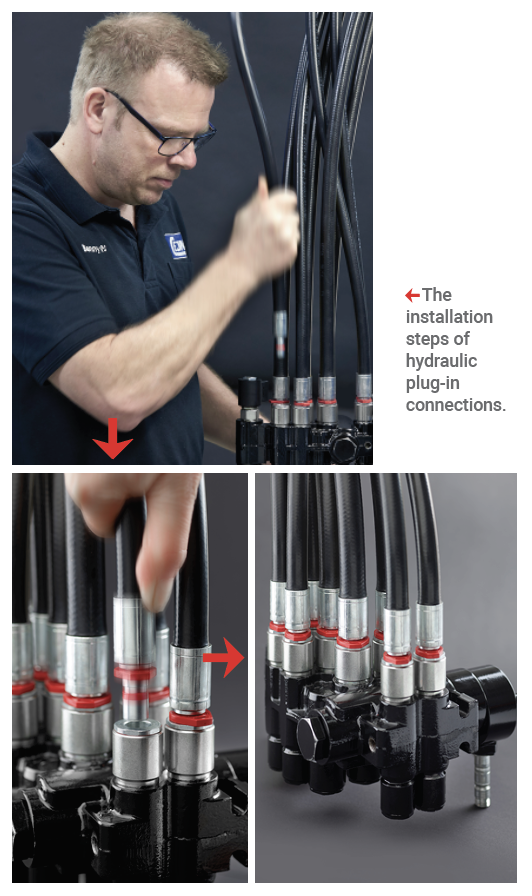 The WEO nipple, with the assembly stop clip attached, is inserted into the corresponding WEO coupling or cartridge until it firmly stops. The installer then performs a simple pull test to ensure the assembly has been properly connected.

The cross-cut image above shows a fully assembled hydraulic plug-in connection. Once installed, the assembly is held in place by a system that fits and locks into the respective nipple. The image also shows that this connection is completely sealed (typical NBR primary with an additional backup ring). If the assembly ever needed to be disassembled – for example, for a hose replacement in the field – all that is needed is a flat-head screwdriver. Simply remove the assembly stop clip, push in the nipple until it stops, and then pull the hose assembly out.

One advantage of a plug-in connection is elimination of torque issues during hydraulic hose and tube assembly installation. If the standard operating procedure is to just plug the fitting in and perform a simple pull test, it eliminates the need for calibrated tooling and access issues when dealing with series installation. The result is an overall reduction in rework concerns.

Another benefit is the reduction of production time lost during installation of assemblies in difficult-to-reach areas. A production line worker will not have to continually reposition or struggle with tooling in tight spaces. Less struggling equals greater productivity and output, resulting in less time lost.

Equipment OEMs seeking manufacturing improvements and efficiencies on their products and assembly lines creates opportunities for improvements to hydraulic hoses and tube hybrid assemblies. In the right areas, a hydraulic plug-in connection brings significant time and cost savings by eliminating the installation issues discussed above.