Measuring Up: SGH Technology in Hydraulic and Telescopic Cylinders

With the new wire-actuated encoders SGH25 and SGH50, Siko has expanded the spectrum of the SGH series, which can now measure lengths ranging from 0 to 5 meters. This is made possible by an innovative, cable-based functional and design concept that fully integrates sensors, electronics, and mechanics into the cylinder. This compact design is now also suitable for long cylinder strokes, including hydraulic and telescopic cylinders of construction machinery, agricultural machinery, or commercial vehicles. The sensors fulfill a central requirement that the cylinder length should ideally not increase when a sensor is installed.

While the SGH10 wire-actuated encoder covers ranges between 0 and 1 meter, the SGH25 and SGH50 advance into larger ranges. With measurement lengths between 0 and 2.5 meters, the SGH25 is suitable for medium stroke paths, while the SGH50, with stroke lengths between 0 and 5 meters, is suitable for applications with relatively wide measurement ranges. To meet the manufacturer’s requirement for a cylinder design with as little change as possible after sensor integration, the larger drums on which the cable is wound have been tilted 90° on the SGH25 and SGH50, so that the installation length of the three sensors is identical despite the different measuring lengths.

SIKO drew on more than 30 years of experience in the development and production of wire-actuated encoders. This has resulted in the development of a core competence, which has also been incorporated into the development of SGH technology. With the SGH sensors, Siko has a unique sensor technology that can even be used in piston accumulators and telescopic cylinders (a global first). Their compact design can be completely and space-efficiently integrated into a cylinder.

Instead of using a rod-based measuring principle, SGH sensors are based on a flexible wire-actuator mechanism. If the cylinder extends, the cable, which is wound up on a cable drum, is pulled out. The rotation of the cable drum is detected without contact by the sensor electronics and used to calculate the linear travel. This makes it possible to detect the position and speed of the cylinder precisely and completely. The magnets used to detect the rotation are scanned by the electronics without contact through the pressure-resistant base plate of the SGH sensors. The electronics are fully encapsulated on the unpressurized side of the system. This means that the entire measuring system is built into the cylinder and is optimally protected from external environmental conditions. The advantage of this is that, in contrast to a measuring system mounted externally on the cylinder, the sensor system cannot be damaged, negatively influenced, or even destroyed by environmental influences.

The cable-based concept enables solutions that were previously unthinkable. Forklift truck designs, for example, may not exceed specified vehicle heights, but nevertheless should have the longest possible stroke. Siko meets these demanding requirements by intelligently delocalizing the SGH sensor in a housing laterally mounted at a 90-degree angle to the cylinder. As a result, the SGH sensors can “measure around the curve” and thus can be integrated into almost any cylinder. Due to the unique lateral installation, SGH sensors can also be used in difficult applications, including those with zero stroke-loss tolerance, extremely small piston diameters, or cylinders with mechanical cushioning.

External environmental factors also include shocks or vibrations that regularly occur with excavators or dump trucks, for example. If an excavator bucket collides with hard ground or the loading area of ​a dump truck locks in, these abrupt movements trigger vibrations. All SGH sensors are immune to them because the cable absorbs shocks, and the entire SGH system can also use the hydraulic medium as a “shock absorber.”

SGH sensors are robust and resistant. To consistently maintain this level of quality, Siko carries out the product-specific trim of all mechanical and electronic sensor components and designs power ratios, spring characteristics, or drum speed itself. In addition, Siko developed a special housing plastic that achieves top performance even under the most extreme conditions and protects the entire system. One of these quality assurance measures is that SGH sensors are designed and tested for the service life of a cylinder.

The innovative, cable-based design and functional concept of SGH technology ensures a significant reduction in system integration costs. Comparing SGH sensors with the construction of magneto-restrictive sensors, it becomes clear that for the use of magneto-restrictive sensors, which requires a different length of the sensor rod for each cylinder corresponding exactly to the measuring length, a hole must be drilled in the piston of at least that same length. This hole is not required for SGH technology.

Ultimately, the saving of this manufacturing step with SGH sensors has a positive effect on cylinder production costs, since production times are shortened and the costs for piston drilling and assembly of the position magnet are completely eliminated. With SGH sensors there is instead just the cable, which is fixed by a small thread on the piston head. The SGH50, for example, with a maximum stroke of five meters, offers the maximum potential for savings. A hollow bore required in rod-based sensors generally affects the structure and stability of the piston and thus the function of the entire cylinder. With SGH technology, cylinder manufacturers are not confronted with this disadvantage.

SGH sensors show their strengths especially in terms of variant diversity. The practical teach-in function is a valuable tool. It is standard in all SGH versions and offers a high level of functional and operating convenience. An SGH sensor can be programmed (“taught”) any measuring length. Within the measuring range of 0 to 1 meter, 0 to 2.5 meters, or 0 to 5 meters, this intelligent function maps all measuring lengths with a single SGH sensor and thus significantly reduces the number of variations for the cylinder manufacturer.

To ensure the transmission of position information to machine controllers of as broad a range of machines as possible, SGH sensors are characterized by a high variety of interfaces. Thus, the SGH technology can either be obtained with an analog interface for measured value transmission or, alternatively, with the digital interfaces CANopen or SAE J1939. Even safety-critical applications can be operated with CAT3 or PLd-compliant versions (according to EN 13849) and redundant analog interfaces, redundant CANopen, redundant SAE J1939, or CANopen Safety. 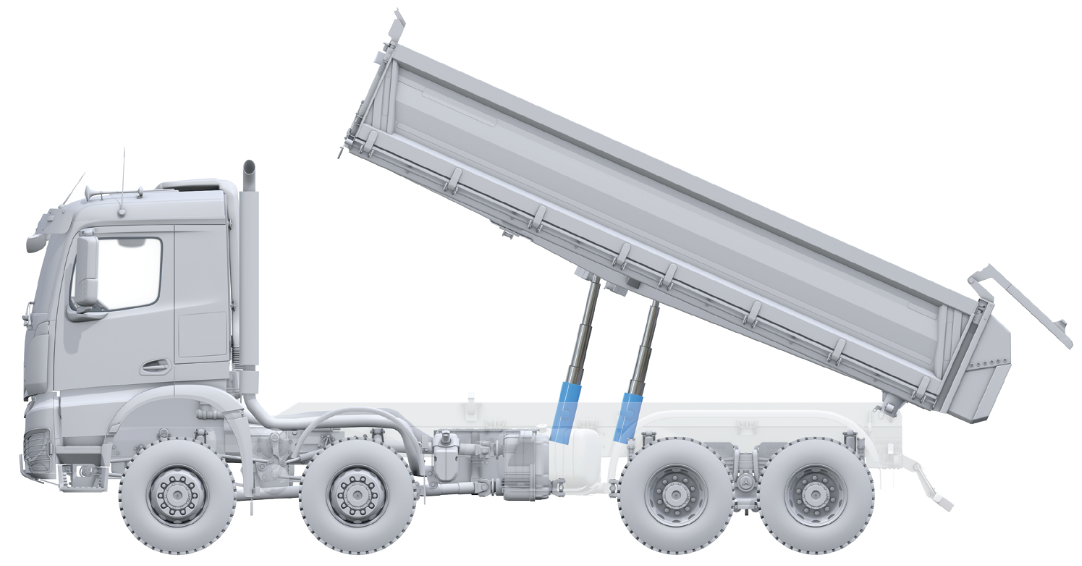 Due to the complete SGH system integration in the cylinder, SGH sensors provide maximum protection against environmental influences such as dirt, dust, and water. Protection class IP69K guarantees this, and the SGH position sensors are equipped with IP69K-compliant KV1H connector systems. The modular nature of the universally applied KV1H connections significantly reduces effort and costs in manufacturing, service, design, and logistics, as the KV1H connector system is extendable. Thus, the sensor always remains the same for different cable lengths or connection types.

Overall, the use of this variable function and design principle contributes significantly to minimizing the number of variations. SGH sensors cover entire measuring ranges and do not require a separate sensor per measurement length, as is the case with conventional sensor solutions. For cylinder manufacturers, SGH technology optimizes the entire development and production process as well as downstream services such as logistics.