A casting company had a large heat treat furnace used in its process of making knuckles and suspension components for major automakers. These “squeeze-casted” components would go through a heat treat before shipping to the automakers. The furnace had (2) 5″ bore x 3″ rod x 60″ long cylinders that opened and closed the doors for loading the parts. The hydraulic system used a water-glycol fluid with a maximum system pressure of 1000 psi. The system did run at the maximum temperature suggested by the water-glycol manufacturer. The cylinders would be replaced annually as part of a once-a-year preventative maintenance program. The cylinders pulled off would then go out for repair and, at minimum, have all the seals replaced.

About two weeks after a replacement, the rod seal on one of the cylinders failed catastrophically. The cylinders were “rod up,” and fluid shot up to the ceiling of the three-story facility. Upon disassembly, fine particulate was found around the rod seal. It was assumed that contamination had entered the cylinder and destroyed the wiper seal and eventually the rod seal.

Jon Rhodes, an IFPS Hydraulic Specialist (and now a CFC instructor) said he paced back and forth for a while and took a break after his first initial inspection, trying to determine the source of the contamination. He decided to re-examine the rod seal area again and realized, to his surprise, the rod back-up seal was missing or overlooked during re-assembly. (See the picture taken during inspection.) The cylinder repair company used in the prior re-seal insisted that they had installed a urethane back-up ring in the rod seal cartridge assembly. 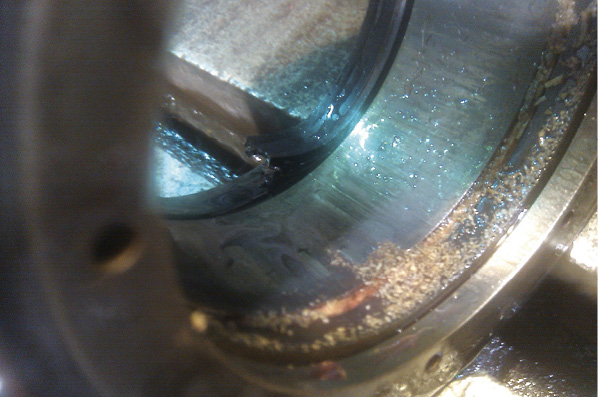 Any ideas what happened?

Most cylinder manufacturers and cylinder repair houses now commonly use urethane seals. They are strong, durable, and great for normal hydraulic fluids. Unfortunately, water-based fluids and heat degrade urethane rapidly. The fine pulverized particulate found in the rod seal area was what remained of the urethane back-up ring. Jon Rhodes had originally supplied the customer with new cylinders designed around the water-glycol fluid they were going to use, and the cylinder manufacturer did not use urethane. Repair houses should always know what fluid will be used in the cylinders they repair.