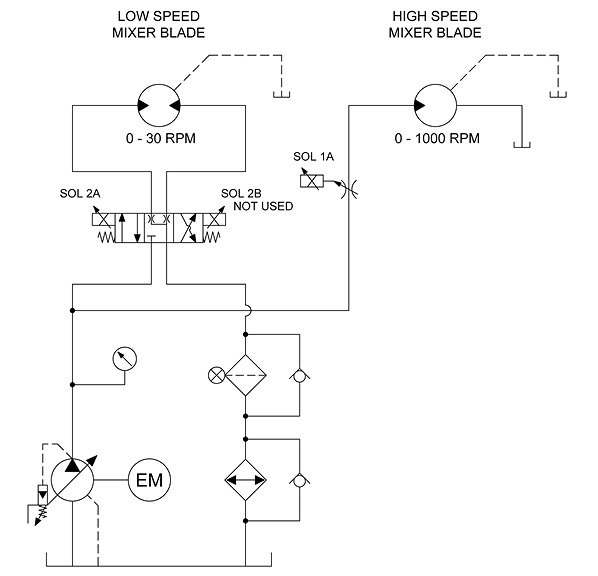 A large OEM ink manufacturer of various printer inks had a speed problem on a 400-gal ink mixing machine after we upgraded the proportional valve control system. We observed the speeds of both mixer blades and spoke to a long-time operator of the machine on how fast the normal blades rotated before designing the new control system.

The slow speed normally runs at 24 RPM, while the high speed would run at 900 RPM. The existing hydraulic power unit had a new pressure compensated piston pump and all else looked in good condition. The operator said the hydraulics were working well set at 1,000 PSI and only the controls needed to be replaced. We were also told to build in maximum speed limits of each blade circuit to those shown on the drawings.

The unit was up and running fine when we left the job site, but a few weeks later we got a call that the mixer had a problem.

The operator was mixing a thicker ink formula that required upping the high-speed mixer blade to 1,000 RPM, but after he made the adjustment, the slow speed blade would drop down to 18 to 19 RPM when he needed the 24 RPM speed. When we arrived, we found that when the speed of either one of the blades was increased higher than the normal speed, the other blade would slow down. The hydraulic unit was reading 1,000 PSI as we found it earlier. We checked the case drain flow of the pump and it did not indicate that the pump was failing.

What was causing the problem?

The source of the problem of adjusting the speed of one mixer blade and how it affects the speed of other blades turned out to be the compensator setting on the pump. It was set at 1,000 PSI and just needed to be set an additional 100 PSI to resolve the issue. Apparently, due to the lack of good documentation, when the pump was replaced, the team set the speeds and pump pressure to what worked for the normal consistency inks and not for the occasional thicker mixtures.