Then and Now: Looking Back/Forward 25 Years

A careful look at the last 25 years in the fluid power industry reveals both exciting and distressing news. We tend to look at the ground immediately in front of us and seldom lift our eyes to the horizon to see what may lie ahead. We often take action based on the immediate and the urgent, rather than by future potential and the important. We are restrained from taking risks because of the perceived consequences of failure. The “bottom line” has become the bottom line without a view to what will best meet the needs of those who rely on our products and designs.

In 2014, Peter Achten of INNAS BV, made a presentation about innovation to a group of leaders involved in the fluid power industry. He revealed that, in the area of commercially available hydraulic pumps and motors, there has been only incremental improvements during the past 25 years. This is not to say there are no improvements, but that the improvements have been minor alterations in existing technology. It seems that once a new technology has been embraced, it becomes the standard, and few can imagine any serious deviation from the concepts. Companies ride the success of the new technology with minor iterations to meet market demands. 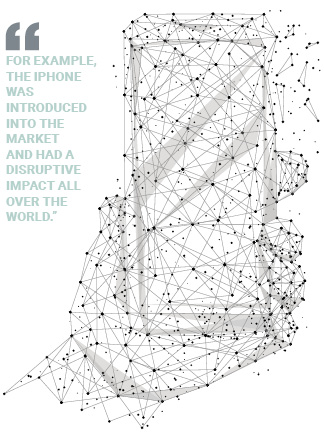 Achten stated, “After a few years of development, the technology becomes mature and the innovations become incremental… Some of the best innovations are simple. But they should never be ordinary, trivial, and –most of all–not asked for by the market.” When the market asks for an innovation, it is usually looking for an adjustment of an existing technology; something a little better, but still within the comfort zone. Manufacturers will eagerly gear up to make incremental changes, but are reluctant to throw out what has been working just fine for a totally new approach.

Achten continued, “Innovation starts with imagination: to imagine an ideal concept, without even knowing how this concept can be realized or materialized.” This is what produces wonderful, disruptive innovations.

For example, the iPhone was introduced into the market and had a disruptive impact all over the world. It was not asked for by the market, but it was imagined, developed, and introduced. The smartphone quickly replaced the mobile phone and had a major impact on the camera industry as well. Since then, there have been incremental innovations that will likely continue as the technology matures.

The fact that there have been no “disruptive” innovations in fluid power for over 25 years should not be distressing. It should be exciting. It means that we will have an opportunity to embrace the new technology when it comes, and it is coming.

There are several, totally new concepts on the horizon. With hydraulics, there is the floating cup technology for pumps, motors, and transformers; Digital Displacement® pumps and motors; and the Variable Displacement Transformer. In pneumatics, there is load sensing, digitized control, and the pneumatic VDT. And there are certainly others that have not yet shown up on our radar. If any one of them should become mainstream, it will dramatically disrupt the market. When that happens, we can either resist by continuing to use the comfortable old technology … and get left behind, or we can adapt and ride the new wave. 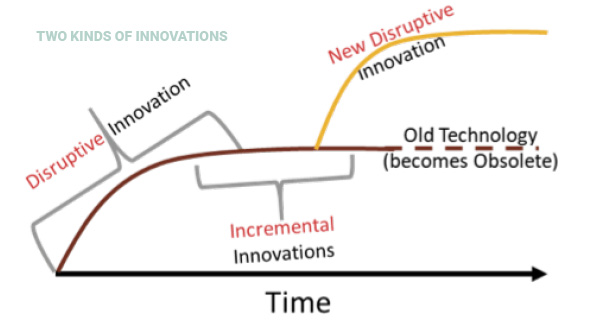 So in reviewing 25 years of fluid power history, let us not just look at how far we have come and think that we have arrived, but let us brace ourselves for what is coming.

It is not the nature of most companies to crave disruptive innovations. We are more likely to try to maximize profits with what is common and comfortable than to take risks on a radical new idea or a new way of thinking. So it was in 1994. Large fluid power distribution companies were buying up relatively small, family-owned businesses and attempting to merge them together into cohesive organizations. These large companies were competing against each other for a share of the fluid power distribution business, not to provide a better product, nor to increase efficiency, but to improve the bottom line. To be competitive, it would be necessary to reduce operating costs.

The small companies that had been bought had serviced loyal customers by building hydraulic power units, designing and/or putting together pneumatic systems, and providing technical help. The new companies thought it would be more efficient to centralize engineering and manufacturing. Distribution and manufacturing centers were set up, strategically located to provide quick delivery of components, using call centers staffed with people who would answer phones and write orders, and who needed very little knowledge of fluid power. Fluid Power Certification was neither a requirement for employment, nor necessary for advancement. The number of people who did application engineering was reduced with the idea that much of the engineering could be pushed back onto the component manufacturer.

However, the same culture was permeating the industry at the component manufacturing level. The large manufacturers were attempting to grow by acquisition, buying up smaller, independent companies, and merging product lines. Some of the engineers from the smaller companies were not included in the mergers with the thinking that their skills would be redundant to the existing engineering staff. This caused a depletion of some of the expertise required to support the new product mix. At the same time, manufactures focused on larger OEMs because this would have the greatest impact on the bottom line. They geared their production to meet the demands of large quantities with a narrow product mix.

Distributors found that products with high demand were having longer lead times and products with more narrow applications did not have strong support from the factory. Application engineering was being pushed down to distribution.

The net result was that the end users were caught in the middle. If technical help was needed, the new distribution companies often lacked the depth of engineering skill to properly address the issue and the understaffed manufacturers were overwhelmed with requests for help from distribution.

This trend has continued, but distributors and manufacturers are beginning to recognize the need to have certified fluid power professionals responding to customer needs. There has been a steady increase in the number of certifications issued by the International Fluid Power Society. Ironically, the number of community colleges that are offering quality fluid power training is diminishing.

This is not to say that there have been no significant innovations or changes in the industry over the last 25 years. On the contrary.

One of the most remarkable changes in the industry has been the advances in electrical and electronic controls. In hydraulics, advancements in proportional valve technology has allowed these valves to replace a large portion of the market that was once dominated by servo valves. Proportional control of pneumatic components has had a great impact on the efficiency of pneumatic systems by providing infinite adjustment of pressure regulators and flow controls. Pneumatic valves have become much smaller without diminishing flow rates and so the energy to power the solenoids that drive pneumatic valves have steadily been decreased. What once required 4 Watts of power is now using as little as 0.1 Watts. Wireless controls of mobile hydraulics and pneumatic manifold systems have replaced delicate wiring.

Manifolds have helped reduce the size of hydraulic control systems as well as reduced the number of potential leakage points. Pneumatic manifolds serve as communication hubs on an industrial fieldbus network, managing inputs and outputs for many devices in addition to the directional control valves.

There has also been a change in the demographic of those entering the field of fluid power. Programs like Lead the Way and FIRST Robotics have encouraged high-school students to enter fields of engineering with fluid power being a major draw. Young women who are interested in science and technology are being encouraged to pursue careers in these areas. As a result, more and more women are entering the field and taking leadership positions.

While the industry has a long way to go in the area of efficiency, the awareness of the need has grown steadily, and some remarkable products are coming into the market. The load sensing, variable displacement pump was an improvement to the pressure compensated pump. Then came torque limiting and power limiting pumps that allowed both mobile and industrial equipment to use smaller prime movers, which reduced installed cost as well as saving energy. The new digital pumps and motors are entering the market and allow computer controlled, nearly instant, pump and motor displacement control.

A study by Oakridge Labs brought the industry to the attention of the U.S. Department of Energy (DOE) and led to the creation of the Center for Compact and Efficient Fluid Power (CCEFP) with grants from the DOE to develop more efficient components. In addition, the conferences on Energy Efficient Hydraulic and Pneumatic Components (EEHCP) looked for ways to produce more efficient systems that would incorporate the newly developed efficient components.

As demand for smaller and lighter systems grew, especially in the mobile market, higher pressures are being used today than would have been considered 25 years ago. These higher pressures demanded better machining for tighter tolerances to reduce internal leakage. New hydraulic fluids, sometimes with special additives, that could maintain the appropriate boundary layers for lubrication were developed to meet the needs of the better machined components. The tighter tolerances also demanded better filtration and better means of determining fluid cleanliness. Studies were conducted to determine how clean the fluid would have to be to prevent failure of various components. This is now known as the ISO Cleanliness code. It requires counting three reference sizes of particles: 4 µm, 6 µm, and 14 µm in a volume of fluid evaluate the cleanliness of that fluid. And lubricating pneumatic components has become a thing of the past.

Another major change, and a matter of some consternation in the U.S., is the incremental move to the metric system. Quoting Richard Bullers, “We are moving into the metric system, inch by inch.” Due to more and more components being sold internationally, it became apparent that it would be wise for us to all be speaking the same measurement language. Responding to this, the International Fluid Power Society is upgrading its study manuals, its certification exams, and its Math for Certification booklet to show all equations in both metric and U.S. Customary terms (see example in chart below).

Yes, we have come a long way, and there are even greater advances on the horizon. Welcome to the future of Fluid Power!

Dan Helgerson, CFPAI, CFPS, sat on the International Fluid Power Society Board of Directors as treasurer and is the technical editor for Fluid Power Journal. He can be reached at Dan@DanHelgerson.com