Counterbalance – verb: “to oppose or balance with an equal weight or force”

Counterbalance valves serve a very important role in hydraulic system applications because they are used to “counterbalance” the weight of the load to control it when lowering, and can also be used to trap fluid to hold a load indefinitely. These valves are particularly important in safety applications where the uncontrolled movement of the load could cause injury or death.

Some key things to understand about counterbalance valves:

So with all these things in mind, how do we specify the correct counterbalance valve for a given application? There are two key aspects to specifying counterbalance valves that will be covered in two articles. Article one is about selecting the pressure setting range, when to use a valve with internal pilot only, and understanding release pressure. Article two is about how to size the valve for optimal load control. These two are related, the first is a static calculation based on load, actuator size, and circuit layout, and the second is based on dynamic conditions so flow resistance through the valve, load dynamics, and system stiffness must be considered. For this article, I will deal with the static side of this issue.

First, let’s take a look at the basic symbols so we can understand the working areas in a typical counterbalance valve. Shown below are the pressure control symbols. The check valve has been omitted for clarity, but is always used to allow free flow around the pressure control to raise/move the load in the opposite direction.

Next, we need to understand the force balance on the counterbalance spool to determine the pressure required to open the valve and start to move the load (called the release pressure). In order to hold the load, the valve cracking pressure setting must be set higher than the load pressure. Because of the hysteresis (friction) of the valve moving parts, there is a difference between cracking and reseat pressure (the pressure at which the valve closes) with the reseat pressure being lower than the cracking pressure. For this reason, the setting on the valve for the typical counterbalance valve setting is roughly 30% above the load pressure to insure the reseat pressure will be high enough to hold the load.

The images below show the working areas of the counterbalance poppet and corresponding force balance. 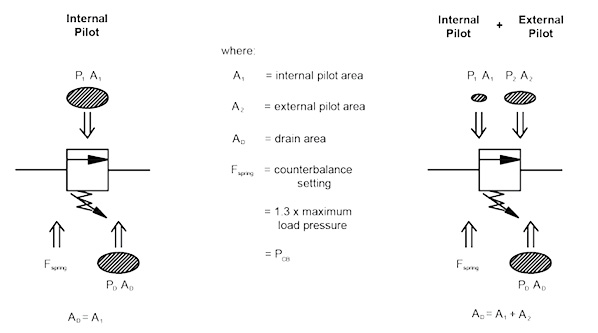 Now consider four load states with a single-rod cylinder, load pulling the rod out so we can understand where an external pilot can be used to decrease the release pressure and increase system efficiency, especially with varying loads: 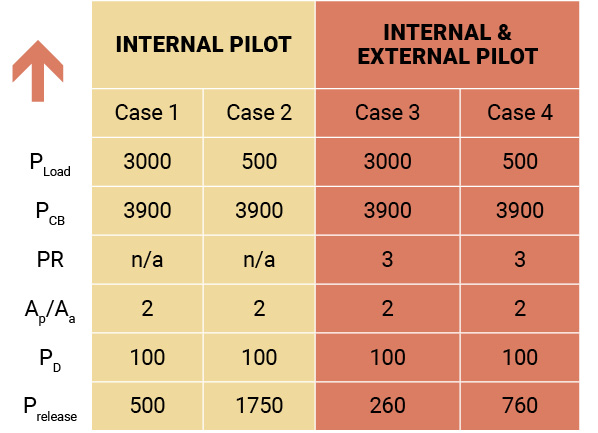 So you can see that for the internally pilot valve, when the load is high, the release pressure is low, but when the load gets light, the release pressure is high. We should always let gravity do most of the work of lowering, if possible, while still being in control of the load, this is the most efficient. We should not be using high power to lower a load. So if the load is constant, then an internally piloted counterbalance valve is the correct choice, as it will always be set the same amount above the load.

We have covered one part of the puzzle regarding counterbalance valves. The next part will review the dynamic operation of the valve once it has opened and the load starts to move.