Indexing drives are an essential element of many automation systems which process parts in volume. They allow sequential operations to be made on multiple parts simultaneously, thus speeding production. Most engineers are familiar with cam and servo drives for indexing, but this article introduces a simple, low-cost alternative to these traditional solutions.

Common applications in automation for repetitive rotary indexing include:

There are at least three types of indexing drives that the engineer can choose between for these applications:

The first two are well-known and available from many suppliers. Therefore the pneumatic indexing drive will be the focus here as an alternative to the others, which may reduce cost and complexity, in addition to adapting better to harsh environments. The following is a brief comparison of the three drives. 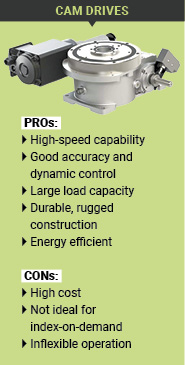 Cam drives have been used for many years and are capable of handling heavy loads, as well as achieving good accuracy, dynamic control, and high speed. They are typically driven by a gearmotor, with one revolution of the input for each incremental motion of the output. For synchronous machines, they are often driven by a common shaft that drives all motions in the machine. They are best suited for continuous indexing that does not require the motor to be started and stopped for each cycle.

A servo-based drive for an indexing application will include a servomotor with or without a gearbox, an encoder for position feedback, a motion controller, and an amplifier. Some of these components may be combined into integrated packages. There is normally a system controller such as a PLC overseeing the motion control, including a human interface.

Rotomation is one of the companies that offers a series of pneumatic indexing drives that are simple, mechanical components capable of repetitive rotary indexing with no accumulating error. They are based on rack-and-pinion rotary actuators with the addition of one-way roller clutches and a ratchet and pawl mechanism for stopping and registration of the shaft. No additional control elements are needed beyond those used for any other double-acting pneumatic cylinder. Because the motion is initiated by a standard directional control valve, they are well-suited to flexible automation where the index must occur on demand. They are robust and durable, but cannot match the controlled motion characteristics of the servo or cam drives. 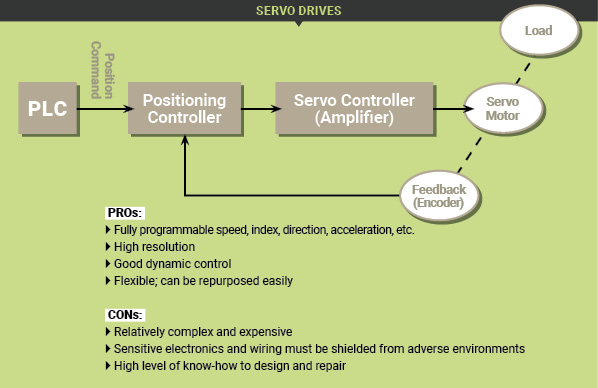 The Rotomation pneumatic indexer has operating characteristics which must be understood to obtain adequate performance. It operates in a two-step process. Typically, it is plumbed so that when in the normal (de-energized) state of the control valve, the indexer is in its locked condition. In this state, the shaft will not turn in either direction, and is in a registered position defined by the internal ratchet.

Once the work has been performed and the workpiece can be moved, the control valve is shifted and the indexer resets internally. In this condition, the shaft can rotate freely in the forward direction. For this reason, horizontal shaft applications are limited to those whose weight imbalance is biased toward the reverse direction, or which have sufficient friction to avoid uncontrolled motion. A small movement will have no effect on the cycle; the load will stop at the correct location on the next drive stroke.

A related limitation of the pneumatic indexer is that it has no ability to decelerate the load directly. This is a result of the one-way clutch used to allow the rack and pinion to reciprocate while the shaft goes in only one direction. Standard pneumatic cushions are available, which will decelerate the rack and pinion as the load approaches a stop, but the clutch will allow the inertia of the load to carry it on at its current speed. If the load has sufficient drag, either naturally or by addition of a simple drag brake, then the cushion can be effective by reducing the torque so that the drag will slow the load to a gentle stop.

The relative amount of energy that any of these drives consume will depend on the duty cycle of the application. Cam and servo drives are both quite efficient, but differ in that the servo uses full power to hold the load in place, whereas the cam drive uses power only when moving the load. A pneumatic indexer uses compressed air, which is notoriously inefficient, but also uses no power when in the locked condition. So if the duty cycle includes a high percentage of dwell time, the advantage shifts toward the cam and pneumatic systems.

The Rotomation indexing actuator is a simple, robust alternative to more expensive and difficult to implement servo or cam drive systems. Thousands of these indexers are in use around the world, providing reliable 24/7 service in a wide variety of applications.

One thought on “Pneumatic Indexing Drives for Automation”