Stamping presses that form and bend metal under pressure are themselves under pressure to improve throughput, process cost control, and energy efficiency. Many stamping presses have been in operation for 20 to 25 years and typically operate under punishing conditions – with cycle times between 100 ms and several seconds, and utilization rates ranging from 3,600 to 6,000 hours per year. That much operation consumes a lot of energy, which can significantly impact stamping press productivity and profitability (in the last decade, electricity prices have increased an average of 25% and higher in certain U.S. markets and to 50% in Europe). If the hydraulic systems driving your stamping press operate with less than optimum efficiency, there are multiple benefits that can be realized by considering the value of a hydraulic retrofit. 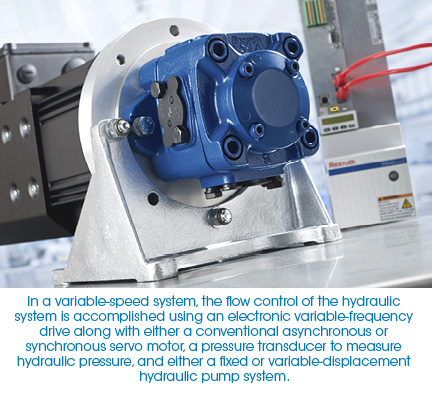 Focusing on the Energy Advantages of Retrofitting

The primary reason to consider a retrofit is to improve energy efficiency. Even on standard machines, energy costs can represent 20 to 30% of total life cost—and a much higher share with energy-intensive applications.

In a typical hydraulic stamping press operation, a majority of the energy consumed is to generate the force to stroke the ram. Conventional approaches utilize a variable-displacement hydraulic pump driven by an electric motor running at constant RPM. The hydraulic pressure requirements are regulated by a pump control, such as a pressure compensator, or by additional hydraulic flow and pressure control valves downstream of the pump.

With a constant RPM design, the motor is always running at rated nominal speed; even if the machine is operating at part load or idle, some motor horsepower is always being wasted. Simultaneously, internal hydraulic pump and valve leakage generate heat in the hydraulic fluid, which must be cooled to maintain optimum operating conditions. The cooling process also results in an additional energy demand on the system.

With the latest technology, however, it is possible to obtain significant energy savings with a retrofit that replaces a constant speed electric motor coupled to a variable-displacement or fixed-displacement pump with a “smart” pump system. The “smart” pump system can also eliminate the need for downstream pressure and flow control valves in some machines.

So what is a “smart” pump? It is a pump with intelligence to adjust flow and system pressure based on the process demand by varying pump drive speed. This is accomplished by varying drive speed and, in some cases, the swivel angle of a variable-displacement pump. In the variable-speed drive system, the flow requirements of the hydraulic system are controlled using an electronic variable-frequency drive (VFD) coupled to either a conventional asynchronous or synchronous servo motor. A pressure transducer provides a signal to control the hydraulic pressure. The combination of VFDs and variable pumps allows the system to operate at the optimal efficiency point of both the pump and motor. This reduces energy losses directly at the source.

A minimal configuration, consisting of a fixed-displacement pump and VFD, delivers a flow rate proportional to the drive speed of the motor. The closed-loop control is located in the VFD and reduces the drive speed to match the load conditions. Additionally, the variable-speed pump drive can be used to perform intelligent axis functions.

A properly integrated variable-speed pump drive can cut stamping press energy consumption by 30 to 80%. Using an on-demand control, the system can adjust the pump pressure and flow to the hydraulic actuator without the need for additional control valves. Consequently, the average input power is reduced over the entire machine cycle. Moreover, by not having valve-induced pressure drops generating heat, the temperature rise in the hydraulic oil can often be kept at a small value, reducing or eliminating the additional energy required for the cooling system.

Additional improvements may be realized when using variable-speed drives; the machine cycle can be smoother, minimizing maintenance and downtime. This can also extend the operational life of the press. Reducing the pump drive speed can lower noise levels of the hydraulic power unit by 10 to 20 dBA.

Investing in Retrofits: When is it right for you? 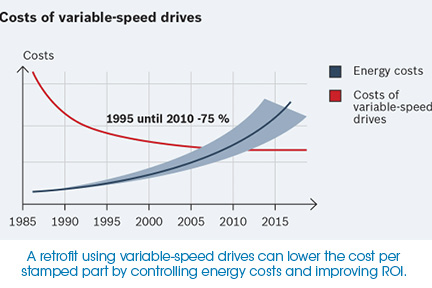 Each stamping press operation is unique, and the potential energy savings for any individual system varies. The important variable is the competitive pressure your operation faces in controlling costs and improving ROI. Here are five factors to weigh when considering a retrofit for a variable-speed drive hydraulic system for your stamping press:

1. Account for hydraulic system energy consumption. Improper evaluation of pumps, motors, and controls can have a significant negative impact on performance, reliability, and efficiency. It is critical to assess your current stamping operation in terms of cycle times, stroke action, and force to calculate the energy needed to generate the required flow and pressure. It is also valuable to assess the level of control needed to deliver the desired throughput, including the position and force required to fabricate parts precisely to your customer’s specifications.

For many applications, today’s variable-speed hydraulic pump systems are designed to be competitive replacements for constant-speed motors with fixed or variable-displacement pumps. The disadvantage with conventional systems is that motor speed cannot be reduced for partial load. Energy can therefore be wasted through a significant portion of the overall cycle.

In many cases, it is more efficient to achieve flow and pressure control by regulating pump speed and stroke than by using control valves. Because the energy is available as high-pressure hydraulic fluid, much of the energy is released in the form of heat as the fluid passes through a control valve from a high-pressure state to a low-pressure state. Control valve operation results in doubling energy waste. Energy is consumed when pressurizing the fluid, and then the energy is lost in the pressure drop that occurs through normal valve operation. This generates heat that will require additional energy for cooling. Additionally, dissipating the heat will require large heat exchangers that are operationally complex and expensive.

The solution: Take advantage of a variable-speed drive’s intelligent adjustment of motor drive speed to meet the precise demand and avoid inefficient energy waste. A pressure transducer is used to measure the hydraulic pressure and adjusts the pump speed accordingly. No excess flow is generated, and less efficient throttling control utilizing proportional valves can be eliminated. Energy is saved by avoiding the pressure drops and the corresponding heat generated by control valves, which must be dissipated using cooling systems.

The solution: Retrofitting to a variable-speed system that can simplify the hydraulic system and will head off future component replacements and greatly reduce maintenance costs. 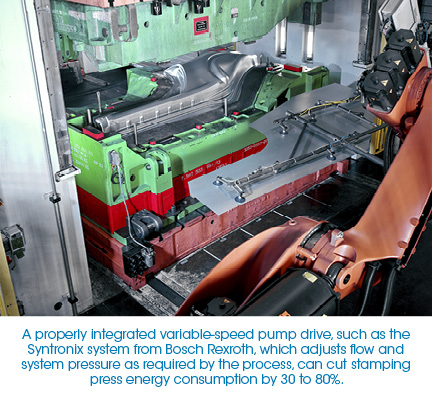 3. Evaluate hydraulic system environmental requirements. It is often assumed that noise and heat are the price to pay for a work environment needed to harness the power delivered by a hydraulic stamping press. Consider heat issues; it is worth assessing system fluid temperatures in regard to the double penalty of generating excessive pressure and/or flow and the energy needed to remove that excess heat. It is also important to factor in the expense of cooling capacity and oversized oil reservoirs.

One of the main sources of machine noise in a hydraulic press is the hydraulic pump. The sound pressure level depends on the pump’s rotational speed and operating pressure. Higher speeds will produce greater noise. Beyond pump noise, older control system designs and controllers may introduce high levels of hydraulic “shock” during the press motion cycle, which can generate sound levels as high as 80 dBA and can stress piping, valves, and seals.

The solution: A variable- speed pump can dramatically reduce heat load in the system. By eliminating throttling losses (pressure drops) using pump speed and stroke control rather than throttling valves, heat transferred into the fluid is reduced, resulting in drastically decreased or eliminated cooling requirements. Finally, variable-speed pump control results not only in lower average pump speeds, but also in smoother accelerations and decelerations with controlled transitions between force and position control. The result is a reduction in average noise emissions from the hydraulic power unit by as much as 20 dBA.

4. Assess and optimize drive and pump sizes. Typical hydraulic drive systems are oversized to deliver peak pressure and flow rather than what is optimum for real-world applications. It’s not uncommon to see motors 50% larger than the actual stamping press process requirements. Over-sizing is intended to compensate for inefficiencies in the hydraulic circuit due to pressure drops, leakage flows, etc.

For the electric motor driving the pump, proper sizing requires assessing dwell times and operation at partial and full loads to determine the actual required drive power. To determine optimal sizing of the drive components, simulation tools can be used to investigate dynamic stamping cycle variables, including pressures, flows, forces, and cylinder motion. 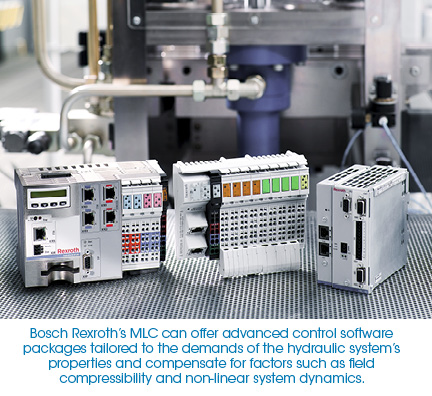 5. Improve controls for better operation and longer equipment life. Shocks transmitted through a hydraulic system can result in mechanical stress and physical wear on the press frame, fittings, pipes, connections, valves, and manifolds. This can have a negative impact on equipment life, increase downtime, and present the need for more frequent maintenance. If these conditions prevail on your stamping press, the press controls regulating pressure and flow, as well as upper-level control, should be evaluated. These physical “shocks,” even if intermittent, may indicate that the legacy control system may be hampering performance and energy efficiency of your stamping press.