Select Components for Hydraulic Systems: Calculating the Thrust for a Toggle Mechanism

Toggle mechanisms are used where high locking forces are required. Die casting machines, injection molding machines, and coining machines all make use of toggle mechanisms. There are three methods of creating toggle force. They are single lever, double-lever anchored, and double-lever scissors. Fig.1 illustrates a single-lever toggle force mechanism with a moving pivot at the rod end, allowing the cylinder rod to extend and retract in a horizontal plane. Toggle force is exerted upward in a vertical plane as the rod extends. The cap end of the cylinder is often mounted to a pivot. 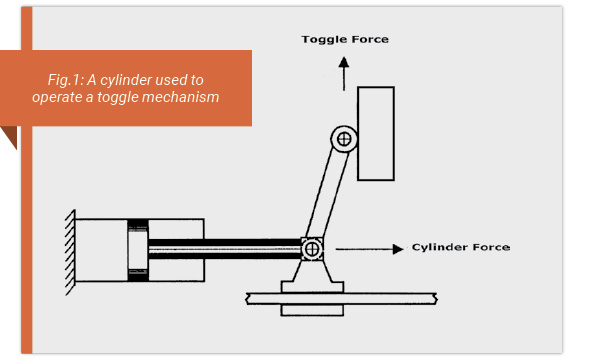 For a single-lever toggle, the upward force of the toggle can be calculated from the tangent of the angle between the lever arms and the horizontal:

Where “o” (opposite) = the vertical direction and “a” (adjacent) = the horizontal direction. The hypotenuse is equal to the length of the lever arm. Knowing remaining stroke length, the adjacent side (a) and applying the Pythagorean Theorem, the opposite side of the triangle (o) may be calculated:

Hypotenuse2 = adjacent2 + opposite2 Or:

The Pythagorean Theorem is usually written as c2 = a2 + b2, though it has been rewritten here in an attempt to clarify the concept of the toggle mechanism.

The action of a cylinder rod extending horizontally to exert a toggle force vertically is shown in Fig.2. 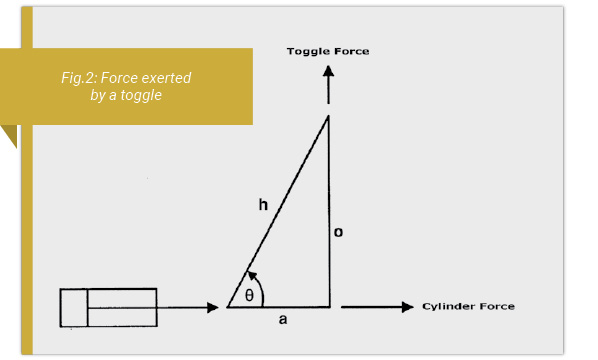 The equation representing the force developed by a single arm toggle is: 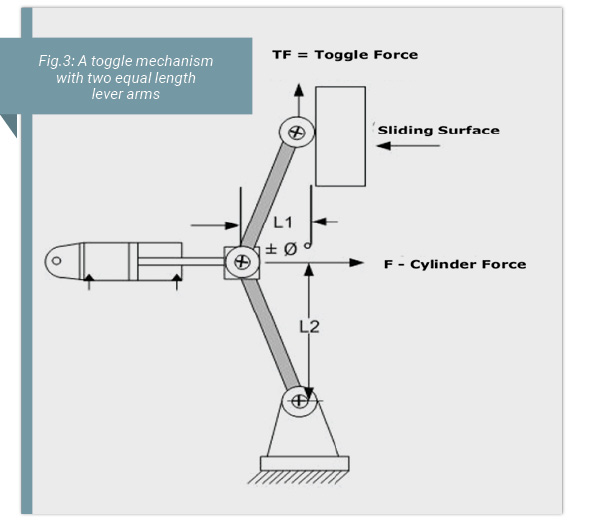 A derivative of this equation is:

2. Referring to Fig.3, A cylinder with a 3 in. bore pushes a double arm toggle with arms 12 in. long. The cylinder has a supply pressure of 2,000 psi. When dimension L1 is 8.49 in., what will be the available force from the toggle arms?