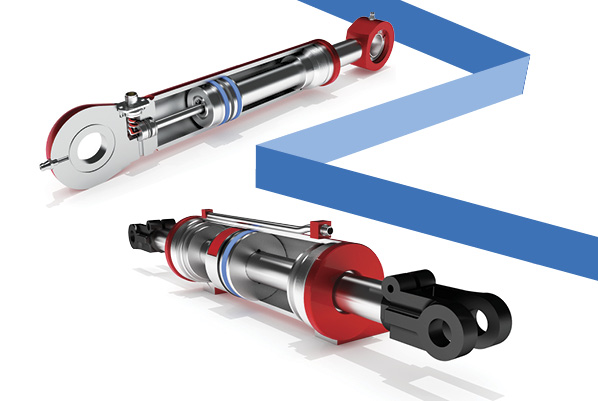 Whether in the case of autonomous driving, precision farming, or intelligent controls for construction machines, steering is becoming increasingly important. Improved manageability, introduction of various assistance functions, vehicle stability, or reduced tire wear are the key factors that keep steering at the forefront of mechanical optimization.

As soon as the mechanical connection between the steering wheel and the axle is dispensed with for any reason, it must be replaced by a closed loop control circuit, where the detection of the steering angle of the axle is required. Particularly in cases where the steering is optionally offered, an important question arises: “How can the position detection be accomplished?” The integration in the hydraulic cylinder offers an elegant solution since its interfaces remain unchanged and no changes need to be made to the comparatively complicated elements, such as the vehicle axle, which contributes to the cost and development time reduction.

The requirements for the sensors and their architecture result from the obligatory safety analysis. For this purpose, search for a range of products that meet this requirement: The sensors of the LR and LV series are already in the field in the phase of the advanced prototype testing or the series deliveries. As with the existing systems, new products remain faithful to the Hall technology, the design, and the arrangement variants (inside the piston rod or externally on the cylinder tube) reminiscent of the components known from the current production.

The LR series consists of two complete sensor circuits, which have been packaged in a common sensor tube. In the LV series, the higher-ranking sensor is monitored internally by an almost identical subordinated circuit. The signal processing within both sensor series is digital. The electrical interface can be configured with flexibility: As standard, the connection is made via a CAN-Bus interface, and the readings of the two channels and a plausibility message are outputs in a common CAN-Bus protocol. Alternatively, if desired, the output signal can be defined as current or voltage with the option of reversing one of both outputs. As a result of the increased circuit complexity, the sensor tube diameter of the LV/LR series is slightly larger than that of the standard sensors, the axial dimensions remain unchanged compared to the serial versions, so the accommodation of the sensors has usually been problem-free for the steering cylinders with the dimensions following the state of the art.

The development of the safety-relevant sensors for the steering systems is subject to special requirements, in addition to the design and process FMEA, the risk analysis, the individual development steps have to be carried out and documented according to the defined processes and criteria.

The sensors are used under extreme ambient conditions: the cylinder is usually attached to the vehicle axle, resulting in the immoderate vibration load, temperature change, and pressure pulsation. The suitability of the sensors for this application is repeatedly verified and confirmed within the framework of the validation tests during the progressive development process. The mechanical properties are checked by the vibration tests, the vibrational spectrum is chaotic or pure sinusoidal, in each case with the superimposed temperature change, in which the entire range of working temperatures is provided. The specific values for the acceleration, its density and the test time depend on the values, typical for the location of the steering cylinder, which is usually attached to the non-sprung vehicle axle, and are agreed between the vehicle manufacturer and the component supplier. In order to minimize the test duration, the time-lapse effect is used and the stress values are set accordingly higher. The transferability of the results and the limits of the test equipment must, of course, be taken into consideration.

The sensor located in the middle of the cylinder is exposed to the changing pressure.

Although the pressure during steering is comparatively low, pressure surges coming from the road are transmitted directly to the sensor structure. This strain is also simulated by the corresponding pulse test. Further on, in a sequence of the environmental tests, the stresses within the individual components are generated by different temperature gradients in order to check the structural integrity and tightness.

Within the framework of the approval procedure, the sensors have been issued with the UN / ECE R10 certificate, which confirms the compliance of the prescribed requirements with respect to the immunity against radiated and conducted disturbances, as well as the requirements for the limitation of unwanted radiated and conducted emissions and is mandatory for the road service approval.

In production process, following the relevant automotive regulations, the greatest emphasis is placed on the uniform practice of the supply chain, the agreed documentation and labeling in order to meet all requirements for the traceability.

At the end of the manufacturing process, all sensors are proven for reliability in a high-temperature cycling test. The test extends over several hours and uses the established correlation between the ambient temperature and the failure rate. The test is carried out under operating conditions, and the communication with each unique sensor is recorded and logged. After the test, each sensor receives a DMC tag with an individual part number.

Consciously, there were no absolute figures called in this article, essentially to protect the experience of our partners. The tests, which are based on the specifications of several manufacturers, however, allow the conclusion that the solutions developed are well suited for the broad market campaign. As described above, based on the experience gained during the prior development projects, the running mass production of the sensors and the accomplished maturity of the products, these new sensors offers potential customers their support and expertise as part of common development projects of the customer tailored position sensors for the demanding road applications, as well as the high product reliability in the mass production.