Supersize Me: How a Hydraulic Cylinder Amplifies Its Fluid

There are many parallels between electrical and hydraulic systems, but did you know hydraulic cylinders can act like amplifiers? There are two ways that a double-acting single-rod hydraulic cylinder can amplify the fluid that operates it, and designers can create systems to accommodate each of these very different amplifications.

There are many analogies that describe electrical and fluid power components. For example, switches are like valves and resistors are like orifices, but amplifiers are not mentioned. Electronic transistors are amplifiers used to raise the strength of a weak signal. However, in fluid power we may already have a strong signal. Raising the strength of an already strong signal can cause damage to components in other areas. How can you avoid these problems?

A ratio of areas

Starting with the basics, we know that pressure inside a cylinder is equal on all internal surfaces, as shown in figure 1. Pressure on the inside of the cylinder tube is important but not relevant in this article. Likewise, we’ll ignore pressure on the rod for the sake of this discussion.

To determine the areas of concern, use the following equations.

The area on the base side is simple to calculate. It is a function of one variable, the bore, and a constant, pi. This is one of the first things taught to a new fluid power student. After a while, fluid power professionals often combine the constants to simplify the equation.

Turning attention to the opposite side of the piston, we know that the surface area on the rod side of the piston is always less than the bore side because the rod removes some area (see figure 2). The remaining area is sometimes called the annular area and can be calculated as follows.

Equation 3 can be simplified by combining constants, as in equation 2.

To determine the area ratio of a cylinder (AR), sometimes called the cylinder ratio, divide the area of the bore by the annular area. This number is always greater than one and can be very large for a cylinder with a large rod diameter.

The constant 0.7854 appears in the numerator and denominator and therefore cancels. This simplifies equation 5 to: 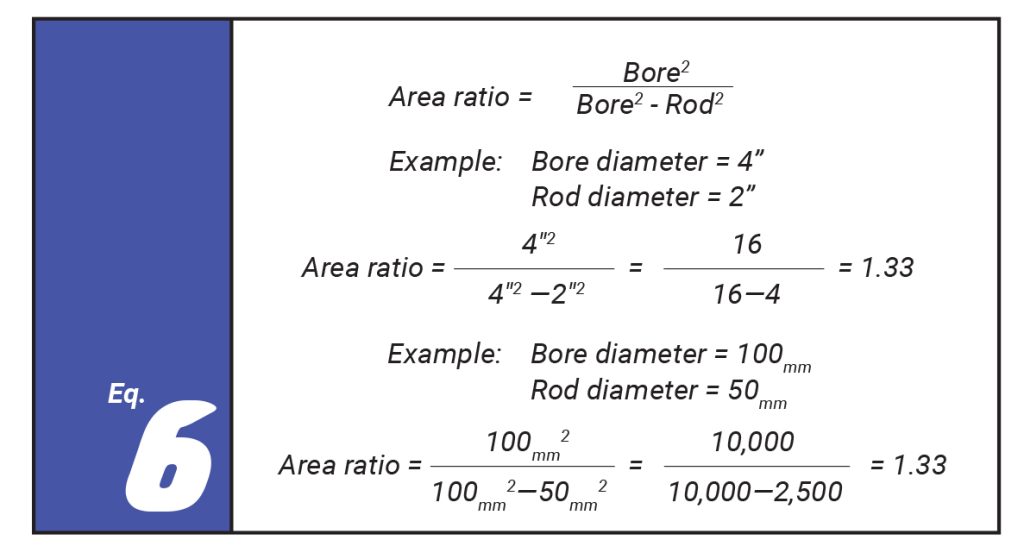 Note that area ratio is unitless and can be used to calculate flow and pressure amplification.

Double-acting single-rod hydraulic cylinders produce flow amplification when they retract because the volume of fluid in the base end is greater than the volume of fluid in the rod end. When the cylinder retracts, both sides of the piston move the same amount. So each unit of piston movement displaces a larger amount of fluid on the base side because the area is greater on that side of the piston. Base-port return flow can be considerably larger than the pump flow and should be considered when sizing return lines and selecting a return filter.

The area ratio results from equation 6 are used to calculate flow amplification. For a single-rod cylinder, flow from the base port is amplified by the area ratio. 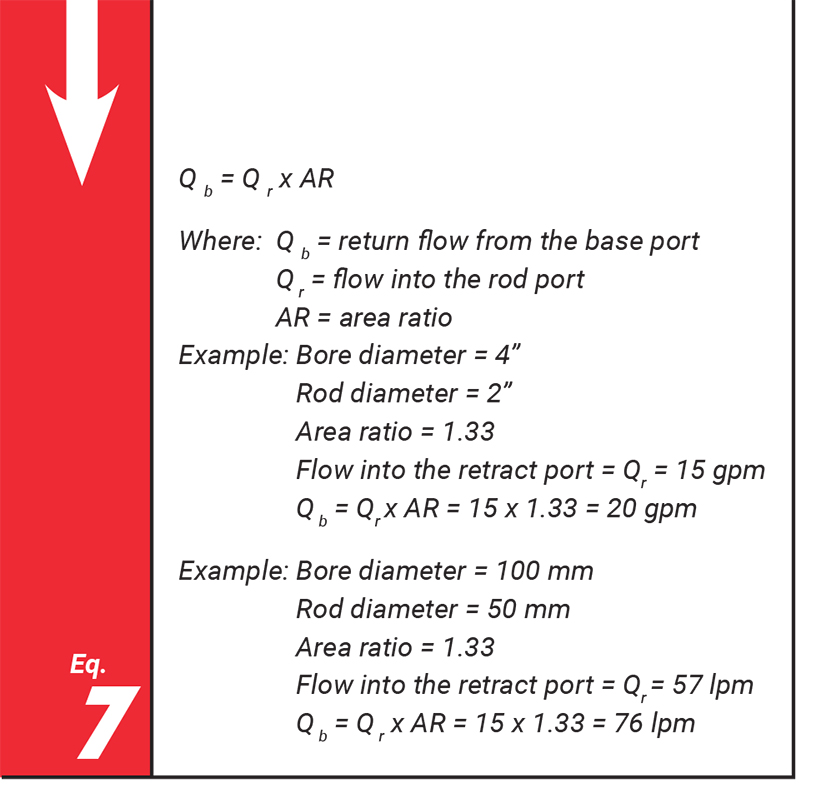 If the return filter was selected to match pump flow without considering flow amplification, internal bypass valves in the filter housing or element could open with every return stroke, allowing contaminants to avoid filtration and re-enter the system.

Likewise, undersized return lines increase pressure drop, diminishing the amount of work a cylinder can perform while retracting. Resistance to flow or back pressure on the base port decreases the cylinder retract force, which takes us to our next topic.

Area ratio is also used in another important aspect of hydraulic system design. Area ratio is mathematically related to pressure amplification, sometimes called pressure intensification, and can be used to an advantage, if that is the intention. Hydraulic intensifiers are often used in applications that require elevated pressures and small displacements, but they are beyond the scope of this article.

Consider what happens when extending a hydraulic cylinder as fluid enters the base port, advancing the piston, performing work, and simultaneously forcing fluid out of the rod port. If the rod port has a significant flow restriction, for example from a flow control valve, pressure can increase potentially to dangerous levels, as shown below.

The amplified pressure in a rod port is easily calculated using the area ratio from equation 6. 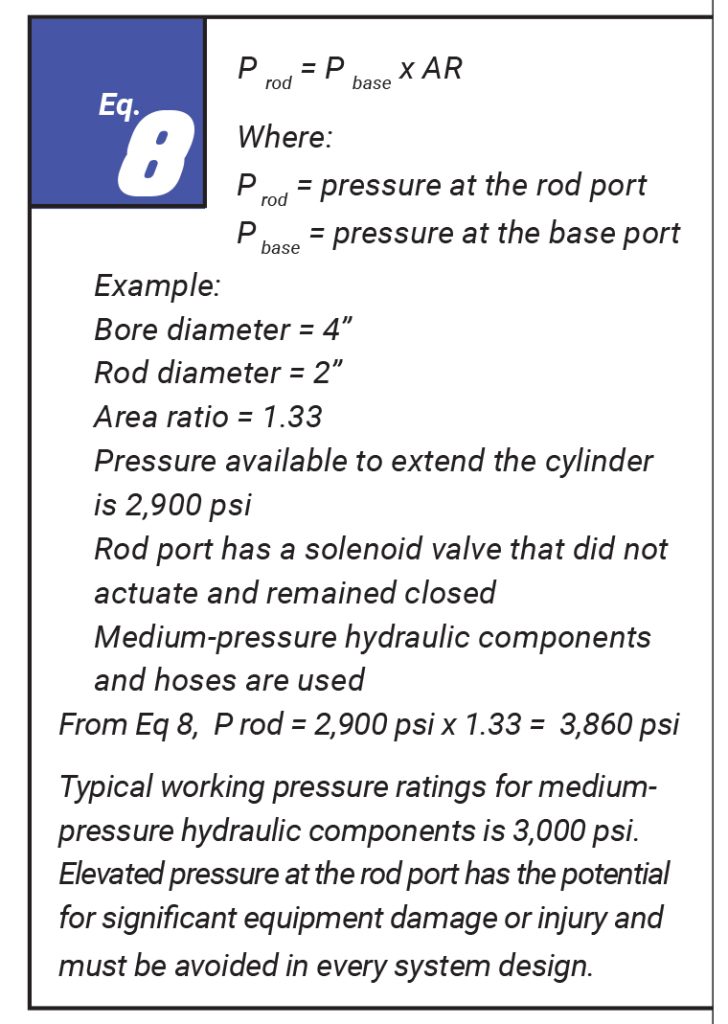 In pneumatics, flow controls are often used on rod ports of cylinders to control the speed of the piston. As the expression goes, “When in doubt, meter out,” but pneumatic systems can tolerate pressure amplifications, considering they begin with lower pressures. However, installing a flow control on a hydraulic cylinder rod port can cause pressure increases beyond rated levels, potentially causing damage or failure of a component.

Hydraulic directional control valves take pressure amplification into account. Careful study of directional control valves shows that the path to tank opens before the pressure port opens. Another hydraulic component sometimes used in a return line is the counterbalance valve, also known as an overcenter valve. These valves include a pilot circuit to open the path to tank similar to a relief valve to limit the pressures to acceptable levels.

Hydraulic system designers should consider cylinder amplification when selecting and sizing components. Ignoring area ratio calculations can cause flow problems in the return conductors and filters. Ignoring pressure amplification can have safety consequences, such as manifold cracks or hose failures.