Seal failure is inevitable, and seals are 99% less likely to be on the inspection list. If seals are in an inspection program, then it has been determined that these seals are critical in your particular application. A critical seal would be one that if failure occurs would create a hazard for personnel and/or the public. In most cases where components have to be disassembled for inspection, seals should be replaced. The cost of hydraulic seals is pennies compared to the time and resources put into disassembling components to merely inspect the seals.

Seals deteriorate over time, and it may not be obvious by inspection to determine the condition of the seal without laboratory analysis.

Critical in regards to safety would include components such as pumps, valves, and actuator seals. The seals in these critical components would be utilized in aircraft, amusement park rides, and elevating devices. Failure of a seal in these critical areas could lead to injury and death. If a critical seal failure occurs in an aircraft, survival would be less likely.
Risk is reduced by a maintenance plan where critical seals are replaced after so many service hours or a combination of non-service hours. Seals that are not in service for long periods can deteriorate; therefore, it cannot be assumed that seals will last longer if not in use.

To avoid any thought of surviving hydraulic seal failures, consider how hydraulic seals and safety are closely related. For more about seal safety, refer to the HSAC High Risk Maintenance-Level course.

A thermoplastic hose does not have metal wire reinforcement. This type of hose has been designed as a non-conductive hose, meaning it will not transmit or conduct electricity and is commonly used on equipment exposed to high voltage. 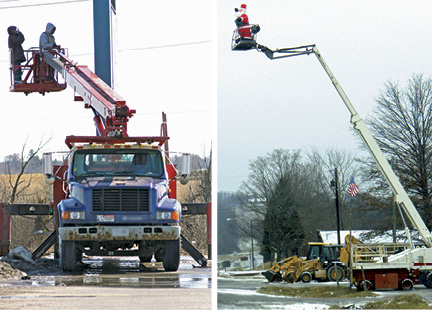 Typically the non-conductive hose is orange in color, and it has the SAE and DIN standard information printed on it. If you have equipment requiring non-conductive booms, be sure to inspect for non-conductive hydraulic hoses and also train personnel on this subject.

The following question was received from an entertainment company.

Question: We use scissor lifts for various things in our business, such as elevating stagehands to access trussing and to support lighting and sound equipment. My concern is if a hydraulic hose breaks, will the lift drop or descend, especially when we have wiring or props passing from a lift to a platform or truss during a show. I read about our lifts having a velocity fuse to prevent them from dropping.

Answer: First and foremost, all equipment should be operated within the safety guidelines provided by the manufacturer; I would strongly recommend that you direct any inquiries about the safe operation of specific equipment and applications to the manufacturer in question. To prevent injury, there are many more considerations and requirements. Should the velocity fuse be activated, always refer to the manufacturer and direct safety inquiries to them about instructions for manually lowering lifts and resetting fuses.

I will begin by describing how a velocity fuse functions. There are many manufacturers of velocity fuses, and they are used in many elevating devices, including forklifts or any device used in a critical application. 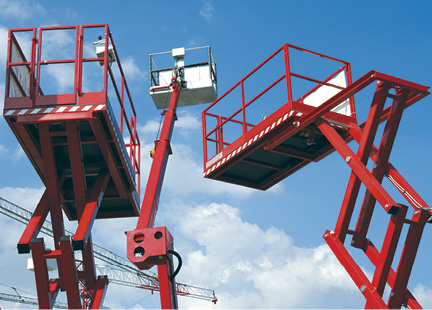 The velocity fuse is designed to stop hydraulic fluid, which is being used to hold a hydraulic cylinder’s load – in your case, the elevated lift should a hydraulic hose, tube, or seal rupture. When a hydraulic fluid line breaks, the fuse detects this and closes blocking fluid from exiting through the break. This is a very general description. The detection is a sudden change in pressure or flow. When a rupture occurs, the fluid holding the load is under pressure and this pressure forces the fluid to the breach. The sudden fluid pressure drop or the velocity of the fluid traveling towards the breach signals the fuse to close. The trigger occurs at approximately 30% over the normal function flow rate. Do not rest assured the velocity fuse will work under all failure circumstances. The velocity fuse will only function within certain flow and pressure parameters. For example, it will be ineffective against slow leaks because the velocity of the fluid is not high enough to activate the fuse. In some situations, the fuse could close when it is not supposed to. An example is a change in fluid viscosity from cold conditions.

Lifts and elevating devices play a large role in arts and entertainment, and each of your applications must consider the risks should a lift lower or fail. For example, if a prop is connected to a lift and a truss or platform and the lift lowers slowly from a failed hose or seal, would the lift pull the truss and platform down with it? This could pose a very dangerous situation!

A velocity fuse is not completely reliable and will not function in all failure conditions. So yes, it is possible that your lift could drop or descend even if it has a velocity fuse installed.

The above articles have been reprinted with permission. Images courtesy of Hydraulic Safety Authority of Canada, Inc.

For more information: The mission of Hydraulic Safety Authority of Canada Inc. (HSAC) is to provide proactive health and safety awareness programs specific to hydraulics systems and components. These programs provide a guideline for companies to follow as they show the necessary due diligence required for providing a safe work environment and improving their existing health and safety systems. Contact by phone: 416-363-7272; email: info@hsac.ca; web: www.hsac.com.