The Effects of Pressure Compensated Components on Control Systems

To maintain a relatively constant flow to an actuator regardless of variations in inlet or load pressures, a pressure compensated flow control can be used to achieve and maintain a somewhat regulated speed. This type of control typically consists of a normally open pressure control (essentially a pressure reducing valve) in series with a fixed or manually variable orifice (flow control). In this application, the normally open pressure control is commonly known as a hydrostat and can be located either upstream or downstream of the flow control. A 100-150 psi bias spring (typically) holds the hydrostat in the normally open position. See the figure below. With the hydrostat sensing the pressure both upstream and downstream of the flow control and therefore both supply and load pressure, a constant pressure differential equal to the value of the bias spring can be maintained, regardless of changes in the sensed pressures. By maintaining a constant pressure differential, a regulated flow relative to the setting of the flow control valve can be obtained. Assuming that a proportional directional valve is essentially an electrically adjusted flow control, it can be seen that a hydrostat can regulate flow is a similar manner.

Although hydrostats used for pressure compensation to regulate flow can provide for a relatively constant actuator speed, their application does not come without an impact on performance, potential cost and physical size. Since a hydrostat only allows for a pressure differential equal to the bias spring to be realized across the proportional valve, flow for a particular proportional valve size will be limited versus being non-compensated. This means that a larger valve than otherwise required may be necessary to pass the specified flow. Larger valves have bigger spools with more mass and require more solenoid force to shift against heavier centering springs. They require more time to move and are not as quick to respond to an input signal as a smaller valve flowing at a higher pressure differential. Should the flow rates be high enough to dictate the need for a pilot operated, two stage valve, the pilot valve itself will contribute to the overall response time of the proportional valve. Smaller valves respond faster and are more sensitive to changes in input signals thereby controlling output flow. 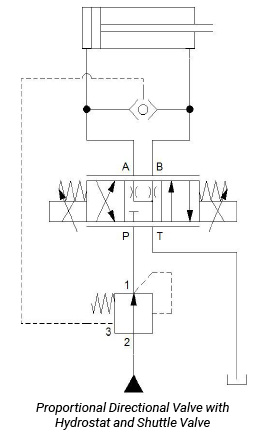 When rapid response and high accuracy are of concern (as typically is the case in industrial systems), one must exercise caution in using pressure compensation for flow regulation in systems that utilize closed loop feedback control. This is particularly the case in the fast acceleration of high mass loads to a target position or velocity. It is also true if the mechanical system has an inherently low natural frequency where the hydrostat is yet another spring-mass system that can introduce disturbances as the feedback loop modulates the proportional valve to target the system set point.

Another area of concern is with tractive (overrunning) cylinder loads that are controlled with a proportional valve having a symmetrical (equal flow area) spool. If the cylinder has a large diameter rod relative to the piston diameter, the resulting high differential area requires the proportional valve to be significantly restricted to maintain control of the load. This tends to cause cavitation in the piston end of the cylinder and may require a different type of proportional valve spool or additional circuitry to prevent potential stability issues. See the text “Know How to Size the Proportional Valve” earlier in this section.

When properly applied, pressure compensating hydrostats can be a practical means regulating flow but are most effective in open loop (non-feedback) systems.

Pressure compensating flow controls are most effective where?

a. In high response and high accuracy systems

The correct answer is b.