Cylinders can fail for a number of reasons, from wrong specifications to operator error. However, in this day and age with a number of engineering tools available to help reduce spec errors and strong expertise within the fluid power industry, one of the leading causes of cylinder failure is still seals. Whether the seals are sized wrong, incorrect material is spec’d, or just installed wrong, error in sealing can have a major effect on the entire cylinder operation.

Cylinder operation is based on precise fluid pressure to both sides of the piston. If a seal breaks down and allows fluid to leak from one side of the piston to the other, or out of the cylinder all together, the pressures change, and your cylinder will no longer operate as intended. With over 100 years in the fluid power industry, Parker engineers have seen countless examples of how seal issues can escalate into much larger problems for a hydraulic system.

Seal hardening is exactly what it sounds like. The seal can solidify and dry out, making it hard and brittle. The most common reason for this is exposure to temperatures that are too high for the seal to handle. Be warned this is not just ambient temperature around the cylinder. The piston itself can generate substantial heat through motion and friction, causing wear to the seal. This heat can be monitored by measuring the temperature of the hydraulic fluid entering and exiting the cylinder. There are several methods to combat hardening, including insulation and cooling, but the best way is to use materials that are suited for the temperature requirements for your application.

While cylinder operation may seem simple on its surface, it takes precise installation of several parts to ensure that the cylinder will operate correctly for its entire life cycle. The seals are an integral part of this, and if they are misaligned it can allow hydraulic fluid to leak past the seals. This can cause problems in cylinder operation that lead to major failures and result in costly downtime. 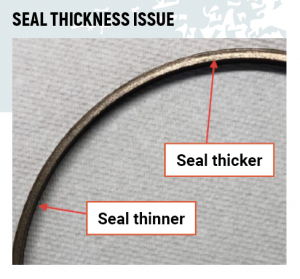 Erosion can occur from three main sources. One cause is the general wear from the normal back-and-forth motion of the cylinder. Another source of erosion is pressure buildup. If the seal used in a cylinder is not specified to the appropriate pressure, pressure can get trapped underneath the seal and push it against the cylinder body, causing wear.

Recently, Parker cylinder engineers identified an issue of a piston seal getting blow by and causing the cylinder to drift in a hydraulic press application. They were able to identify that the seal thickness varied from about 1/32 of an inch under to almost 1/16 of an inch under print dimensions and that there was a slight amount of extrusion on the side of the seal facing toward the cap end of the cylinder. This would indicate higher pressure on the rod end of the cylinder that was getting trapped underneath the seal and pushing it against the cylinder body, causing wear. Parker recommended switching from the KP piston seal to the HP, which is made of polyurethane, a tougher material, with reliefs molded into the sides of the seal to allow venting excess pressure underneath. This helped the customer identify an issue early that could have grown into a much bigger problem.

The Parker HP energized bidirectional piston seal improves on the low friction and long wear of lipseals by including excellent low-pressure sealing performance. Specially formulated polyurethane is long wearing and abrasion resistant with running friction comparable to lipseals. An O-ring energizer ensures virtually zero leakage in low-pressure applications. Also, pressure trapping that can result in energized lipseals is not possible with a single energized seal.

Parker’s HP piston seal is an excellent choice for most industrial applications operating with mineral-based hydraulic oil and is available in seal classes 1 and 4.

When combined with a fluorocarbon energizing ring, the Parker KP seal is rated for 400° F and will increase service intervals in high-temperature applications when compared to fluorocarbon lipseals.

By combining the Parker KP seal with other energizer O-ring compounds and wear ring materials, the KP seal offers excellent service in all seal-class environments.

The final main source of erosion is use with an incompatible fluid. Hydraulic systems use a relatively incompressible fluid, and, given the application environment, different types of hydraulic fluids may be required. For example, use of synthetic hydraulic fluid may be used for highly flammable applications. That is why you must keep in mind that not every seal will work with every application. If your job calls for a particular type of hydraulic fluid, evaluate the compatibility of the seal material to the fluid to ensure the seal will withstand the chemical properties of that fluid. 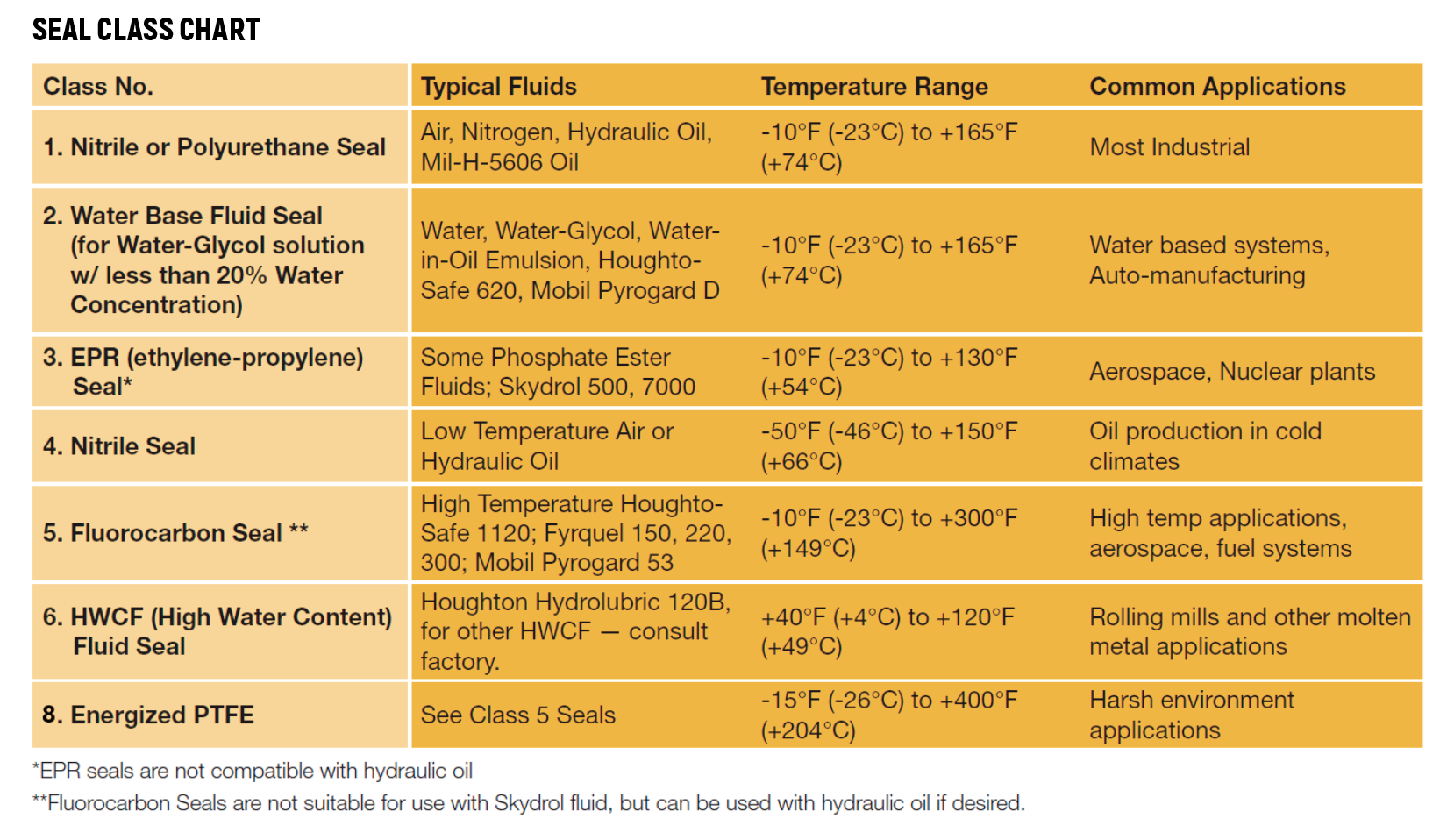 The Parker Sealing Technology Bulletin provides information on a variety of actuation sealing options and can help you choose the right seal for your application.