Under Pressure: Gauging the History of an Indispensable Instrument

Since being patented by Eugene Bourdon in 1849, the Bourdon tube pressure gauge has played a crucial role in mechanical pressure systems. Although the basic components – Bourdon tube, socket, movement, and indication – have remained the same, subtle changes in the gauge’s design have allowed it to evolve with industry’s changing requirements.

The primary role of a Bourdon tube pressure gauge is to provide local indication of how a process is performing. By checking the measurement of the pressure in the system, operators or maintenance personnel can quickly determine if equipment is operating at optimal efficiency. 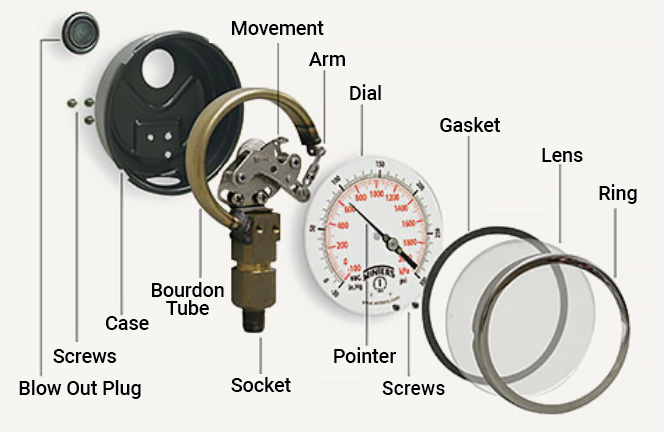 A drop in pressure is an indication of leakage in the system, while a pressure spike can indicate a blockage, possibly in a filter or valve. While there are other ways to identify these problems, a pressure gauge usually provides the first hint of an issue. The gauge’s value comes from its ability to show changes in system pressure, allowing technicians, engineers, and operators to decide if there is, in fact, an issue. A preventative-maintenance shutdown can be scheduled and an unplanned one for a costly repair avoided. 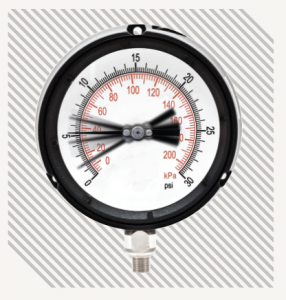 Early pressure gauges were essential in many applications, but their effectiveness was hindered by the presence of vibration – the shaking of machinery – or pulsation – continuous pressure spikes. Vibration and pulsation in the system cause the pointer to bounce or shake rapidly, making it impossible to get an accurate reading of system pressure and nullifying the gauge’s effectiveness. The gauge’s increased cycling movement causes premature wear, frequently requiring the gauge to be replaced.

Manufacturers began offering liquid-filled versions of pressure gauges for applications with excessive amounts of vibration and pulsation. It is a standard gauge in which the case is filled with a viscous liquid. The liquid selected for the fill depends on process and ambient temperatures and its chemical compatibility with the process media. Some common fill fluids include glycerin, a glycerin-water mix, silicone, and halocarbon.

By filling the case with liquid, manufacturers can mitigate the effects of vibration and pulsation. The liquid provides hydrostatic drag, i.e., resistance, against continuous movement. The fluid also acts as a lubricant for the gauge’s internal components, eliminating the threat of premature wear and reducing the probability of damage.

Liquid-filled pressure gauges solve issues of vibration and pulsation but introduce other problems. The main issue involves the possibility of liquid leaking from the gauge.

While being shipped or after being installed, there is the potential for liquid to leak out. This decreases the gauge’s ability to dampen vibration, negating its effectiveness. Also, depending on how much liquid has leaked from the gauge, the meniscus can be resting at a level that makes the gauge difficult to read. 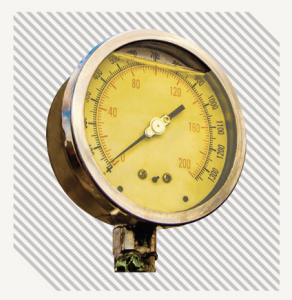 The final and most serious leak-related problem occurs when the gauge is installed. The liquid that ends up on the floor is extremely slippery, resulting in a hazardous working environment. This potential can prevent liquid-filled gauges from being installed in facilities with strict safety guidelines.

If a liquid-filled gauge needs servicing or recalibration, the process is more involved than with a dry gauge. The gauge must first be emptied and dried. Once it has been serviced or recalibrated, the gauge needs to be refilled before being reinstalled, which increases turnaround time.

The fill fluid added to a pressure gauge also affects the temperatures in which it can operate. Glycerin, which is often standard in liquid-filled gauges, has a temperature range of approximately -20°C to 65°C (-4°F to 150°F). For temperatures outside that range, gauges require a specialized fluid that can be more expensive and result in longer delivery times.

Discoloration is another external environment issue associated with liquid-filling. Gauges installed in locations with prolonged exposure to sunlight can experience discolored liquid. So can gauges exposed to ambient or process media heat above specifications. Discoloration makes it difficult to read the pressure.

Furthermore, a filled gauge, regardless of size, is twice the weight of a dry gauge. The added weight will result in higher transportation costs and fuel consumption. 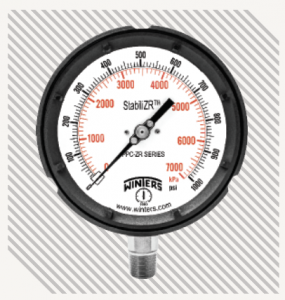 StabiliZR gauges are engineered with a pointer shaft that extends out the back of the movement with two paddles that are added to the shaft. This extended portion of the shaft is encased by a cap filled with dampening compound. The cap is then permanently sealed, preventing the dampening compound from leaking. The gauge will always be easy to read, and there is no risk of slipping caused by leaked fill fluid. Servicing and calibration are completed faster because there is no need to drain, dry, and then refill the gauge. 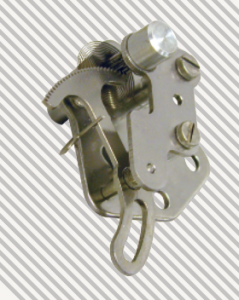 Because the case isn’t filled, StabiliZR gauges can operate over a wider range of temperatures, in some cases -40°C to 120°C (-40°F to 250°F). It can also be installed in direct sunlight without the risk of discolored fill fluid obstructing reading of the gauge.

Pressure gauges are often overlooked in a process. Their cost relative to other components can relegate them to an afterthought when designing, operating, and maintaining equipment. But the gauge’s role as an indicator of efficiency or potential failure makes it critical to the overall health of a process. Its journey from dry to liquid-filled to StabiliZR represents the continuous improvement of the pressure gauge as it adapts to industry’s changing demands.