We are conditioned to think a variable displacement pump is more efficient than its fixed displacement counterpart. As a generalization this is true, but like most things in hydraulics, it depends. It largely depends on the type of control used and the circuit configuration when the pump is on standby.

To expand on the latter, consider this question I was asked to adjudicate on recently:

I state that a hydraulic system with a fixed displacement pump and a heat exchanger is better because the heat in the oil is primarily due to “Load” = oil is working. The heat exchanger will cool the reserve oil in the tank so that when the HOT oil comes back to tank it will mix with the cooler oil for much more stable oil heat management.

Neither statement is strictly correct. But this one is the most incorrect:

“A variable displacement pump solves this problem as it does not move any oil when at rest = no heat = no need for a heat exchanger.”

The need for a heat exchanger usually has very little to do with whether or not oil circulates around the system when it’s unloaded. It has much more to do with how efficient the hydraulic system is under load and its duty cycle, that is, how many minutes out of every hour it operates under (high) load. There are plenty of hydraulic systems around with variable pumps that have and need a BIG heat exchanger.

And depending on its type of control, a variable pump on standby can be a more effective oil heater than an unloaded fixed displacement pump. This is best illustrated with an example:

A few years ago, I was called out to a problem on a winch driven by a Hagglunds Viking motor. The shear pins in the distributor coupling of the Viking motor were having to be replaced regularly. These motors are sensitive to thermal shock. If hot oil is directed to a cold motor, the distributor expands and interferes in its bore – shearing the pins in the coupling. This prevents the distributor from being damaged. But when it happens, it’s a major inconvenience.

The circuit was simple enough. It comprised a diesel engine driven, pressure-compensated piston-pump, a directional control valve, and the Viking motor (Fig. 1). 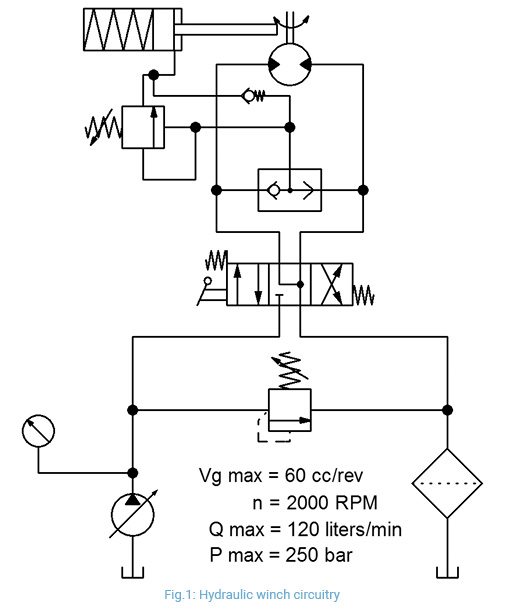 The trouble was, if the operator started the hydraulic power unit but didn’t begin to use the winch straight away, the system just sat there at a pressure of 250 bar – the setting of the pressure compensator on the variable pump. The tank volume was only about 60 liters and so the internal leakage from the pump and spool valve at 250 bar was doing a dandy job of heating the oil in the relative small reservoir.

Fig. 2 shows a simulation of the circuit in which, for analytical purposes, orifices have been installed to represent internal leakage in the pump and directional control valve with the system at standby. Theoretical heat-load is 2.9 kW (254 x 6.8 / 600). 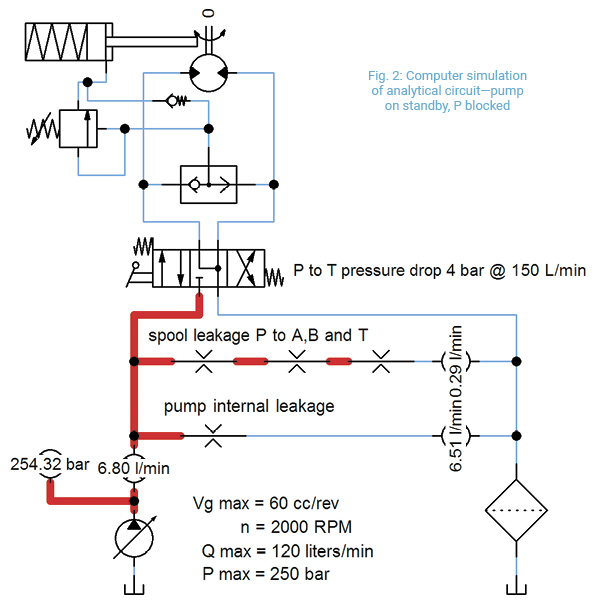 As a result, if the operator waited long enough before operating the winch, the oil was hot enough to thermal shock the Viking motor. The typical fix for this problem is to flush the case of the Viking motor. The theory is, if the case of the motor is flushed with oil from the working (hot) part of the system, the motor won’t be at a substantially different temperature when hot oil is directed to the motor’s service ports. This is fine in theory, but if the oil in the working part of the system is heating up faster than the case-flush can warm up the motor, thermal shock and shearing of the distributor coupling can still occur. So while necessary, it was only part of the solution in this case.

The ideal solution would have been to switch to load-sensing control. This would mean when the winch wasn’t being used, there would still be no flow from the variable pump (other than leakage losses) but the standby pressure would be 25 bar instead of 250!

That wasn’t practical in this case, so I removed the high-pressure carry-over plug from the directional control valve – to make it open center. Fig. 3 shows a simulation of the same analytical circuit with the system on standby but with the directional control valve switched to open center. Theoretical heat-load now is 1 kW (5.2 x 120 / 600), about a third of what it was with the pump sitting on its pressure compensator setting. And this solved the problem. 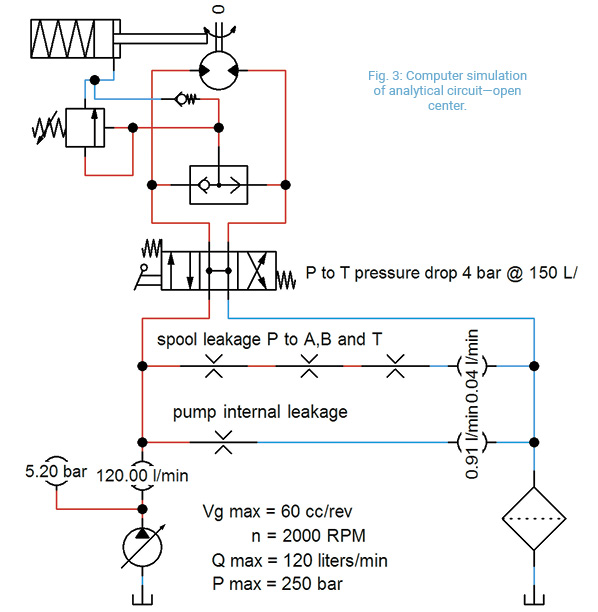 The moral of this story is, a variable displacement pump is definitely NOT a substitute for a heat exchanger – and if it is pressure compensated, the system may actually require a bigger heat exchanger than it would otherwise!