The story line has been repeated endless times: maintenance personnel have to deal with directional control valves that stop working far sooner than they should, slowing down or stopping production. The valves could be located in a harsh environment, like a tire plant or a foundry. Or it could be that the factory just routinely has poor quality “house” compressed air.

The Rexroth Ceram™ valve, by using ceramic plates for basic sealing, can tolerate environmental conditions, such as corrosion, dust, dirt, and sand, that end up in an air line, far better than traditional spool design valves. These contaminants accelerate wear of rubber seals in traditional packed-spool valves and cause failure of lapped spool valves by getting trapped in the extremely close clearances. 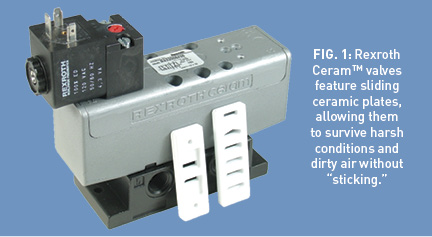 The ceramic plates in the valve—one static and one dynamic—shrug off contaminants. The plates are made of extremely hard aluminum oxide (rating approximately 9 on the Mohs hardness scale, which rates diamond as 10). The plates are ground extremely flat – within a few light bands – and form a nearly perfect seal. Slots in the plates direct air flow as the top plate is shifted, wiping them clean by cutting through contaminates that destroy ordinary valves. The plates are guaranteed for the life of the valve.

Another frequent source of downtime and annoyance are air valves “sticking.” Sticking most often occurs after a machine has not been used for a period of time, thus the term “Monday morning blues” when production is delayed while someone goes around tapping air valves with a wrench or hammer to get them unstuck. The cause is rubber seals sticking from a “varnishing” effect of airline contaminates on the seals. The Ceram valves solve this downtime problem because the ceramic plates don’t stick.

A mechanic at a paper mill shared his story. The very hot, wet environment was causing air valves to fail on the average of three weeks to a month, costing the mill a lot of money in lost production time. The valves were used to oscillate cleaning doctors to keep the rolls clean. The first Ceram™ valve he tried was a big success: “It has run for five and one-half years, 24 hours a day, 365 days a year, cycling every eight seconds, four seconds off – four seconds energized. We are down for routine maintenance a few times a year, but otherwise it just keeps on ticking. Almost entirely now on all upgrades and new installations, we use nothing but Rexroth Ceram valves knowing that we are installing dependability.”

Engineers at a tire manufacturing facility were faced with valves failing in as little as six months. A hot, dirty environment combined with contaminates, such as carbon black, were destroying the o-ring seals in their air valves and costing them money. A switch to the Ceram valves now mean their air valves last for years instead of months. 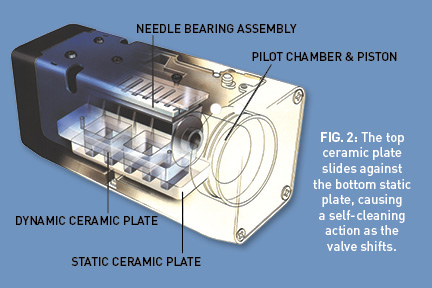 Over the years, foundries have been a constant source of the valve’s success for obvious reasons. For example, a manufacturer of gray iron castings uses pneumatically actuated wire brushes to remove sand from molds after heat and moisture have baked the sand to the molds. Sand was finding its way into the air valves and destroying the seals. Valves that cycled every three seconds were lasting only two weeks to two months, causing a constant source of downtime. A switch to Ceram valves solved the problem because the ceramic plates are harder than sand and self-cleaning. The initial valves used were still in use a year and a half later without failure when the application success was shared.

Steel mills, concrete batching plants, glass plants, feed mills, rubber, and plastics are all examples of other industries where the valves have solved premature air valve failure. However, most of these valves are sold in industries considered more “normal” in terms of the environment conditions. That’s because they work great there, also. Any plant can have dirty air if airline systems are not properly maintained, and customers have found that installing the valves save them from untimely work stoppages. By being available in ISO sizes I through IV, with ratings from 1.1 Cv to 7.5 Cv, the valves cover a very wide range of applications. ISO standard 5599-1 subbases feature ¼” to 1″ NPT or ISO G (BSPP) port options with many accessories, such as speed controls and regulators. Working pressure is 0 to 150 psi (can be externally piloted for low-pressure or vacuum applications), and the valves can operate with or without line lubrication. A large variety of valve operators, including solenoid and air pilot choices, explosion-proof, and intrinsically safe choices, etc., allow the valve to provide millions of trouble-free cycles for multitudes of applications in industry. 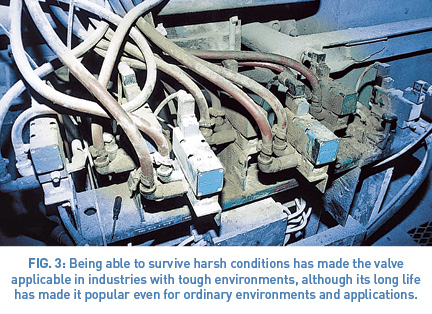 The Ceram valve, with its sliding ceramic plate design, has proven to be an instant cost savings in thousands of industrial applications by reducing maintenance and downtime costs.