The global economy remains robust, even as many of the data points showed signs of softening in March. For its part, the Organisation for Economic Co-operation and Development (OECD) said that worldwide real GDP growth should rise from 3.7 percent in 2017 to 3.9 percent in both 2018 and 2019, according to its interim outlook in March. That reflects slight improvements from the OECD’s prediction in December. More importantly, it cited healthy gains in business and consumer confidence, employment, investment and global trade volumes, especially as the economic outlook has continued to strengthen. With that said, policy uncertainties have escalated, and pricing pressures have started to accelerate. This could make the process of normalization by central banks more difficult.

In the latest data, the global economy has shown signs of softening, even as the manufacturing sector remains healthy overall, especially relative to the headwinds that were pervasive a few years ago.  Along those lines, the J.P. Morgan Global Manufacturing PMI decreased from 54.1 in February to 53.4 in March, the lowest level since October. The hiring pace pulled back marginally from the gain in February, which was the best since March 2011. Input prices decelerated slightly in March, but that index has been at least 60—signifying robust growth—for seven consecutive months. Despite the easing in other measures, manufacturing leaders remain very upbeat in their global outlook for the next six months, with that index at a level not seen since February 2015.

In March, all but one of the top-20 markets for U.S.-manufactured goods expanded, illustrating the strength of the international economy once again. (There is no manufacturing PMI for comparison purposes for Belgium, which is our 12th-largest trading partner.) The lone market in contraction was South Korea, which has been weak for much of the past year, particularly as the economy has grappled with political uncertainties. 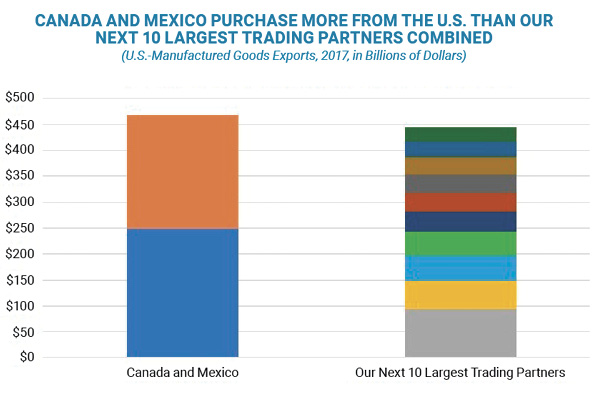 For its part, U.S.-manufactured goods exports rebounded strongly in 2017—a nice turnaround after global economic weaknesses in the two prior years—and a trend that has continued into 2018. U.S.-manufactured goods exports totaled $175.22 billion in January and February of this year, up 4.99 percent from the year-to-date total of $166.89 billion in 2017. Moreover, U.S.-manufactured goods to our top-two trading partners—Canada and Mexico—also improved through the first two months of this year relative to last year. In general, trade volumes have risen significantly over the past year as the overall health of the global economy has strengthened. Nonetheless, the U.S. trade deficit rose from $56.67 billion in January to $57.59 billion in February, the highest level since October 2008, as the gain in goods imports outstripped the increase in goods exports.

In addition to improvements in the global economy, the weaker dollar in 2017 helped to spur more export growth, which benefited manufacturers in the United States. In fact, the trade-weighted U.S. dollar index against major currencies has declined 9.9 percent since the end of 2016. Yet, more recently, the U.S. dollar has trended higher, up 1.9 percent since January 25. In addition, the dollar continues to be stronger relative to where it was on June 30, 2014, up 13.8 percent since then.

Talks to modernize the North American Free Trade Agreement (NAFTA) are seeking to conclude in the coming weeks, with trade ministers participating in ongoing discussions. The administration is moving forward on proposed tariffs and other measures to address intellectual property (IP) theft and other challenges in U.S.–China commercial relations and has modified actions with respect to steel and aluminum tariffs. The Trump administration has sought the renewal of Trade Promotion Authority (TPA), and Congress has reauthorized the Generalized System of Preferences (GSP) program. Manufacturers are still pushing for passage of the Miscellaneous Tariff Bill (MTB).