Finding Hidden Innovators: da Vinci, Edison, and the Rest of Us 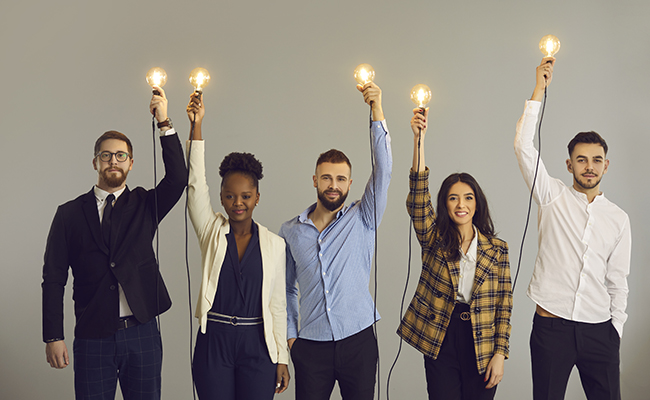 Most people who work in a corporate environment are familiar with some type of personal style indicator, such as the Meyers Briggs Type Indicator, Strengths Finder, DISC profile, and many others. However, there’s a less well-known one that’s particularly relevant and useful in innovation, and it is specific to your creative thinking style.

At the heart of creativity and innovation is problem-solving. Since all humans problem solve, all humans are, by definition, creative. However, we each go about our problem solving in our preferred style, and society has come to label only one style as being “creative” – the style called “Innovator” on this assessment.

Think of Leonardo da Vinci as an extreme example of that Innovator style. He was an idea machine, constantly jumping around in disciplines including art, cartography, anatomy, botany, astronomy, geology, and others. Many of his ideas were truly groundbreaking. He conceptualized a helicopter, a tank, a calculator, and concentrated solar power. He even outlined a rudimentary theory of plate tectonics.

Thomas Edison is a great example of a creative thinker with an Adaptive style. He held more than one thousand U.S. patents. However, he did not conceptualize many of the products he patented, perfected, and commercialized. For example, he did not actually invent the light bulb; rather, he developed a light bulb that was practical. He was able to improve, fix, optimize, and operationalize ideas better than perhaps anyone else in history.

Creativity style characteristics
It is important to note that your thinking style is an indicator of preference, not of ability. Any of us can think and behave in another style, and we all do it effectively when we recognize it’s needed. But we go back to our preferred style as soon as we can. It’s where we’re most comfortable and probably where we’re most consistently successful.

The chart below illustrates some key traits of extreme Adaptors and extreme Innovators. 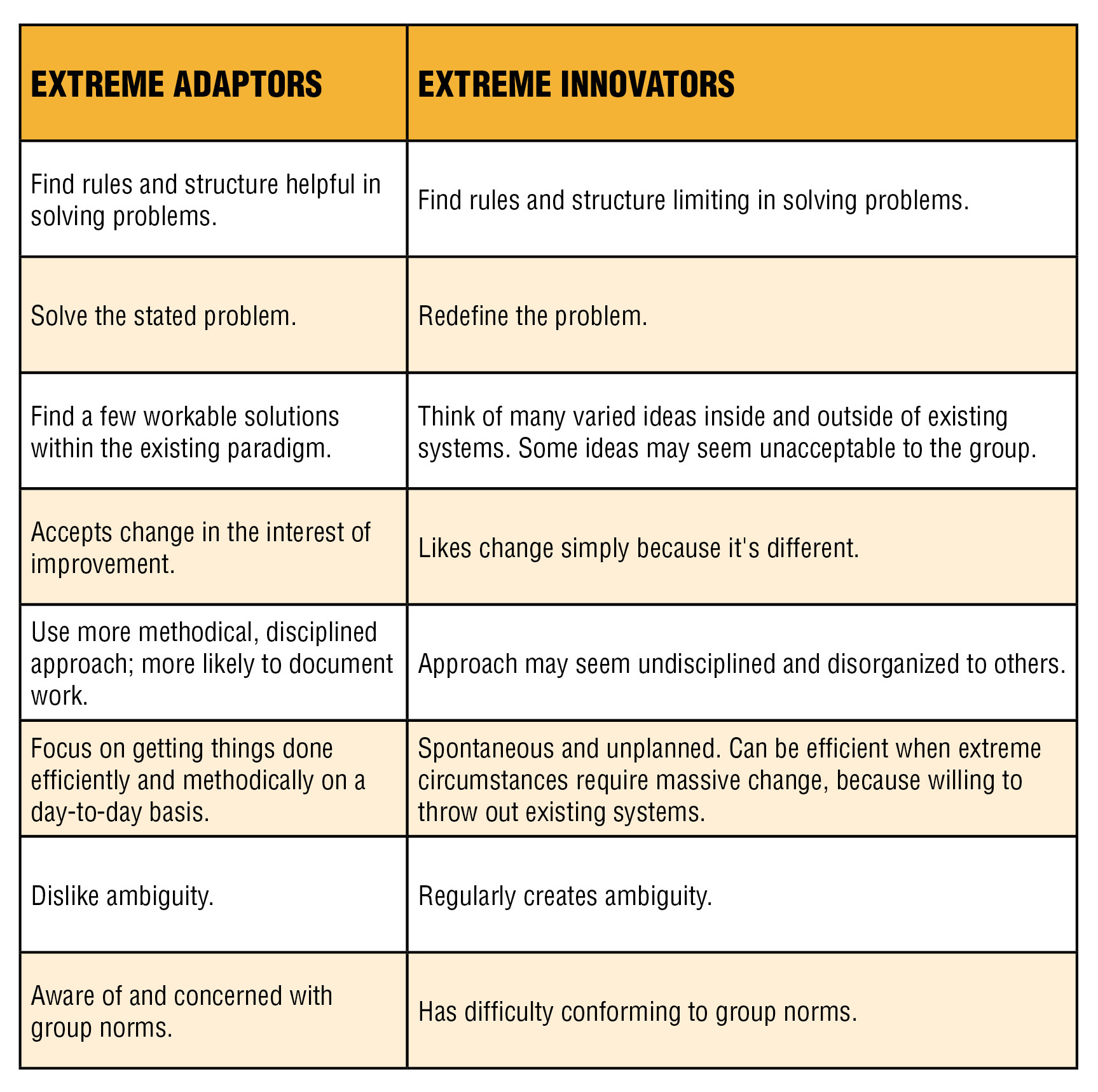 The important question becomes – who should you have running your innovation projects?

Extreme Innovators are great at coming up with ideas, and their energy and passion for ideas may get other people excited about them, at least at the beginning. But then their greatest strength – their zest and constant quest for new ideas – becomes a weakness that starts to create problems. In short, they’ll drive everyone on the team crazy and jeopardize the success of the project. So an extreme Innovator may not be the person you want to run the show. They’re one of the actors, and probably a lead actor, but they shouldn’t be the producer.

The next logical conclusion might be that the extreme Adaptors should manage the process. They’re organized, disciplined, and efficient. But their strengths can also become weaknesses at the extremes. High Adaptors’ discomforts with ambiguity will likely result in attempting to define the scope of projects too early, or it can kill them altogether if the ambiguity can’t be resolved quickly. And their focus on the stated problem may prevent them from seeing solutions or opportunities outside their day-to-day world.

So now what? If you’ve ruled out extreme Innovators and extreme Adaptors as the best candidates for managing the process, where does that leave you? With everyone else. Here’s the great news: everyone else is most of us. Sixty-seven percent of the population is in the middle of these two extremes.

If you want someone who may be naturally inclined to manage an innovation process, pick someone more in the middle, who can be a Bridger. The benefits of a Bridger in this role are numerous because they naturally exhibit moderate traits of both adaption and innovation. With a Bridger, you get a bit of the best of both.

They “get” the vision of the big idea that the extreme Innovator came up with. They’ll be excited and energized about ideas. They can live with ambiguity for a while. But they also see the need for organization and documentation. They’ll understand the challenges to be solved to implement that big idea. They can stay focused and see projects through to the end. They’ll understand group norms and will bridge the communication gap between the high Innovators and the high Adaptors on the team.

The problem may be in getting these people to understand that they are the ones who should be running the innovation process. Since they’re not high Innovators, they haven’t had people telling them their whole lives that they’re creative thinkers, so they may not think of themselves as a good fit for innovation. The role of those responsible for innovation in your company should be to convince those in the middle that they’re needed in the innovation process – and help them see how their unique contributions can be incredibly valuable in this arena.

Susan Robertson is a creative thinking expert with over 20 years’ experience speaking and coaching in Fortune 500 companies. She is an instructor in applied creativity at Harvard University. For more information, visit https://susanrobertson.co/.