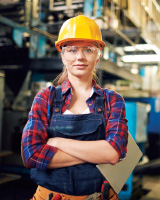 With projections showing the industry will need 1.7 million more engineers and computing professionals to fill positions within the next 10 years, the low number of women in those fields is growing as a top concern among industry leaders and educators.

Diversity in the workplace has long been proven to lead to better outcomes. But, in this case, it has become a concern that there won’t be enough qualified applicants if companies are virtually limited to one gender to fill those spots, according to the authors of “Solving the Equation: The Variables for Women’s Success in Engineering and Computing,” a report recently released by the American Association of University Women (AAUW) and supported by the National Science Foundation, AT&T, and the Mooneen Lecce Giving Circle.

Although an increasing number of women are showing interest in STEM (Science, Technology, Engineering, and Math) subjects, the report revealed, only 12% of today’s engineers are women. Studies also showed a disturbing trend among women in computing. Their percentage in the field actually dropped—from 35% in 1990 to 26%.

According to various reports, some of the obstacles that have hindered progress include:

As part of its 65th annual Engineers Week celebration, TE Connectivity recently talked about the issue of boosting inclusion and changing perceptions about the field.

“We tend to think of innovation coming from a lone genius, but it comes from people working together, collaborating and co-creating. If you don’t get a diverse bunch of experiences to solve a problem, then you get into group think,” Rob Shaddock, TE Connectivity chief technology officer, said as part of a webcast. He said TE fosters an inclusive environment by openly discussing the need for diversity and being deliberate with initiatives, including asking for a diverse slate of applications when recruiting for engineering positions.