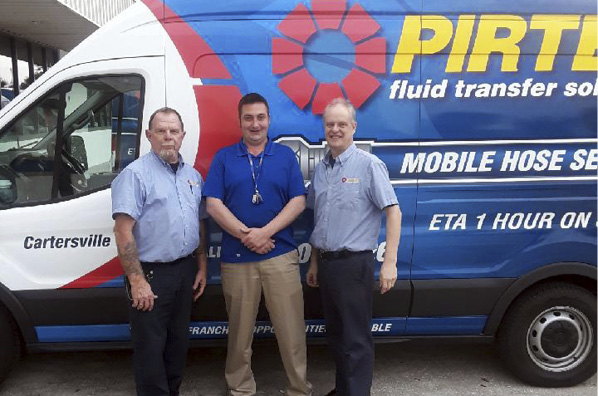 PIRTEK, a fluid transfer solutions company, has added a mobile-only franchise in Cartersville, GA, north of Atlanta. Owner Matthew Gary worked as a technician at PIRTEK Red Oak in Atlanta before deciding to start up a location of his own.

PIRTEK Cartersville operates under the company’s Tier 2 model, which allows a franchisee to keep inventory in a small warehouse or storage facility and to lease two vehicles at a lower point of entry. Under the standard Tier 1 model, a franchisee opens a full Service & Supply Center staffed with six team members and a minimum of two Mobile Service Vehicles.

The plan for Tier 2 franchisees is that they grow into a fully staffed and outfitted Service & Supply Center within three years. Each new Mobile Service Vehicle in the fleet widens the franchisee’s exclusive territory.

Cartersville lies on the northwestern edge of metro Atlanta between the cities of Marietta and Rome.

Gary, who worked at PIRTEK Red Oak for six years, has a diverse background that includes flooring and structural welding.

Gary will depend largely on manufacturing, construction and recycling centers for his customer base. Besides PIRTEK Cartersville and PIRTEK Red Oak, the company has two other franchises in metro Atlanta: PIRTEK Dobbins (Marietta) and PIRTEK Norcross.