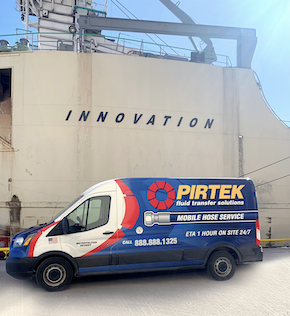 A team of PIRTEK service-and-supply-center owners completed several projects over the past year on ships in the Great Lakes region.

Tom Fechter, owner of PIRTEK Menomonee Falls, Wisconsin, completed a massive job on the barge Integrity, which needed custom-fabricated hoses and fittings for the replacement of 258 hoses.

The ship’s owner, Andrie Inc., had liked Tom’s proposal and his idea to use PIRTEK service and supply centers to support the company’s fleet of ships. The proposal included a customized tagging matrix and log to simplify future hose maintenance, and an emergency hose-replacement guide for use at sea. Tom’s team won the Integrity job, which they completed in April 2019.

Andrie requested bids for work on the Integrity’s sister ship, the Innovation, and its tugboat, stationed in Detroit. Ed Cushing, general manager of PIRTEK locations in Michigan, and his team won the Integrity job for the winter of 2020. Ed’s team was hired to switch out 73 hose assemblies outside the Integrity. Managed by Kirt Begeman, the work was completed on Feb. 25 by onsite technicians Cody Burmeister and Phil Ritchey from PIRTEK Westland, Michigan. To prevent lake water contamination during transfer, they used a hose-making cart to make new hose assemblies on the ship’s deck. 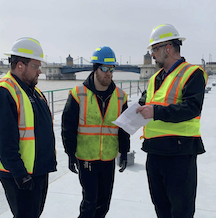 Ed and Tom’s teams have worked on other vessels in the area, including the U.S. Coast Guard cutters Hollyhock and Bristol Bay, icebreakers in the Great Lakes.