Test Your Skills: Opening Up About Closed Loop Control 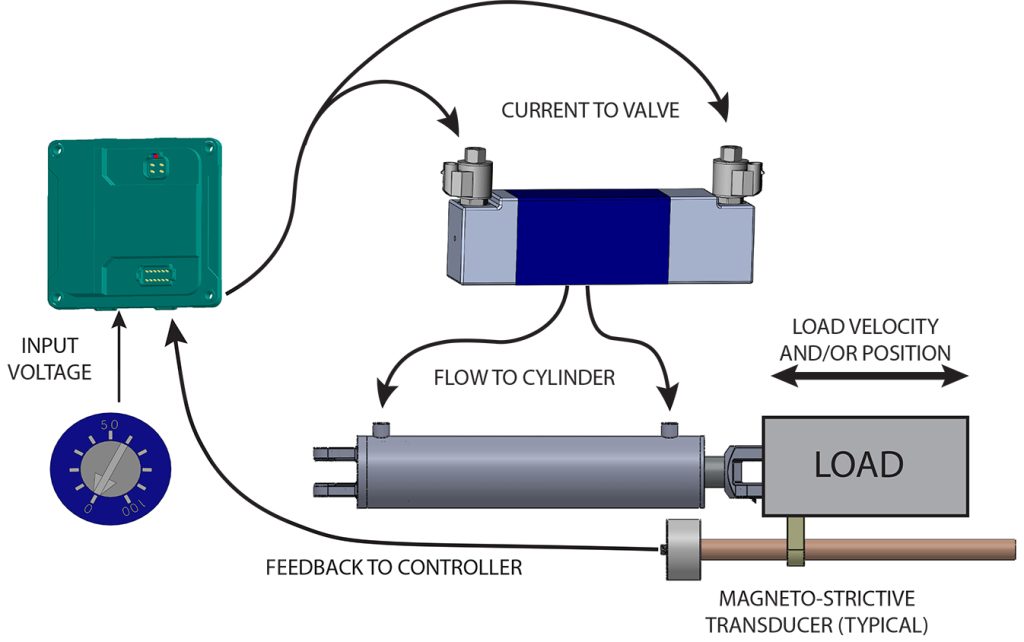 When accuracy and repeatability are important to a process, such as when an actuator is required to follow a predetermined position profile, a closed loop control system will typically be necessary. In this system, the actuator position (or other variable) is monitored, and a feedback signal is sent back to the controller and evaluated for further corrective action (see figure 1).

To better understand closed loop control theory, the example of cruise control in an automobile is particularly applicable. In vehicleswithout cruise control, the driver must monitor the speed by way of the speedometer and make corrections to accommodate external disturbances, such as head or tail winds and the uphill or downhill grade of the road. Other factors, such as varying vehicle weight, the condition of the engine, or the road’s surface condition, must also be taken into consideration. The input signal that controls the speed is the pressure of the driver’s foot on the accelerator pedal; the more pressure on the pedal, the greater the vehicle’s speed. The driver is essentially the closed loop control system (cruise control); however, there is no accurately predictable or repeatable relationship between pedal position and vehicle speed. As with many machine processes, open loop control can be an acceptable means of regulating speed if the vehicle were driven on a flat surface without external disturbances and with no variations in load. The accuracy of the system is directly affected by the driver’s ability, experience, and attentiveness. Similar to the control of a machine, driver fatigue can make open loop cruise control an unreliable and sometimes ineffective method to control vehicle speed. 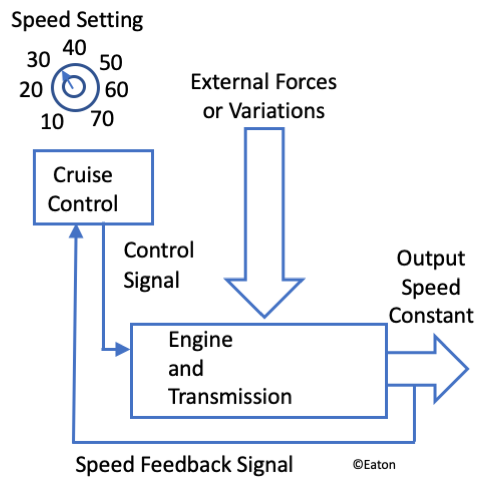 A cruise control system that includes a feedback sensor allows the driver to set the desired speed directly. As shown in figure 2, the sensor measures system output, and the feedback signal is sent to the cruise control system for comparison to the input signal. The difference is sent to the engine throttle as a control signal where the throttle will open or close until the output signal (actual speed) equals the input signal (desired speed). Should the vehicle experience an external disturbance such as a head or tail wind, climb or descend a hill, or encounter a road condition that would cause a change in speed, the difference between input and feedback signal would result in an error signal sent to the cruise control. Once again, it would cause the throttle to open or close until the actual speed equals the commanded speed.

Many machines and processes are open loop systems but are operated in a closed loop manner where the machine operator represents the closed loop. A true closed loop system monitors the system output and compares it with the input. Then the system automatically corrects for any difference without human intervention.

In the control of fluid power, there are many types of closed loop systems to control, including position, velocity, force, pressure, or possibly any combination thereof.

Figure 2 shows a block diagram of a position control using a closed loop electrohydraulic system. The controller develops a command signal proportional to the desired spool movement. A transducer at the valve spool or the actuator relays information about whether or not the action occurred. If the action has not been completed as directed, the feedback signal indicates the variance, produces an error signal, and the command is corrected to achieve the desired result.

Troubleshooting a closed loop control system can be subdivided into software (amplifier, tuning) and hardware (controllers, input devices, valves, and feedback sensors). Tuning a closed loop system is beyond the scope of this article.

Troubleshooting hardware may consist of confirming that power is applied to the inputs and sensors as well as measuring the output of the devices. Troubleshooting the simplest devices may involve measuring the resistance, voltage, or current output of the device. Sensors with integrated electronics that output digital signals may need to be connected to a computer or specialized instrumentation to be able to verify and measure that the output is correct.

b. The closed loop system is for pump motor systems only.

c. The controller compares a feedback signal to the commanded input value.