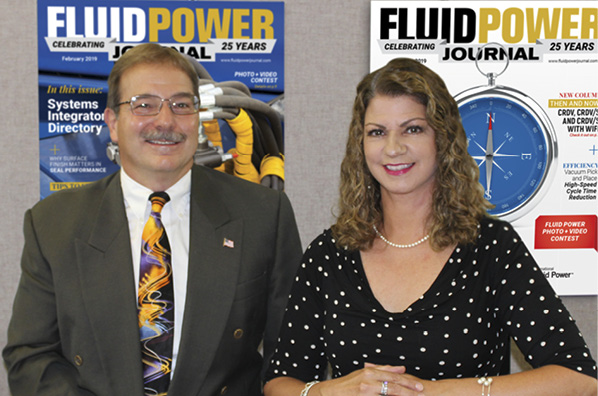 By Paul and Lisa Prass

Here we are with 25 years behind us since our journey began creating and producing the best industry trade journal.

As I write this for our 240th issue, I reflect on our teams’ journey.  It has indeed been quite an adventure.

In the early beginnings circa 1993, my then-fiancée Lisa Wertman and I spent a lot of time (months) refining the concept of developing an incredible publication for the Fluid Power Society, one that would strive to bring as much relevant news as possible to our industry’s readers.

The publication was the brainchild of the Fluid Power Society, and at that time I was serving on the Board of Directors and Jim Morgan was the Executive Director. There were key members of the Executive Committee, notably George Nordenholt and Fred Brown, that developed a vision to create a new publication.  Lisa and I had designed and created several membership directories for the Fluid Power Society, but weren’t quite ready when the Society asked us to start a magazine.

I remember the day quite well. It was at the 1993 FPS Spring Meeting when the team delivered the charge to us. A multitude of emotions shot through us on that magical day in Orlando – excitement, elation, purpose, fear, and new beginnings.

At that time, we had no clue about how to produce such a large publication and how it would be published several times each year.  I remember the look of fear on Lisa’s face when I told her the first issue would need to be 56 pages (it actually turned out to be even larger at 72 pages).  She and I had marketing experience and a love for printed materials. Myself from learning about printing at Warren Central Career Center in Indianapolis, and then in the marketing department at The Rexroth Corporation where I worked with outstanding men like Alfred Krug and Tom Frankenfield in developing data sheets, brochures, catalogs, trade show graphics, and more for the company. Lisa hailed from Rodale Press Inc., which at the time was the publisher of many magazines including Men’s Health and Prevention, where she worked before being hired at Rexroth to design their publications and advertisements.

I remember the months leading up to our inaugural issue in January of 1994. There was a lot of work to be done, and there were countless people and fluid power companies that helped turn our vision into a reality. There are way too many people to name, but a sincere thank you to all on behalf of the IFPS!

Of course, with any worthwhile endeavor, there were several challenges along the way. Some that were almost insurmountable and terrifying, although many people helped us through those times, two key people were Dave Prevallet and John Groot.

As I view our nation today, it makes me even more thankful and proud to have worked with the men mentioned above. They have a tremendous amount of character and were always committed to making the publication work and wanted the best for everyone in our industry.

Our team is honored to serve you, our readers, and we are ecstatic to be able to publish the Fluid Power Journal monthly this year!  The magazine has had wonderful success for 25 years, and the next goal is to continue to produce the best industry trade journal month after month for the next 25 years and beyond.

Thank you to the Fluid Power Journal’s readers, our advertisers, our supporters and The International Fluid Power Society!

Tagged 25 year anniversary, paul and lisa prass, then and now